If anyone thinks that I’m talking as if Manchester United have already won a record 19 titles, it’s because I am. There is no way on Gods earth that they will let it slip now after brushing aside their only remaining challengers Chelsea 2-1 at Old Trafford. For make no mistake, the final scoreline was in no way a true reflection of their complete superiority over the reigning champions. As Sir Alex Ferguson made it clear afterwards “We do it all the time, take it to the very wire, we could’ve scored six in the second half! We had lots of chances but we expected a tough game and got a tough game. I thought we were brilliant and it was a fantastic start. Petr Cech made two fantastic saves but it was a good team performance. When we gave the ball away for their goal, understandably it was a bit nervous around the thing but the fans helped us a lot” he said in tribute to the United faithful who helped United get over the line. “They were magnificent in the last 10-15 minutes when we needed them” he declared “they were fantastic.”

Sir Alex emphasised that those nerves should have been settled well before the final whistle “We kept creating chances and Wayne Rooney could’ve scored six. Credit to the players because they deserve it. We just need one point now and knowing the players, they will get it – there’s no doubt about that” he said without the slightest hint of doubt. “Blackburn are fighting relegation and Blackpool as well so we’ve got 100 percent respect for those two great clubs. They’re neighbours and I don’t see them going down but we have to do our job and, if we get a point, I’ll be delighted. To win 19 is fantastic, to be the most successful team in the country in terms of championship victories, and the minute we won for the first time in 1992, the door opened for us and it’s an incredible achievement.” How can anyone possibly argue with him? 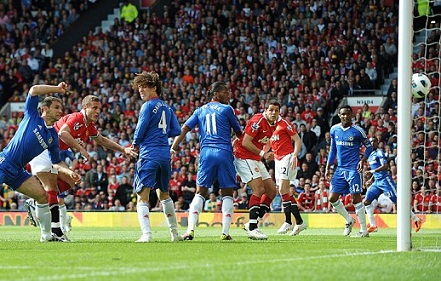 The Telegraph – Manchester United celebrated like champions at Old Trafford after a 36-second opener from Javier Hernandez and a Nemanja Vidic header took them to the brink of a record 19th league title. One point from the final two games against relegation threatened Blackburn next Saturday and Blackpool on the final day of the season will be enough to seal a championship which will take them past the mark Liverpool have been on for so long.

Sir Alex Ferguson felt victory over closest rivals Chelsea was worthy of a couple of bows to the Stretford End as he knows, as do all United’s rivals, the prospect of them not getting over the line now is unthinkable. Built up as the title decider for a week, so important Ferguson selected a shadow side for a Champions League semi final, these matches are so often a disappointment. Not this one. Not when United were ahead so quickly. Indeed, Chelsea were resigned to their fate long before the final whistle, with United knowing they could be celebrating history at Ewood Park next Saturday just as Manchester City are taking the field for their first FA Cup final in 30 years Full Report

The Guardian – The title is Manchester United’s in all but name. Arithmetic states that another point is required, away to Blackburn Rovers or at home to Blackpool, but the matter, in effect, was settled here. Chelsea, the reigning Premier League champions, were forced to confront their own inferiority at Old Trafford. The narrow score misrepresented the authority of Sir Alex Ferguson’s players, who had scored after 37 seconds.

Few would have anticipated that United would exercise such domination of Chelsea. Michael Carrick maintained order in midfield to establish a basis for control but the fixture did not have an academic or technical tone. Ferguson has weighed up these foes and come to the conclusion that there is no need to treat them with particular caution. Chelsea were stretched by the movement of United Full Report

Manchester Evening News – Manchester United are on the brink of a record 19th League title after delivering another knockout blow to Chelsea. Having beaten the London side in the Champions League quarter final, United moved six points clear of their closest Premier League rivals with just two games remaining. Mexican strike sensation Javier Hernandez gave the Reds the perfect start with a goal after just 35 seconds before Nemanja Vidic headed in the second after 23 minutes.

Frank Lampard pulled a goal back for Chelsea midway through the second half, but it proved only to be a consolation. While the result did not reflect the trouncing that had been inflicted, everyone present understood United’s superiority Full Report

Can we please NEVER AGAIN hear about how many United shirts Ji-Sung Park has sold in Korea?