Unless he makes an unlikely reversal, Manchester United’s Edwin van der Sar will make his Old Trafford farewell on Sunday afternoon against a Blackpool side keen to ward off Premier League relegation. A win in front of the United faithful by the new champions will be a fitting home send off for the 40 year old goalkeeper with the decorated Holland international set to retire from football in summer. The veteran is then set to make his final United appearance at Wembley next Saturday against Barcelona in the UEFA Champions League final.

Blackpool however will hope to spoil the party for the sake of saving their continued top flight ambitions. The Tangerines travel to Old Trafford in 18th position on the table, level on points with Birmingham City and Wigan Athletic. They need to secure a better result than two of the three sides immediately above them if they are to have any hope of avoiding the dreaded drop. 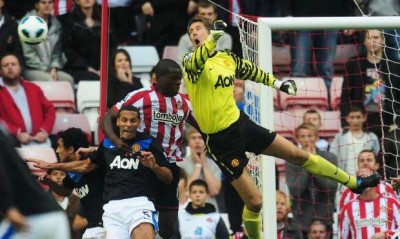 Manager Ian Holloway is not counting on next weeks Final providing any comfort for his side “I don’t think anything is a distraction for Manchester United, they’re the best team in this country. They’ve proved it and they have been for years and years and years” he admitted.

Despite that much anticipated showdown at Wembley, Sir Alex Ferguson has confirmed that the likes of Darren Fletcher, Paul Scholes, Anderson, Dimitar Berbatov, Patrice Evra and Van der Sar will all play on Sunday.

And those players will be hungry to fight for a spot in the starting line up for the European showpiece, whilst the club will want to finish the season unbeaten at home in the league.

An additional incentive for Berbatov would be securing the golden boot award for the top Premier League goal scorer. The Bulgarian is currently tied on 21 goals for the season with Manchester City’s Carlos Tevez. Blackpool, meanwhile, should have a full strength squad for their do or die, final game of the season.

Irrespective of the outcome, this will be an afternoon of celebrations for Manchester United fans – and a fitting Old Trafford farewell for van der Sar. I also cannot help but have a gut feeling, nothing more than a sixth sense mind you, that Paul Scholes and Ryan Giggs MAY also give their goodbyes to their career long fans.

How difficult will it be for Sir Alex to replace VDS?

2 thoughts on “VDS bids farewell to Old Trafford against Blackpool”