Book Review – The King is coming back

Despite a flurry of early activity in the transfer market by Sir Alex Ferguson, the most exciting news of the week for older Manchester United fans may be the announcement that Eric Cantona will be returning to Old Trafford with his New York Cosmos for the Paul Scholes testimonial on August 5 – and why not?

Despite a flurry of early activity in the transfer market by Sir Alex Ferguson, the most exciting news of the week for older Manchester United fans may be the announcement that Eric Cantona will be returning to Old Trafford with his New York Cosmos for the Paul Scholes testimonial on August 5 – and why not? The man who became known as The King was only at Old Trafford for a short 5 years but his lasting impact is still being felt today. During that comparatively small span, Cantona’s dedication and self confidence enabled a club to emerge from over a quarter of a century of failure and self doubt.

Cantona’s career before he arrived in England had been nomadic at best, self destructive at worst. He blazed a trail through French football but the highest profile incidents centred on his spectacular misbehaviour and clashes with authority. By the time he was snapped up by Leeds manager Howard Wilkinson in early 1992, he seemed to have burned most of his bridges in France. A Truly Reds review of one of the best ever football books The Rebel Who Would be King was published this time last year and can be read HERE 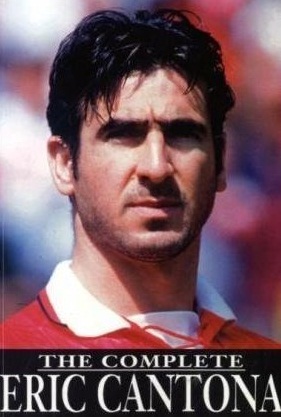 A lucky phone call was the catalyst for Cantona’s £1.2m transfer to United following a brief Leeds career during which the Frenchman had added inspiration to a team founded on perspiration. Most Manchester United fans recognised Cantona’s class, his decisive role in Leeds 1992 title triumph and his instant hero status among its fans.

Yet few could have anticipated the quality that would shine through following his arrival at Old Trafford. For 26 years Manchester United fans had suffered under the jack boot of Liverpool’s domination of European and domestic trophies.

Cowed into submission, their fans tended to hope for the best but feared the worst, even 6 seasons of relative success under Ferguson hadn’t changed that mindset.

Cantona’s fearless attitude transformed the club almost in an instant. Never has a football club been so altered from one day to the next by one signing. Never has a club gone from ‘nearly men’ to ‘champions’ at the stroke of a pen.

All of a sudden, the boot was on the other foot and remains so to this day, over 10 years since Eric last kicked a ball in anger. This book details every game Eric played for Manchester United, Leeds United and the French national team as well as potted summaries of his career in France.

Darren Phillips, author of “The Complete George Best”, has painstakingly researched his remarkable career in France, England and in the French national team. It’s a book that can be read either as a work of reference or a detailed insight into a career that altered the dynamics within English football for good.

Was Cantona REALLY that great a United legend?

Written by Frank Scicluna
Blackburn greed will bite them on the bum
Why have Blackburn got their knickers in a knot?