Calls for Sir Alex to Lord it over British football

A motion calling for Alex Ferguson to be made a Lord has been tabled before the House of Commons. Manchester’s Blackley and Broughton MP – and United fan – Graham Stringer has put forward the Early Day Motion calling for Fergie to be given a peerage. 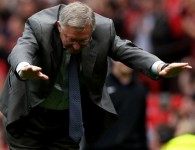 A motion calling for Alex Ferguson to be made a Lord has been tabled before the House of Commons. Manchester’s Blackley and Broughton MP – and United fan – Graham Stringer has put forward the Early Day Motion calling for Fergie to be given a peerage. The EDM, also signed by Manchester Central MP Tony Lloyd – a fellow Red reads “This House recognises the economic, social, cultural and sporting importance of football to the United Kingdom, it is therefore surprised at the paucity of representatives from the world of football in the Upper House. It further notes that Sir Alex Ferguson, as the manager of Aberdeen and Manchester United, is the most successful manager in the history of British football and calls for him to be recommended for appointment to the House of Lords.”

Mr Stringer said “If the House of Lords is there for anything, it is to represent people who have been extraordinarily successful in as many walks of life in this country as possible. Football is not represented at all and Alex Ferguson’s claim to be the first football lord is overwhelming because he’s been the most successful football manager the British Isles has seen.”

“Football is no longer just the working man’s game” he continued “it permeates every level of society. You can’t go anywhere without having a conversation about what’s happening in football. It’s a national obsession.” A United spokesman said “It’s an interesting idea and he would certainly keep them on their toes.”

MUST chief executive Duncan Drasdo said “MUST fully backs the motion and believes Sir Alex would be thoroughly deserving of such a major honour in recognition of his immense achievements – not least his most recent – displacing Liverpool from their perch. If Sir Alex does become Lord of Old Trafford the feedback we’ve had tells us United fans will be delighted for him – as long as it doesn’t interfere with his day job.”

Published by the Manchester Evening News on June 17, 2011

Does anyone have any objections to Sir Alex Lording it over football once he retires?