Book Review – Angry Keano will always be a legend

“Happiness is not being afraid” says Roy “I don’t play football to be famous or a celebrity.” Aggression must be met with aggression. His family and friends seem to exist to “make it easier to go to war, which is what I do for a living”

Of the multitude of Old Trafford legends, Roy Keane remains one of the all time greats. Despite his faults – and it must be said that he had many, the man represented everything fans admired about a Manchester United player. As far as the United faithful are concerned, Sir Alex Ferguson has never been able to replace the Irishman which may explain why his 2003 Keane: The Autobiography has resonated so well with so many.

It has been described as ‘One man’s war against his own past’  in which author Ray Ryan finds Keane unrepentant, relentlessly angry but revealing “We have had splits before” Ryan admits “there was feisty Queen Maeve and fearless Cú Chulainn, Parnell and the Catholic church, even the Official and Provisional IRA. But nothing, nothing, prepared us for Keane versus McCarthy. In an age of rapid change, enduring proof that the split remains high on certain Irish agendas” 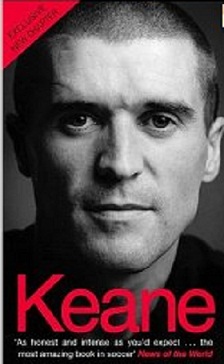 Eamon Dunphy’s version of Roy Keane goes something like this. In 1971, in a country paralysed by economic pessimism and political apathy, unemployment and emigration, Roy came among us. Suffering under the hands of bungling Irish football administrators, he rose from the Cork working class to be seated at the right hand of Alex Ferguson. Sleek of loin and fearless in combat, he has comprehensively buried all rivals. His departure from the 2002 World Cup, in a specially chartered plane, leaving his ungrateful persecutors earthbound, is his final ascension into a lonely realm of greatness.

Of current Irish athletes, only Aidan O’Brien’s dual Derby and King George winner, Galileo, is worth more at stud. Keane’s undiminished status in Ireland is partly responsible for the disappointing lack of post-World Cup back-stabbing, finger-pointing and recrimination. If one man could change that, it is professional controversialist Eamon Dunphy. Sometimes it feels as if Dunphy has at one point or another insulted everyone over the age of six in Ireland. When he appeared legless on RTE at 9.30am during the World Cup, it seemed merely a continuation of this lifelong policy by other means.

Dunphy’s imprint is felt throughout this unrepentant, relentlessly angry book. His tone – utilitarian, workmanlike – replicates Keane’s style of play and doesn’t bear much comparison with sportswriting greats. In Managing My Life, co-written with Hugh McIlvanney, Alex Ferguson describes seeing 12-year-old Ryan Giggs for the first time “floating over the pitch… He carried his head high, as relaxed and natural on the park as a dog chasing a piece of silver paper in the wind”. That “silver” is pure McIlvanney, connecting the athletic with the aesthetic, registering Ferguson’s belief in football as a performance art. Dunphy has no room for this kind of lyricism.

Dunphy’s Keane, initially small, rejected by several clubs, coming to football late, relishes the despotism of fact and graft. Football is “savage”, a relentless industrial cycle of commitment and injuries, of bullshit (mentioned 19 times), and bollockings (10); less instinctive athletic expression than a suppression of a permanent fear of failure. “Happiness is not being afraid” says Roy. “I don’t play football to be famous or a celebrity.” Aggression must be met with aggression. His family and friends seem to exist to “make it easier to go to war, which is what I do for a living”.

Smart alecks will suggest Keane has written one more book than he has read. That would be unfair. Keane travels from being just another emigrant “Irishman” – Brian Clough’s label for him at Nottingham Forest – to “Roy Keane”, one of the few sportsmen immediately identifiable by their first name.

The transition from an up-and-down midfielder to complete footballer at the world’s second most famous club – Celtic being first in his opinion, is an exhausting, never ending process of personal evaluation. For all his anarchic passion, Keane offers a forensic description of his calculated, meliorative shift from that two dimensional jobber into a player who patrols every inch of his workspace with peerless authority.

Alongside beguiling summaries of drinking sessions with Bryan Robson and Steve Bruce “lazy, inebriated afternoons that stretched way past sunset” – Dunphy’s input was doubtless particularly useful here – these are some of the book’s best passages.

This compelling book is primarily about football, about winning matches and titles season after season, but it gives anoraks the off pitch details we crave. Eric Cantona drinking champagne only and never carrying cash. The reaction to the death of a Crystal Palace fan in a fight with United supporters “Do we search our souls? The truthful answer is no.”

Keane must now, apparently, be judged. How to defend him after the Korean debacle after apparently sending Haaland deliberately into orbit, and after last week’s elbow to the new Irish captain Jason McAteer – latest instalment in Keane’s continuing war against his own past?

Well, all great artists are defined by the demons they unleash – Keane would dismiss this statement as “bullshit”. He is not of course the first Irishman to be accused by the British press of inflicting physical damage on a beautiful young boy. Wilde would sympathise with his current Haaland predicament. Blonds, litigation, even references to intercrural sex.

But if we make the dubious assumption that “the Brits” are not behind the fall of another Irish leader, what exactly is Keane guilty of? Does his refusal to fight and fail for his country on foreign fields actually make him a principled post nationalist, very much in the mould of the Good Friday agreement?

Laudably, he does not believe in the Great Man theory of history: one thing this book does is to tell Jack Charlton to retrospectively stick it up his bollocks too. And isn’t Keane’s lack of unconditional reverence for a sacred English custom such as the FA Cup rather New Labour? Why is he difficult for asking why millionaire footballers should room together, with all the scope for frustration that can generate?

The fact is, Keane has all the financial trappings of Celtic Tiger success but none of its cultural confidence. He has the good sense to be embarrassed by the rewards available to footballers. For all his undoubted Cork pride, he seems frightened of being “found out” and sent back to its bleak 1970s housing estates. And who wouldn’t?

Professionalism, attention to detail, preparation, control, managing situations – these are emphasised throughout. But most football supporters have a Keane-shaped hole inside them for precisely the opposite reasons. In spite of his millions and his doctorate, Keane retains some baser Sunday morning pub-league instincts.

The ruthless professionalism coexists with an enormous appetite for physical conflict, commitment, attrition, revenge for defeats – just how fans want players to think. Supporters and clubs want opponents to bear a Keane-shaped mark. How else explain Patrick Vieira, Steven Gerrard and Lee Bowyer?

Fifty years hence, some brave revisionist will doubtless put Korea 2002 into a sober context, sucking the tragic dimension from Keane’s divorce from the nation. Just let them try. Mick McCarthy’s appalling management skills are here persuasively documented: quite apart from picking the wrong team, and putting Duff in the wrong position, he failed to note the Spanish were down to 10 men in extra time!

So Korea 2002 takes its place in the great what-ifery of Irish history: what if the French had landed in 1798? What if Easter 1916 had worked? What if McCarthy had basic maths? The nation that gave the world Arkle and Beckett deserved better.

Eamon Dunphy knows that history is written by winners. Keane finally rationalises all its subject’s faults and virtues into one tidy, undefeated package. Football, though, is not war, and shouldn’t always be about confrontation, revenge, an eye for an eye.

Another former Irish captain, also now unable to play for his country, could explain these distinctions: Neil Lennon, recently forced by Loyalist death threats to retire from international football with Northern Ireland.

Keane’s “hunger” makes him an inspiring footballer and a sometimes dismaying person. Only Alex Ferguson emerges unscathed from the swingeing attacks in this book. Will the war continue? Soon, there will be no one left for Roy to fight but himself. Which may be progress, of a sort.

God created only one Keano. Be grateful.

Keane: The Autobiography
by Roy Keane (with Eamon Dunphy) and Michael Joseph