Manchester United manager Sir Alex Ferguson has shrugged off potential concerns over the youthful back line that will spring up against Tottenham at Old Trafford on Monday. Left back Patrice Evra returns after missing the opening win at West Brom and will be the guiding hand alongside Phil Jones 19, Jonny Evans 23, Chris Smalling 21 and new 20 year old goalkeeper David de Gea.

Ferguson has every confidence in his young guns confessing that “I don’t see it so much as a challenge they are facing, more this responsibility because they’re in important positions. Of course they don’t have the experience of Rio Ferdinand, Nemanja Vidic and Edwin van der Sar, you can’t beat experience” he continued “top level players with experience are vital. But we don’t have them, yet we’re confident in the players who are replacing them. 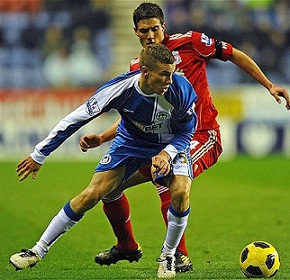 They have the potential, temperament and courage to play, there’s no doubt about that. So I don’t see it as a worry for me at all. I’m more looking forward to Monday rather than worrying about it. I think they’ll do very well.”

Ferguson has even suggested that if new boy Jones, a £16.5million buy from Blackburn in the summer, Evans and Smalling perform to the level he expects, he will face a selection dilemma when Vidic and Ferdinand return from injury.

Ferdinand, who limped off with a hamstring injury at West Brom, is due to return against Arsenal next Sunday. As for Vidic, he is not due back until the middle of next month at the earliest after he too made an early exit at The Hawthorns. Ferguson added “When they’re both fit, or one of them is fit, then I’ve a decision to make, and I know they’re both aware of the abilities of the other players”

Smalling admits injury victims Vidic and Ferdinand will be missed but he’s also backing the young guns to cover their absence effectively. “It is disappointing” he told ManUtd.com when asked about Vidic’s injury. “He has been such an influential player for us over the years, especially during last season when a lot of our stability was down to him so it is important that a lot of players step up to the mark now, but he is going to be a big loss for whatever period he is out.”

“It is great that we can at least get Ferdinand back” he admitted “they are both solid at the back and hopefully Vida will be back sooner than everybody thinks. There are a lot of opportunities given the amount of games we play” he reasoned “there are going to be people who pick up injuries or lose form and I think it is down to us to step in and hopefully make the manager choose not to take you out of the team.”

“It’s great for my confidence to be able to feature in as many games, and hopefully a lot more games, than last season. There is always a pressure here and that drive to win, and I think a lot of the young players, including myself, will hopefully rise to that.”