United finally knocked Liverpool off  their perch last season. Following an endless supply of trophies under Sir Alex Ferguson, none meant more to United’s global legion of fans than their 19th league title – simply because it finally put Liverpool in their place. When Alan Hansen captained Liverpool to their most recent championship in 1990, the tally read 18-7 in Liverpool’s favour and few would have given the Scot a prayer of capturing one championship, never mind 12.

In ’19’, award winning journalist Harry Harris looks back at all the title winning seasons and analyses each one from the viewpoint of a player who distinguished himself in that title year, building up to the record title and an in depth analysis of the 2010-11 season and how United finally surpassed Liverpool. 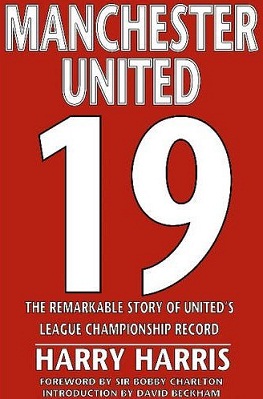 Harris is arguably the most prolific writer of best selling football books of his generation. Among his 65 titles are the highly acclaimed best seller Pele – His Life and Times, plus all The Way Jose, Chelsea Century, and a number of Manchester United books. Harry was also the last journalist to interview George Best for his final book, ‘Hard Tackles & Dirty Baths’. He has also penned The Ferguson Way and Wayne Rooney – The Story of Football’s Wonder Kid. Harry has also written a series of autobiographies for Ruud Gullit, Paul Merson, Glenn Hoddle, Gary Mabbutt, Steve McMahon, Terry Neill, and of course, Bill Nicholson.