Chief sports writer of The Sun newspaper Steven Howard had some outspoken comments to make about Gary Nevilles’ soon to be published autobiography – appropriately called ‘Red’. Manchester United fans will no doubt be interested in what one of the clubs legends has to say about his time as an England international, and it’s not flattering.  As can be expected ‘RedNev’ does not pull any punches. Neville said that many players lived in fear of criticism from fans and the media and also criticised several of the managers he played for. “There have been times when I reflected on my international career and just thought “Well, that was a massive waste of time.”

Howard begins by saying “So Gary Neville, veteran of 85 England internationals has spoken and it’s all as we told you at the time. The named, shamed and embarrassed include Glenn Hoddle, Kevin Keegan, Sven Goran Eriksson and Steve McClaren. The WAGS get both barrels as well. 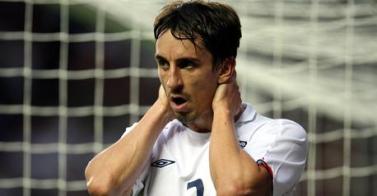 The most amusing thing of all – judging by the conclusions reached on some of the England managers Red Nev played under – is that he would have been reading the national newspapers at the time and agreeing with every word!

We all said Glenn Hoddle had a certain ability as an international boss, especially in the way he set up his teams. But we doubted whether that would be enough to offset his one glaring weakness. That he was away with the fairies. We knew about Eileen Drewery but not that Hoddle had a pre match routine that included shaking the players’ hands and touching them over the heart.

Or that during the epic France 98 encounter withArgentina, one of Hoddle’s finest hours despite eventual elimination, he had asked coaching staff to walk round the pitch anti clockwise to create positive energy. If Hoddle tended to be a bit of a Mrs Malaprop – he once talked of how football was an up and down experience of  ‘pigs and troughs’ – Keegan was a born orator who provided the national media with a ready supply of quotes and sound bites.

Yet we always said his main problem was he was too close to the players, that he wanted to be one of the boys. That he was an old school merchant, a sort of Gene Hunt throwback who loved his cards and race nights – the amount of time spent on which was described as ‘ridiculous’ by Neville.

We wrote of how his closeness to certain players interfered with discipline, his team selection and decision making. We also maintained that, though he was a fine communicator, this didn’t necessarily apply to tactics – unlike Hoddle. Neville tells a great story of how Keegan got one of his coaches, Les Reed, to give a talk aboutEngland’s next opponents, only for the manager to fall asleep in the front row.

Then there was Eriksson. It quickly became apparent he had favourites, that there was a ‘caps for the boys’ mentality. And that he was in thrall to skipper David Beckham. Here, again, Neville provides confirmation with the words “The big names were guaranteed to play rather than the best team.”

He talks specifically about the ‘quarterback’ role Beckham adopted, probably on his own suggestion in World Cup qualifiers against Wales and Northern Ireland, and how the team was put out of shape to accommodate the big players. As he said “It seemed to me like a fudge to get round the issue of how to keep Becks, Gerrard and Lampard in the same team.”

Next comes Steve McClaren. While the vast majority of us felt international football, and a fine Croatian team, found him out, Neville is a little undecided. There were also some of us who felt the former Middlesbrough boss spent a little too much time on his own appearance and how people perceived him. At one moment, Neville believed McClaren was appointed before he was ready, at another he thought he could thrive in international football.

But he sided firmly with some newspaper critics who claimed the sudden switch to 3-5-2 on the eve of the game with Croatia in Zagreb was a recipe for disaster. Then there was McClaren’s contentious dropping of Beckham. Like Neville, we all saw it as the manager making a statement and showing him as his own man. In retrospect, Neville is probably correct when he says to drop Beckham completely didn’t make sense.

As for the WAGS, they get an absolute monstering. Here again, we are all singing from the same songsheet. Rio Ferdinand subsequently spoke of how unhappy some of the Englandplayers were with the whole WAGS phenomenon. But not in the acerbic tone Neville adopts.

He calls it the one farcical issue of Eriksson’s reign, how some people saw a tournament as not a series of matches but a photo opportunity. And how it had grown into a monster by Germany 2006. Sportswriters penned articles on how the sudden WAGS culture was alienating certain players and undermining the entire World Cup campaign.

News reporters and news desks back home, though, were ecstatic at having something with which to fill their papers now that, thankfully, the hooligan problem had evaporated. Neville also spends some time on his role in the threatened strike by the England squad over Ferdinand’s dropping from the side following his failure to attend a drugs test. While some commended his actions as ‘all-for-one and one-for-all’ backing for a friend and colleague, others saw the huge irony of multi millionaire footballers going on strike.

Finally, what of the way ahead? Here we are united again. In a famous Sun Sport headline over a South Africa 2010 preview of mine were the words ‘This lot win the World Cup? Please, let’s get real’.

Now Neville says “I don’t see us competing seriously for a major tournament for at least 10 years. We still have a lot of catching up to do.” Equally chillingly, he says of the so called Golden Generation, of which he was an integral part “I’m not convinced we ever had the strength in depth to win a World Cup or European Championship.”