The boys are back in town – or should that be the men? One of the expected title challengers were made to look like boys as Manchester United swept Tottenham Hotspur aside in a comfortable 3-0 victory at what has become an impregnable Old Trafford fortress. Manager Sir Alex Ferguson was full of praise for his side afterwards saying “That performance was absolutely fantastic. It was very even in the first half  but in the second we just took off. I’m pleased with the young side – it showed we still believe in young players and also, you can see the ability they’ve got. Danny Welbeck is a rangey, long legged boy, he gallops really quickly and has a great attitude.”

“Dimitar Berbatov and Michael Owen, Javier Hernandez and Wayne Rooney” Sir Alex continued “they all have different qualities and you have to utilise the team as best you can. It’s going to be a big problem for me.” What a great problem to have Sir! 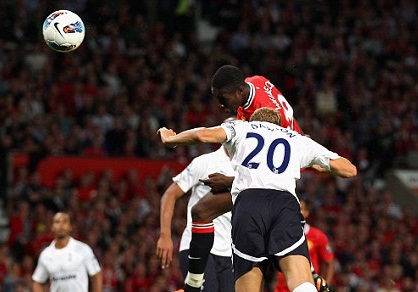 Tottenhamhotspur.com – Our Premier League season got underway with a defeat as three second half goals sealed victory for Manchester United at Old Trafford. Goals from Danny Welbeck, Anderson and Wayne Rooney came after an enterprising start to the second half by the team but, when the first goal came, United picked up the momentum and the outcome of the game seemed unlikely not to end up in favour of the home team.

Harry Redknapp made just one change from Thursday night’s Europa League play-off, first leg win at Hearts, but it was a notable one as Brad Friedel came in for Heurelho Gomes for his Spurs debut. Jake Livermore made his first Premier League start alongside Niko Kranjcar in central midfield and Kyle Walker got the nod at right-back. Full Report

Manutd.com –  There’s no substitute for experience, although energy and enthusiasm are going a long way at Old Trafford at the moment. Sir Alex may not be able to call on the likes of Edwin van der Sar, Paul Scholes or Gary Neville anymore, but in the place of cool heads the boss now has pace, power and, judging by this performance, no small amount of panache.

Against Tottenham Hotspur at Old Trafford on Monday night, United’s kids – we can call them that: the side Sir Alex sent out was the second youngest he’s ever fielded in the Premier League – ruled the roost and goals from Danny Welbeck, Anderson and Wayne Rooney handed the Reds a victory built as much on vim and vigour as patient passing or tough tackling. Full Report