As one of his strongest fans since the time he was at White Hart Lane, it’s not easy to ask the following question but “Does Sir Alex Ferguson still need Dimitar Berbatov at Old Trafford?” Perhaps more to the point “Does the Bulgarian still need Manchester United?”  I’m really beginning to wonder! A brilliant player who most managers would give their right arms for, one who could walk into most starting lineups in the Premier League AND Europes leading clubs, a joint Golden Shoe winner just last season, is lately being left to languish on the bench before occasionally being belatedly introduced for a short cameo appearance! WHY? Does it make any logical sense? Perhaps it does!

Let’s look at some facts. Sir Alex Ferguson was quoted as freely admitting after the 3-0 demolition of Tottenham Hotspur on the weekend that  “If you look at Berbatov, Owen, Hernandez and Rooney, they all have different qualities” he said “you have to utilise all that and make changes as best you can. The horrible part for me now is with having Javier back, what do we do? It is going to be a big problem for me”  Youthful talent like Federico Macheda and Mame Biram Diouf can also possibly be added to that impressive list. 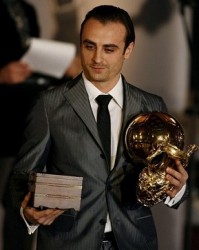 So what SHOULD the wily Ferguson do? Michael Owen has already had his contract extended until the end of the 2011-12 season so he will be safe at least until then, Kiko and Diouf may again be loaned or sold outright but if Ferguson decides to keep both at Old Trafford, where does it leave Berba?

The talented Bulgarian has stated more than once that  “There is nowhere else to go after Manchester United” and fully intends to finish his playing career at Old Trafford. If Berbatov really means what he says, there can only be one outcome. The remainder of his contract will be allowed to run down – including a further 12 month option that Chief Executive David Gill insists is in place, then Berba will simply end his playing career and possibly become part of the National team coaching set up in his beloved Bulgaria. An all round win for Berbatov, his country and United.

Is that a scenario which sounds feasable?