Sir Alex Ferguson will be delighted after Manchester United were handed a relatively easy task for the group stages of the Champions League. The Premier League champions were pitted against Portuguese side Benfica, Swiss outfit Basel and Romanian newcomers Otelul Galati. Club chief executive David Gill believes that “Sir Alex will be happy with that. We’ve had great success in the last few years in the competition and we’re looking forward to it”  Gill said after the draw in Monaco.

Newcomers Manchester City have been handed a tough task in Group A in their first ever foray into the Champions League. They play German side Bayern Munich who have won the tournament four times, Spanish side Villarreal and Italy’s Napoli. 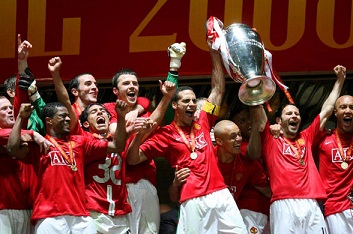 Arsenal who qualified by beating Udinese on Wednesday, will face Marseille from France, Greek side Olympiakos and German champions Borussia Dortmund in Group F.

London rivals Chelsea have been drawn against Spanish side Valencia meaning an instant return to his old club for their new recruit Juan Mata. German side Bayer Leverkusen and Belgium’s Racing Genk are also in Group E.

In other groups, holders Barcelona will face seven time winners AC Milan in their group. Pep Guardiola’s Spanish outfit will also face Belarus minnows BATE Borisov and Czech side Viktoria Plzen in Group H as they bid to claim the trophy for the third time in four years.

Jose Mourinho’s Real Madrid are reunited with three time winners Ajax from the Netherlands, who they beat home and away in the competition last season. French club Lyon and Dinamo Zagreb from Croatia are also in Group D.

2010 winners Inter Milan have been drawn with French champions Lille in Group B and also face a tricky trip to Russia to face CSKA Moscow. Turkish side Trabzonspor, who replaced Fenerbahce after they were removed from the competition over match fixing claims, make up the group.

At the ceremony in Monaco, Barcelona’s Lionel Messi claimed the Best Player in Europe award “I’d like to thank all the people that voted for me and all my team mates” the 24 year old told UEFA’s official web site “I keep all these awards at home and I still have some space for more. It’s an honor to be so successful and to come up with the goods at the right time”

The first games in the Champions League group stage will take place on September 13 and 14 following Uniteds away Premier League game at Bolton and followed by the clash with Chelsea at Old Trafford. It should prove to be an interesting week.

Are you comfortable with the challenge handed to United?