Sir Alex says Wenger must get a fair go

Sir Alex Ferguson has confirmed that Darren Fletcher is ready to make a return to senior duties and will be considered for Sunday’s squad to face Arsenal. The Scottish midfielder emerged unscathed from Thursday evening’s Reserves victory over Swansea and the manager told his pre match press conference that Fletcher is ready for his first senior outing of the season.

Ferguson also leapt to the defence of the Gunners embattled manager Arsene Wenger “The work he has done in the 15 years he has been at the club is the best in Arsenal’s history” he pointed out “Yes, he has not won a trophy for six years but what does that mean? The quality of his side has not been reduced so it’s a bit unfair” He then slammed the critics by saying “but who understands fairness and unfairness these days? Supporters are far less easy to please than they were 20 years ago” 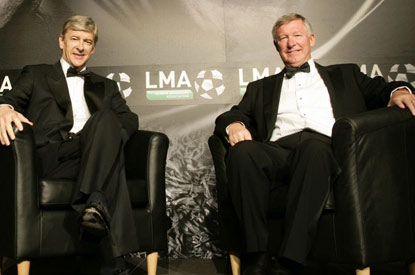 “On the injury front, Darren Fletcher played a game last night which is great news” he said “I think the boy is back now. He’s had a terrible time but now he’s looking terrific and he’ll be in the squad for Sunday.” In other news, Sir Alex confirmed that Rio Ferdinand and Antonio Valencia are ‘training well’ while Nemanja Vidic is out for a month and Rafael will miss even longer with his dislocated shoulder.

Despite those ongoing absentees, Ferguson declared his side ‘in healthy shape’ and revealed that Chicharito – fresh from his substitute outing against Spurs – is fit to start even though the form of Danny Welbeck presents ‘a problem’ in selecting Wayne Rooney’s strike partner.

“Chicharito came back on Monday which gives me a tremendous problem for picking a side” Sir Alex admitted “but that’s the kind of problem we want.”

As for the Gunners, Wenger has Gervinho, Emmanuel Frimpong and Alex Song suspended while Jack Wilshere is still injured.