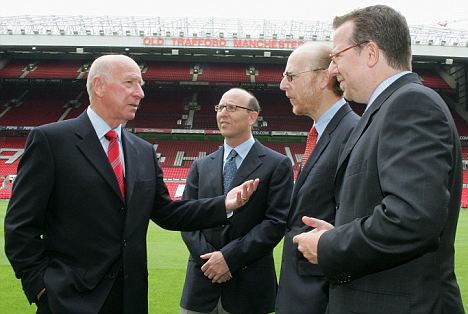 Glazer family was asked by The Manchester United Supporters Trust (MUST) to use the income from their proposed Singapore Stock Market flotation to remove the club’s huge debt.

Although MUST have constantly opposed the Glazer families ownership of Man United, they are impressed with the latest revenue figures that were revealed yesterday by commercial director Richard Arnold.

MUST were also happy with how Sir Alex Ferguson managed to collect a record 19th title and a place in last season’s Champions League final with minimal investment in his squad and they now want the debt to be totally cleared to see you United back as a considerable financial force in football.

“The commercial team at United are clearly smart operators and we welcome continued growth in the business but to be fair we’ve seen growth consistently year after year long before the Glazers took over,” they said.

“Without the incredible performance on the pitch and the fantastic loyal support of thousands of match-going fans, as well as millions more around the world, there would be no platform on which to build the growth of the business.

“So while the financial results are strong, they also show that the Glazers have taken another £51m out of the club in the last 12 months as well as using an even bigger chunk (£64m) of the club’s money to pay down part of their bond debt.

“This is money that the club has generated and money that should stay in the club rather than go to Florida or to pay down the Glazers’ debt and interest.

“That’s why we’re calling on the Glazers to use any share sale in Singapore to clear all of the club’s debt – debt that they put on the club and they must take responsibility for.”

This comes from record revenue of £331.4million – an increase of £45million from last year and passing £300million for the first time.

Commercial turnover for the Premier League title winners and Champions League finalists reached £103.4million, with match-day turnover (£108.6million) and media (£119.4million) also up and Net debt is down to £308.3million due to the club’s vast cash reserves.

As the New York post stated, United can make around £1.82 billion when the Premier League champion is floated on an Asian stock market.

Will the glazers clear the debt after the flotation?