Youth has once again been given its head under Sir Alex Ferguson and Tom Cleverley is one of those ‘kids’ who has figured in all of the Reds’ opening fixtures. Despite rave reviews, including comparisons to midfield greats of the past, he told Nick Coppack from United Review and ManUtd.com that he’s keeping his feet on the ground

It’s been a busy start to the campaign for you… Yeah, I suppose it has, but getting into the team has always been my target and I’ve done that now. Maybe it’s happened a little bit more quickly than some people expected, but I have to carry on working hard now if I want to stay in the team. I understand there’ll be squad rotation but I want to play as many games as possible. 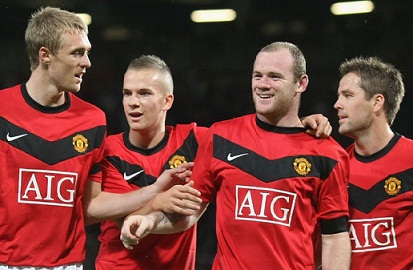 From the outside, your rise seems meteoric… It’s been more a steady progression. Although I feel I improved during this pre-season, I’m still the same player and I’m still the same guy. Just because I’m playing in United’s first team, that doesn’t all of a sudden make me a great footballer. It’s a bit strange when people are talking about you and you see your name in the papers but in my head I’m still the same footballer who was sent out on loan toWigan last year. The only difference is that I’m turning out for Manchester United now.

So ‘the new Paul Scholes’ tag doesn’t sit easily…Ha, no. I don’t think you can compare anybody to Paul Scholes. He was a great player and an individual and that’s what I want to be as well. I want to make my own name in the game.

Do you welcome the added attention?…Like I said, not a lot’s changed for me. I don’t feel any extra pressure. I’m just coming to training every day and playing when asked to at the weekend. I definitely don’t feel as though I’ve made it. I’m still enthusiastic and hungry to learn. If people are saying good things about me then that’s great. It’s better than being criticised! Even though you’ve been at United a while, the first-team dressing room is new territory.

How are you settling in?…It’s been fine. There aren’t too many new faces for me to get used to. I knew Phil Jones from England duty, the same goes for Chris Smalling and Danny Welbeck. I spent my whole summer with those guys. With Danny, in particular, it’s great because we’ve grown up together at United. There are a lot of young lads in the team at the moment and they’re all in a similar situation to me so that’s helped me to settle in. We’ve all played our part already this season, and hopefully we’ll continue.

Is it exciting to be part of a young squad Sir Alex believes will improve?…Definitely. Nobody wants to get too carried away, this is a youthful squad and it’s exciting to be part of it. But we have to remember we’re only a month into the season and there’s a long way to go. Some of us younger lads don’t know what it’s like to win the Premier League yet but that’s where the experience of the others comes into it. A few older players left the club in the summer yet we’ve still got experience in abundance. Our young legs should mean we don’t have any fitness problems either.

United have impressed over the last few weeks with some scintillating football… We look really good going forward and we’re very fluid. The versatility in the squad means that almost anybody can occupy the forward positions and we can swap about on the pitch, it must be a joy to watch. On the pre-season tour we were almost scoring goals at will and against City it was so enjoyable to play at Wembley and be involved in that second goal.

Jack Wilshere had a real breakthrough campaign in 2010/11. Do you look at that as a blueprint for the season you hope for?…Yeah. Jack did fantastically well last year – it was a bit of a freak season for him really. But I wasn’t surprised by it because I know the quality he’s got from playing with him for England Under-21s. He made that central midfield position his own at Arsenal and I want to do the same at this club.

Did you see the ‘Who needs Wesley? We’ve got Cleverley’ banner at West Brom?…I did! Wesley Sneijder is fantastic but if fans think that then I must be doing something right. I’m from Basingstoke not Manchester but I’ve grown up here and know what this club means to the fans. If they get behind me like that then I’m buzzing.

You swapped shirts with Andres Iniesta after the pre-season clash with Barcelona, what have you done with it?…It’s at home. I didn’t realise at the time but they didn’t have their names above the shirt numbers in that game so that’s a bit disappointing. He’s a top player though and I was pleased to get his shirt. He’s somebody I can watch and get a lot of tips from.

Whose idea was it to change your number from 35 to 23 and which number would you eventually like to wear?…I really like 23 so I’m not sure if I’ll want to give this one up. The manager offered me 22 or 23 but due to superstition I prefer wearing odd numbers. Also, David Beckham was my idol growing up and he wore 23 at Real Madrid and still does with LA Galaxy.

Will Sir Alex be vindicated for sticking to his young guns?