So, another review is here, the good people at PR Genie have decided that more time and 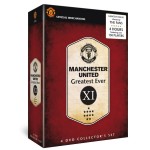 devotion shall be spent on my couch as I trawl through some obvious, some surprising,and some downright ridiculous candidates for the best Manchester United XI. In stark comparison to the otherwise impressive Rooney Goal Machine, the opening titles and graphics have a slight air of class about them, less Europa League, more Champions League perhaps. Loud classical music blares triumphantly with the overblown grandiosity of a late ‘90s SKY Sports advert. The basic format is from a competition invented by the club’s website in 2011 where fans vote on the best players for each position, based on what I’m guessing is a rigid 4-4-2 formation.

Here lies the problem, fans, at the risk of sounding cruel, the young blond kid who refers to Nemanja Vidic as “The Terminator” and appears to pick him solely because “I’ve had his name on my replica shirt 2 years in a row” would probably get murdered by a Gab Marcotti or a Henry Winter in a complex discussion on the merits of zonal marking, or how Schmeichel compares to Zoff, Yashin or Banks. Again the young girl who appears to only comment on players who played from the turn of the millennium onwards doesn’t offer much insight, combine that with the fella that pulls out a pretty bizarre analogy between Steve Bruce and a cake it can come across as a little embarrassing. The usual names for GK position are mentioned, Stepney, Van der Sar, Schmeichel, Wood and Gregg, followed with a montage of also-rans who seem to be mentioned in almost an apologetic manner, chiefly Gary Walsh, yep, that’s right, Gary Welsh for best United goalkeeper. Following this is a brief trip through history with just about every goalkeeper at the club since the Bank St Newton Heath days, up until the era of Britain conceding the Sudatenland. History lesson, it is not, the pseudo pundit fans don’t know these old keepers, neither would most of the viewers, we all know they won’t be selected in the final XI, so it may as well be an episode of Spongebob Squarepants if they really want to pad this out a bit. On to defenders, as always centre halves are split into 2 categories, good cop, bad cop. Pallister, McGrath and Ferdinand are all pacey, they read the game well and are “Rolls Royce” players. Bruce, Vidic and Moran are hard, tough and put their head in. We all know the world will end should you have 2 good cops or 2 bad cops, so it’s pretty safe to say, one from each of these trios will be picked. Honourable mentions go to Foulkes, Duxbury, Buchan, and… Brown (unbelievable..).Full backs again seem to be several diamonds amongst a quagmire of nostalgia and early dementia, Dunne, Irwin, Gary Neville and Shay Brennan perhaps, less so for Silvestre and O’Shea, at that point I called it a night, ready for disc 1 tomorrow, midfielders.

Next course is Midfielders, disc 2. More of the same really, it follows the same formula as the previous offering again with words of wisdom from fans behind clips and facts about our midfield heroes, heroes such as Anderson, Butt, Carrick and Fletcher, indeed. Perhaps the best part of this segment is the footage of Eddie Colman and Duncan Edwards. If like me, you have been indoctrinated from an early age that the Busby Babes (particularly Edwards) were some of the best players Britain and Ireland have produced, you will no doubt be frustrated that more of their talent wasn’t immortalised on film. There is some excellent footage of these two, happily they also resisted the temptation to open the floor to some of the younger fan’s opinions on these guys, elitist, yes I know, but I’d find it pretty hard to take the opinion of a 16 year old talking about a player from the 1950s. The comments are left to the “older fans”, each one reaching more or less with the same conclusion, we were lucky to watch them, England suffered without them. Great footage of key performances, Keane in Turin, Robson versus Barcelona and Kanchelskis’ City hat trick follow, despite this, there is a sense, like disc 1, sentimentality has ruled, chiefly with the notion of Nicky Butt being among the best United have had to offer since its inception. The now customary trip back in time is taken, Meredeth, Duckworth and Mitten all getting a token mention without any fan insight as yet again, nobody on there is old enough to remember them. Aside from this, there are enough stars listed to raise a lot of questions and debate amongst your friends, picking United’s midfield is no easy task, Best, Ronaldo, Giggs, Keane, Scholes, Robson, the list stretches on and on, and leaves you with simply no idea who will make the final XI.

So, over the halfway point, we come to the fans chance to nominate the best two strikers for our illustrious club. So, who would you pick? Obvious choices are Law, Charlton (incidentally I expected him to be in the Midfielders category, but hey, what do I know?), Cantona and Hughes. More modern greats are discussed, Rooney and of course RedDeadPodcast’s favourite, Ruud van Nistelrooy. Yorke and Cole are discussed with surprising sincerity, and some sentimental shouts aimed at Ole and Sheringham’s way, it’s incredible really, after the likes of Viollet and Taylor (and the now customary history lesson in Donaldson, Cassidy and West) it’s a fairly consistent and comprehensive list of every striker up until the quite incredible selection of Javier Hernandez. Don’t get me wrong, I love the little pea, but one full season and he’s in contention for greatest United XI? I’m all for provoking debate but that’s too far even for me, can’t help but feel that selection on the DVD is to keep our younger fans happy. Whinging aside, as we move through the Charlton, Law days, into the realm of Macari, Jordan and Stapleton, onto Cantona, Rooney et al, you can’t help but feel spoilt really at the quality we have had in our front line, plenty of amusing stories from our faithful talking heads, none more so than a man discussing the unlucky event of meeting his wife over a Lawman autograph. There are well over 10 choices for these two wonderful places, including a Mr M Robins, shall I say it again? No, I’ll restrain myself, we all know there really are only about 5 players to choose from, but for the first time in this DVD, I really was struggling to guess which two the fans will pick. I’m at great risk of committing the cardinal sin of unveiling spoilers, so we won’t go much further.

So, the end of our journey is upon us, disc four, and we now find out who the fans selected. We join four of our legends, Stepney, Robson, Macari and McIlroy, a pretty even spread across the clubs history, and believe me, you would rather spend an hour listening to these lads then the last three with the fans. Now don’t worry, I’m not going to tell you who made it, I was genuinely surprised by some choices, and some had me nodding in agreement, we’ve all had this exact discussion with our friends, it’s a wonderful subject that creates debate and (friendly) arguments. They also create laughter and bring back wonderful memories, watching the goals scored by van Nistelrooy took me back to 2003, watching Peter Schmeichel between the sticks took me back the mid nineties, and that’s what these things are all about, a key factor in deciding who makes the cut is how they made you feel at the time. Michael Owen is not always the most popular player at Old Trafford, never in a million years to be considered in such a list, but when he scored in the 96th minute against City, a memory was created that’ll last until the end of my days.

Overall, the at just shy of £25 (no sign of a Bluray release), and weighing in at around 4 hours worth of viewing, I guess it’s not bad, it could have been executed better, a few of the fans offer no insight, but it’s made up for with the humour from some of the others. The history lessons seem unnecessary and smacks a bit of filler, and there are some bizarre choices as candidates, but other than that, it’s four pretty solid hours of happy memories and humorous anecdotes, particularly from our four ex players at the end. I’d recommend watching with a few friends, the whole point is swapping stories, memories and arguing about these things, it’s what makes being a Manchester United fan such a privilege, so many great players, so little positions… 6/10.

5 thoughts on “Greatest United XI, Busby Babes and The Terminator”