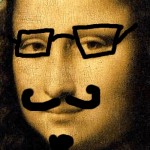 What do footballers and football fans have in common with the Mona Lisa? Well I wouldn’t be asking the question if the answer wasn’t “something”, would I now?

In his book Irrational Exuberance, the Yale economist Robert Shiller explains how the inherent psychological characteristics of human beings and their application to social situations and, well, life, cause irrational stock market and housing market bubbles, with a bubble being where an asset (such as a share in a company or a house) is valued at an amount that is greater than what it is actually worth (think of the famous Tulip-mania in 17th century Holland, those silly Dutch buggers).

Certain economic theories (such as the Efficient Markets Hypothesis) believe that the value that is assigned to a share that is traded in a free market will equal what the share is worth at a fundamental level (which in financial theory is, “the present value of the future cash flows associated with that share”. Just rolls off the tongue, doesn’t it?). So basically, nothing is under or over-rated.

The author cites several reasons for why bubbles develop and markets over or under value stocks or shares, whether it be herd behaviour caused by excessive optimism or pessimism, poor decision making due to the cognitive biases of individuals (see the “anchoring effect”, amongst others), self-sustaining feedback loops of information (think of distortion at a rock concert) and, relevant to this article, media reports and word-of-mouth causing a kind of social contagion or epidemic.

On p164 of the book, Shiller talks about the mathematical theory of the spread of disease, and how such mathematical models can be used to better understand the transmission of attitudes and the nature of the feedback mechanism supporting speculative bubbles. He provides an example of an ant colony exploiting two separate food sources, and how there is no central direction towards one of the sources; the ants either “recruit” by contact or by laying a chemical trail, the ant equivalent of word-of-mouth communication.

He then goes on to say, “Although disease spread and ant behaviour are of theoretical interest in our consideration of stock market bubbles, of greatest practical relevance is the fact that epidemic models have been applied by sociologists to predict the course of word-of-mouth transition of ideas. Here the infection rate is the rate of communication of ideas, and the removal rate is the rate of forgetting or of losing interest.

Many of us recall the children’s game of telephone [I think the Yank means Chinese whispers], in which the first person selects a simply story and whispers it into the ear of the second person, who then whispers it into the ear of the third, and so on. When the story is finally told to the group by the last person in the chain, the distortion of the original story is often so dramatic as to provoke laughter. The person-to-person transmission of stories of any complexity is just not very reliable”.

I’m sure you can see what I’m getting at when I say that this article is geared towards the reputations that have been acquired by certain footballers. But how does this relate to the Mona Lisa? To quote p167:

“The effect of story quality on the contagion of ideas can have a real impact on market value. Why are certain paintings valued so highly among others? When I took my older son to the Louvre, and we viewed the Mona Lisa, he expressed puzzlement that this painting should be considered so much more valuable than the others. He said it was undeniably good, but it did not stand out among all the other remarkable paintings. We then found ourselves betting that many people in the crowd viewing the painting were saying much the same thing to each other – in whatever language.

To understand the exaggerated value of the Mona Lisa, we must consider the powerful word-of-mouth potential of a certain story about that famous smile, apparently created by embellishment in word-of-mouth transmission from a story that first appeared in Giorgio Vasari’s biography of Leonardo Da Vinci, written shortly after Leonardo’s death. The story, which now appears in many forms, is that the artist had difficulty capturing the model’s smile; he worked on it for four years but never felt had had fully succeeded.

In his original biography Vasari reported that Leonardo tried musicians, singers, and jesters to get the model to assume the correct expression. Vasari said that the smile in the painting “was a thing more divine than human, and it was held to be a marvel”. Vasari’s description of the painting does not seem to match the Mona Lisa that we see today, so there may be some confusion; the story might actually be from a different painting. But no matter: the story is attached to that painting in the Louvre today.”

It goes on to talk about two events in 1910 that exacerbated this; the publication of Sigmund Freud’s book that uses the Mona Lisa to examine Leonardo’s subconscious, and the theft of the painting from the Louvre. Basically, the shit hit the fan. Big time.

So you may be thinking that, okay, this might explain why players from decades and decades ago (such as Dixie Dean or Garrincha), of whom fantastic tales have been told, may be overrated, but surely we’ll be much more rational in analysing a player today, who we can see play in front of our very eyes? After all, evaluating the ability of a football player is a lot easier than evaluating the future cash flows associated with a share in a company.

Well you’re wrong(ish). The problem is that word-of-mouth, and what someone you know tells you about a player, will affect your subsequent analysis of that player when you come to watch them. This cognitive bias is known as “confirmation bias”, and is something that football fans commit en masse.

Or perhaps the guy next to you doesn’t rate Carrick? He gives him abuse all game, calls him useless, rubbish etc, and the guy next to him may start think the same as well. Eventually this may spread, and most of the guys in your block are going to be talking about how shit Carrick is. Well, you’ll think to yourself, all these hardened season ticket holders, who have the red of Man United flowing through their veins, they can’t all be wrong, surely? So you agree; Carrick must be shit. And you’ve reached this decision all because of the opinion of one man, who may be right or may be (and in this case is) wrong.

But surely there are some widely-held footballing beliefs that must be true? Take Rooney, for example. He’s a great all-rounder right? As good going forward as he is getting back and all that? Well, according to ww.whoscored.com, this may not be the case:

This is why Danny Finkelstein’s column in The Times, the Fink Tank, deserves much wider press than it currently gets. I know statistical analysis (or “Sabermetrics”) is only a means to an ends and not an end in itself, but such statistical analysis can help dispel widely held myths that one day could easily become gospel to football fans.

All of this cognitive bias may also mean that certain types of player, in hindsight, are remembered for being better or worse than they actually are (people are more likely to look back with nostalgia at Henry’s goals than they are van Nistelrooy’s). After all, our perception and opinion of an entire 90 minute football match can be determined by a few random events. Consider England vs Spain from the other night for example; if Fabregas hadn’t missed that sitter and Villa’s shot had gone in off the post we’d all be lamenting a typical English collapse against superior opposition. As it was, England got away with it, and we’re all talking about a brave performance from the Three Lions and how Spain need to stop whinging (although to be honest, they really should).

Another thing I’ve noticed is that if you sign for a new club, make sure you have a good first few games. Take Anderson for example, he’s been living off those first few performances (particularly the one against Liverpool) for years, and every time his stock drops to a low level he easily replenishes it with a run of a few good games against some mediocre opposition.

Then take Fletcher. He struggled for a while, was seen as the epitome of mediocre in his early days, and it took him years of consistent strong performances against all manner of opposition in order to turn his reputation around. Or think of Darren Gibson. Whilst I don’t think that he has the ability to succeed at United in the long-term, it seems to be the case that he’s going to have to play a lot better than Anderson for a lot longer if he wants to have a reputation that’s even on par with that of the overweight Brazilian.

Lionel Messi benefits from our irrational behaviour as well. If a player from a lower division side scores a gem of a goal, we’ll talk about how amazing the goal is, but we won’t call for that player to be designated a deity. If Messi scores such a goal people from all around the world implode into their own sense of ecstasy and bewilderment. It appears that the cliché, “If Messi scored that goal you’d be calling the guy a genius” is an accurate one.

And don’t get me started on the Gareth Bale bubble from last season.

So why have I gone on this 1,800 word pseudo-psychological ramble about share prices, the Mona Lisa and the reputation of footballers? Well myself and my Truly Reds comrade, Liam, were watching some DVDs on United’s greatest ever players the other day (and Liam’s review, which is a good one, should be up soon), but the images before me ending up re-surfacing an age old question that’s been bothering me for a while.

Rooney or Cantona? Rooney. Or Cantona? I think we need to think carefully about this one.

3 thoughts on “Irrational exuberance, football fans and the Mona Lisa!”