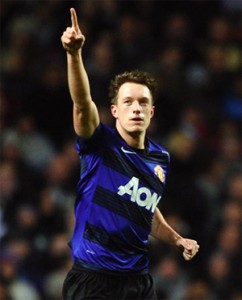 The last time I wrote an article, it was to describe a very troubling, disturbing and traumatic defeat against our neighbours, Manchester City who to their credit are making the right noises SO FAR. However, how many times have we seen off our challengers to emerge champions next May? Aston Villa, Blackburn Rovers, Newcastle United, Liverpool, Arsenal, Chelsea and counting.  We have bounced back from being trashed to win league titles too so who is to say that we wouldn’t do it this season? There is still a lot of football to be played between now and the end of the season and anything is still possible.

Let’s now analyse how Manchester United have done post the black day of 23rd of October 2011. In the English Premier League, we have won 4 matches out of 5 and we have scored only 1 goal in each of the 5 matches. We have returned to being our solid self of last season eking out 1-0 wins without looking anything like the side that was playing free-flowing football and scoring goals for fun at the start of the season. I personally feel it is necessary to restore the confidence that was shattered from the trashing we took at home and there’s no better way in doing that than by keeping clean sheets and picking up 3 points.

The one game that we did drop points, against Newcastle, we were unlucky to concede a non-existent penalty and failing to put the ball into the back of the net with the number of chances we created. In that game, we probably created more chances than we did in the other four matches. Our performances have been improving proved being the way we dominated Aston Villa at Villa Park yesterday however it is a concern that we are not creating enough chances to score and at 1-0, we can very easily concede a goal and allow the opponents back into the game such is the flimsy nature of the score line.

Moving onto the Carling Cup, United responded positively and comfortably in their 3-0 win over Aldershot Town but then came a shocking display at Old Trafford against old friends, Crystal Palace who caused us many problems whenever we have played them in the 90s. With our nearest, “dearest” and greatest rivals, Liverpool and Manchester City winning against top-class opponents in the form of Chelsea and Arsenal away from home the day before to progress into the semi-finals, the onus was on us to follow them through but we lost after a draining extra-time. The nature of the defeat was galling as Crystal Palace more than matched a much rested and depleted United side which still had internationals and ex-internationals in its ranks. We never really dominated Palace or create much in terms of clear-cut chances which is something that I have noticed in recent matches regardless of the competition we are playing in and we were knocked out in the quarter final stage itself.

Finally, in the Champions League, we beat Otelul Galati at home, which was expected but the nature of the performance wasn’t impressive as we laboured and found it tough going. Next up were Benfica in a game that we needed to win to secure top spot and confirm our qualification into the knockout rounds. Benfica had already caused us problems in our first game in Portugal and have never been easy opponents for United. They took a fortunate early lead but we responded and we responded in style only to give away the lead with a mistake at the back almost straight-away after taking the lead. We couldn’t respond a third time and we ended the game with one point in a game that was entertaining for the neutrals but left United’s qualification still very much in the balance to the frustration of United fans all over the world.

Our most immediate task would now be to confirm our qualification to the knockout rounds and maybe even topping the group if results go our way. All United need from their match against FC Basle in Switzerland would be a point to confirm qualification but to have a chance of finishing top, United need all 3 points. When the draw was made in September, much talk was about how United have got it easy but personally I have never believed  that United have got it easy as United were facing teams with their own hidden dangers. Moreover, it is never easy in Europe as all it takes is a drop in concentration, a mistake here or a poor performance there for a team to be punished. Frankly, United have not been at their best in Europe. Last season en route to the final, United only conceded 4 goals but have already conceded 6 goals in the group stage itself this season. We have been conceding far too many goals in Europe and opponents who come to Old Trafford have a sense that they can have a go at United which reduces the fear factor that Old Trafford holds for them. Playing in Basle in the final game is not going to be easy. I remember how we struggle to cope with the slick playing surface and the vociferous crowd when we went there in the 2002-03 season but eventually we overcame them with 3 goals in 6 minutes. Looking at the way Basle played at Old Trafford, we would be in for a tough time as the Swiss side has a youthful team that plays fearlessly and would go for a win in front of their home crowd needing a win to qualify. Therefore, we would need to show Europe the real United to qualify and stand a chance to qualify top. I BELIEVE.

In terms of performances, the focus has been on keeping clean-sheets and keeping it tight at the back which has worked largely in England but not so in Europe having conceded twice against Benfica at home. Defensively, I would say there has been a marked improvement in our performances helped by the return of Nemanja Vidic and Rio Ferdinand. Phil Jones’ versatility has helped as he has been consistent wherever he has played; right back or centre back. Fabio’s performance has not been great the entire season and has not improved baring a sporadic improvement in some matches. His brother, Rafael has just returned from injury and is injured again. Chris Smalling has also just returned from injury and was impressive keeping the speedy and tricky Gabriel Agbonlahor in his back pocket for the entire game against Villa. Jonny Evans has been shaky and inconsistent as usual but still capable of performing well in some matches.

In midfield, Tom Cleverley has been greatly missed, more than I expected when he initially got injured against Bolton Wanderers. The difference he brings to the side in midfield with his energy and probing can be seen when he returned to face Aldershot Town and Everton. My heart sank when he had to be replaced during the Everton game due to injury. Anderson who formed such a productive partnership with Cleverley at the start of the season has a lengthy lay off till February. The much-maligned Darron Gibson returned against Crystal Palace and I felt he didn’t do too badly but the lack of creativity is apparent. Michael Carrick has returned and returned to form and he has been a vital inclusion to the team and is the only one who can provide the creativity from the middle of the park. There are the options of the experienced Ryan Giggs and Park Ji-Sung who both are getting back into form to provide added creativity and let’s not forget the energetic Darren Fletcher who has been finding it tough to establish a foothold in the side after his spell out due to illness last season.

Our wingers, Ashley Young, Nani and Antonio Valencia who have been productive and in good form especially Ashley Young and Nani at the start of the season have seen their form drop and they have not been quite as productive with assists and goals lately. Up front, Wayne Rooney is on a barren run but has still been productive and energetic but perhaps he is on a barren run due to the lack of chances created and because he has been deployed further away from the front line. Javier Hernandez’s stop start season continues with a lengthy lay off picked up in the game against Aston Villa twisting his ankle innocuously. Similarly, Dimitar Berbatov, who has been playing a fringe role this season, twisted his ankle after going up for a header in the game against Palace. Such is the misfortune that we are suffering from. Michael Owen is out for a lengthy period too. Danny Welbeck has returned from injury at a vital time and a good run of form could see him keep his place and with Federico Macheda and especially Mame Biram Diouf having not impressed in the Carling Cup game against Palace, United might play with only one striker or alternate with two or maybe give either Macheda or Diouf or both the chance to salvage their reputations and potentially their career with Manchester United in this period of time especially with matches coming thick and fast now.

Personally, together with the defensive solidity that we have been acquiring, I hope United’s engine will start warming up and start producing more attacking performances with more goals. Basically a return to our early season form with greater defensive strength. However, trophies are not won in December so I would settle for a few more 1-0 wins and leaving United to hit top form in the New Year and show everyone in England and Europe who we really are.