As most people around the world, unwrapped their Christmas gifts and opened the boxes to see what is in store for them, there was a big box awaiting Manchester United at Old Trafford, the Theatre of Dreams. At the end of 90 minutes, United found out what Santa had given them for Christmas; 5 goals, 3 points, dropped points for our rivals and the helping hand from referee Phil Dowd in sending Wigan Athletic’s Conor Sammon off in the 40th minute. Maybe with his belly, Phil Dowd probably thought that in the spirit of Christmas, he would assume the guise of Santa for the Old Trafford faithful. 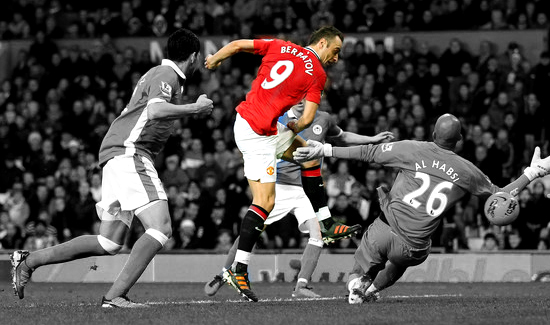 As most people around the world, unwrapped their Christmas gifts and opened the boxes to see what is in store for them, there was a big box awaiting Manchester United at Old Trafford, the Theatre of Dreams. At the end of 90 minutes, United found out what Santa had given them for Christmas; 5 goals, 3 points, dropped points for our rivals and the helping hand from referee Phil Dowd in sending Wigan Athletic’s Conor Sammon off in the 40th minute. Maybe with his belly, Phil Dowd probably thought that in the spirit of Christmas, he would assume the guise of Santa for the Old Trafford faithful.

We ended the game joint top, level on points with our neighbours Manchester City and we are now 5 goals away from reaching their superior goal difference.  Overall, it was a very good day at the office and Dimitar Berbatov, who has been used sparingly so far this season got the gift of the match ball as he struck a hat-trick. Everyone’s happy, confidence is high, the swagger is back, the penetrative play is back and so are the urgency and pace in play. However, in truth, I felt that the final score-line was flattering to us. We struck early with a good goal all around; magnificent wing back play by captain Patrice Evra to set up his best friend, South Korean, Park Ji Sung who placed it past Omani goalkeeper Ali Al Habsi. We played well enough thereafter to warrant a second goal for ourselves as we pressed Wigan from the front in their half. Berbatov and his strike partner for the night, Javier Hernandez were finding space in the Wigan backline, Nani and Park were a menace as they roam around almost in a free role and Evra and makeshift right back, Antonio Valencia bombed forward down the left and right flanks respectively to put in crosses. We didn’t need the helping hand of Phil Dowd to help us pile on more pressure and and totally dominate proceedings to get us a second goal but we did get a little help with the harsh sending off that reduced Wigan to 10 men and in that process effectively killed the game off as a contest. In football, sometimes it goes for you and sometimes it doesn’t and these kind of things even itself out during the course of the season. Unnecessary or not, any kind of help is most welcome for us.

Prior to getting our second goal and their sending off, Wigan posed a threat whenever they went forward especially the speedy and tricky Victor Moses whenever he ran at Jonny Evans and whenever Ronnie Stam got down Wigan’s right wing to put in dangerous crosses. The defence which consisted two makeshift defenders in Michael Carrick at centre back and Valencia at right back, didn’t seem all too convincing in dealing with the crosses and gave me some concern. I was unhappy too at the starting lineup which saw the presence of two makeshift defenders. The absence of Phil Jones and Rio Ferdinand were understandable and justifiable but what happened to Chris Smalling? Am I missing something here? Can anyone enlighten me? Contrary to United’s belief, I don’t believe we have a squad quite as strong to field players in makeshift positions and get away with it. We can get away with it for one or two matches but not more than that. Clearly, the defence is a concern with the injuries we have there. Nemanja Vidic is out for the season. Fabio Da Silva is injured, his twin Rafael is fit but was left on the bench for the entire game even when there were no recognized right backs in the squad, Ferdinand needs to be handled with care and is expected back for the game against Blackburn but we can’t rely on him to start every game, Jones might still be feeling the effects of the knock he took against Fulham but should be fit to face his former club and I don’t know what happened to Smalling. Certainly now is not the time to rest defenders when we hardly have any available. Evans went off at half-time to be replaced by young Zeki Fryers. Is Evans another victim of the injury bug among United defenders?

Luckily, we came away with a win and a resounding one at that but I am pretty sure that had it been 11 v 11, defensively we would be tested more especially if the score had remained 1-0 at half time. We might have won big and I am happy for that and the fact that we are level on points with Manchester City but I am growing in concern by our injury situation in defence and I am also apprehensive against over-confidence seeping into the side now that we are playing well and scoring lots of goals. Over-confidence was the cause of our downturn in form after the scintillating start to the season and Sir Alex admitted that even if it was not in so many words. It cost us dearly as we were embarrassingly bundled out of the Champions League from a group that didn’t pose too much threat on paper. Sometimes I feel, the over confidence comes from the starting line-up selection itself as we risk getting humbled or chasing a goal late in the game to salvage a draw or win it. We are known to score late, dramatic goals which most often than not, are winners but it is not always that such a thing would happen.

Going into the New Year’s Eve match against a now buoyant Blackburn Rovers side who got a valuable and hard-earned point at Anfield against Liverpool yesterday, our biggest danger would be ourselves and it is important for us to guard against complacency and keep the current form going. I also do hope that the injury situation in defence clears up and there is nothing seriously wrong with Smalling or Evans. Having said that, out of desperation, it wouldn’t be wise to play players who aren’t 100% fit or who are rushed back from injury out of the fear of a recurrence and a longer time on the sidelines. The manager is in a dilemma now but has experience on his side to help him see through this injury crisis in defence.

Can United handle it without injured players?