If there is a player who epitomises Manchester United’s spirit in the current squad, it is Darren Fletcher. Having joined United at the age of 11, he worked tirelessly through the youth system, starring in youth teams and quickly became one of the hottest prospects in English football. 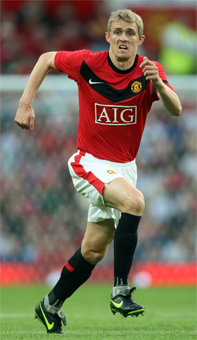 The effort the club made to accelerate Fletcher’s career was clear for all to see. A standout in Manchester United’s reserve team, many tipped him to succeed David Beckham on the right side of United’s midfield. Darren Fletcher made his long awaited debut for Manchester United in the Champions League against Basel in the 2002/03 season and after a typical Fletcher like display was replaced by one David Beckham. After several appearances it was clear that Fletcher’s future lied in the middle of the park, all he needed was a chance and boy did he take it.

He broke into the first team during the 2003/04 campaign playing a crucial role in Manchester United’s FA Cup victory. One display that sticks out in the mind of many United fans was at Villa Park in a FA Cup final where he stood his ground and took the game to a certain Patrick Viera. In a midfield that consisted of Roy Keane, Paul Scholes, Ryan Giggs and Ronaldo, it was Darren Fletcher who led Manchester United to hard fought win over the Invincible Arsenal side. At the time Darren Fletcher had divided opinion among supporters but after this display he quickly won over his doubters with his hard work, determination and a willingness to leave everything out on the pitch for his teammates.

Criticized by his captain Roy Keane for a display against Middlesborough, he once again set the record straight with a great workmanlike performance against Chelsea at Old Trafford netting the winner with a header that looped over Peter Cech and John Terry ending Chelsea’s 40 match unbeaten run in 2005.

It was during the 2006/07 season where Fletcher proved that he had more to his game than just a good engine. Scoring important goals, providing assists and filling in across the midfield he showed yet again why Sir Alex opts for him for the big occasion. Darren Fletcher was brought into the Manchester United midfield for the 2nd leg  to replace Paul Scholes who was serving a suspension from a 2-1 defeat to Roma in the 1st leg Champions League quarter final. Although the likes of Ronaldo, Carrick and Rooney grabbed the plaudits it was Fletcher’s faultless display that let the attacking power run riot in a 7-1 drubbing of the Italians on of the most famous European nights Old Trafford had witnessed.

Darren Fletcher was again predicted to move down the pecking order after the introduction of Owen Hargreaves and Anderson at the start of the 2007/08 season. Even though the Scot made fewer appearances than the previous season he was again in the midfield for some crucial matches. In what many regard as his best performance in a United shirt, he earned the man of the match award after leading United to a 4-0 thrashing of rivals Arsenal, scoring two goals with his head, again knocking the gunners crashing out of the FA Cup. Fletcher was unfortunate to be an unused substitute in Manchester United’s Champions League win over Chelsea in Moscow.

After his personal disappointment of missing out on the Champions League final, Fletcher made is public that it was his dream to represent Manchester United in a European Cup final. In what was another solid season from the fast becoming fan favourite, his dream was only minutes away from becoming a reality. With United 4 clear goals up on aggregate in the semi final of the Champions League against Arsenal, Fletcher as usual wasn’t giving an inch and late in the match tracked Cesc Fabregas into the box to put in a fabulous last ditch tackle steering the ball away from the Arsenal playmaker. Every replay shown, clearly proves Fletch won the ball but the referee saw things differently, deciding to send Fletcher off and rob him of his place of a chance to represent the club he loves so much on the greatest stage of them all. United appealed the decision but UEFA stood firm and made it clear that Fletcher would serve his ban and miss out on the final.

United travelled to Rome that year for the Champions League final against Barcelona, Manchester United were given a footballing lesson and well beaten by the best team in the world. Now no United fan believes that if Darren Fletcher had played, we would have lifted the European Cup but every United fans believes that it would have been a much different game if he had been in the midfield doing what he does best against the slick midfield of Barcelona. The United midfield could get nowhere near the likes of Xavi and Iniesta. One can only think what would have been if Fletcher was present.

Bouncing back from the disappointment of the previous season, Fletcher was again shining on the big stage scoring twice in the epic Manchester Derby at Old Trafford that saw United put City in their place with a 4-3 win. It was later this season where Fletcher took the field against the man he was tipped to replace. David Beckham came to Old Trafford with Milan only to see United running out 4-0 winners with Fletcher scoring the final goal which also happened to be his first in Europe. A touching moment for the Scot, congratulated by Beckham after the game and also earning glowing praise at full time. Fletcher missed the run home with what many thought was just a virus. He made the odd appearance but never fully regained full fitness

Fletcher has had a few appearances so far this season but with no consistent run in the side due to his lack of fitness it had prompted himself and the United medical staff to look a little deeper at the midfielders health. Darren Fletcher has now being diagnosed with the Ulcerative colitis virus, a disease of the large intestine. It is horrible news for both the club and Fletcher but the player’s health comes before anything else and this is shown by the decision to give Darren Fletcher an extended break from football. This will most likely see him miss the rest of the current campaign and most experts believe some parts of next.

Darren Fletcher has done it the hard way, coming through one of, if not the hardest youth academies in world football, breaking into a Manchester United midfield that consisted of well established internationals, constantly proving doubters wrong with great displays on the big stage and his unmatched work rate and desire for the United cause. Fletcher will be missed, all United fans will want him back fit and healthy playing in the red shirt again and we will all get behind him and try to get him through this tough time.

It has been a pleasure watching Fletcher over the years, I have been lucky enough to watch him live and if he can make a full recovery, he is my tip to become the next Manchester United captain. You only have to look at his career to see that he is Manchester United through and though.