Do we need to go into the January transfer market?

After witnessing Manchester United defeat against Blackburn Rovers for our New Year’s Eve match, I would touch on another significant matter to the football world, the opening of the transfer window. I have heard a lot of United fans voice out in blogs, newspapers and talk shows on the need for United to sign someone in January and I have been asked on my view on this topic a few times. My opinion on this matter is that I don’t believe Sir Alex Ferguson will sign anyone in January. If he does, I will be genuinely surprised now whether the surprise, is positive or negative, only time will tell. 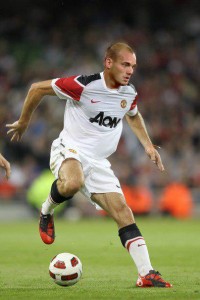 After witnessing Manchester United defeat against Blackburn Rovers for our New Year’s Eve match, I would touch on another significant matter to the football world, the opening of the transfer window. I have heard a lot of United fans voice out in blogs, newspapers and talk shows on the need for United to sign someone in January and I have been asked on my view on this topic a few times. My opinion on this matter is that I don’t believe Sir Alex Ferguson will sign anyone in January. If he does, I will be genuinely surprised now whether the surprise, is positive or negative, only time will tell.

Sir Alex has repeatedly claimed that if a player he has been eyeing becomes available, then he will surely do business. Who he has been eyeing, is open to speculation but I have my doubts on clubs willing to release a player in January unless the player himself wants to move or the club needs the money for their own purposes. The other point he makes is that whoever he signs, has to be someone world-class, someone who is better than what he already has at the club at the moment and that is a fair comment. We cannot just go and sign anyone for the sake of signing players, that has not been the United way. The manager has made some poor signings but most of the time he has got it right. Moreover, whenever a player moves mid season, most often than not, players might take some time to adjust and adapt to their new surroundings and to a new club and at the midway stage of the season, there is hardly ever any time as the club look to press on in its chase for silverware therefore it would not be such a wise idea to sign anyone in January. Henrik Larsson being an exception though in 2007.

Take a look at United’s history and you would find examples of players who arrived in January or thereabouts and taking their time to settle in and adjust to their new surroundings for example; Andy Cole in 1995, Diego Forlan in 2002, Nemanja Vidic and Patrice Evra in 2005. Another point that I commonly hear raised from the United fans is the demand for a world-class creative central midfielder. We do need one but in Tom Cleverley, we have one who can do the job, however as a youngster inconsistency is expected. To our ill-fortune after a very bright and promising start, he has been injured and in the pre-match press conference, the manager has stated that he is still no-where near full fitness. Sir Alex is right to say that he has options in the centre of midfield with Michael Carrick, Ryan Giggs, Park Ji Sung and Darron Gibson who are fit now plus promising young Frenchman, Paul Pogba. Darren Fletcher is out indefinitely, Cleverley is still injured but Anderson is returning back to full fitness. If a player is signed in this position, a world class player has to be signed of the right age. The manager has made a conscious effort to sign youngsters in recent seasons. Anders Lindegaard was the last player he signed who was 25 and above. A world class player signed would have to be someone who is reaching the peak of his career at 26 or 27.

Among the names bandied about, Wesley Sneijder and Luka Modric are the most prominent two. Inter Milan logically wouldn’t want to sell Sneijder in January. If they do fail to make it into Champions League next season, which might happen after a poor start to their season and coupled with the fact that Italy has only 3 Champions League places this season, they might need to sell their prized asset to balance the books but for that to happen, we got to wait till the summer. Modric, on the other hand, is having a great season with Tottenham Hotspurs who have hopes of winning the title or at the very least, secure a place in the Champions League. Like Inter, they wouldn’t want to sell their Croatian playmaker in January although I feel a move in the summer could be a possibility. However, we do face the threat and challenge from Chelsea for his signature. As for central midfielders who are better than the ones we already have, Xavi and Andres Iniesta are certainly not for sale. It would be one of the biggest shock in the world of football if either of them was sold now or even in the summer. I do feel that German playmaker Mesut Ozil could be a possibility or Kaka but it’s tough to see how they would fit into United’s style of play.

My concern at this point of time is in defence. Nemanja Vidic successfully underwent surgery on Wednesday and is out for the rest of the season, Rio Ferdinand is a doubt to only make the bench for today’s game, Chris Smalling is out at least until the FA Cup clash against Manchester City on the 8th of January and Jonny Evans is out for 2 weeks while Phil Jones’ chances of making the game against his former club are not certain. There are a lot of injuries in defence and on paper; the only defenders that are fit are Rafael Da Silva, Ezekiel Fryers and Patrice Evra. Rafael has hardly played this season so I doubt the manager would start him as he was on the bench for the whole of the last match too. Fryers played his first match in the senior side in the centre of the defence against Leeds United but his latter appearances have been at left back. Patrice Evra deputised at centre back against Wigan Athletic on Boxing Day but the score was already 2-0 to us at that time and he is not a natural centre-back. I shudder at the thought of the defence that would be named by Sir Alex. In 2009-10, we faced a crisis of similar nature in defence and ended with Fletcher and Carrick in centre back spots. We lost the title that season. We should learn from our past and I feel due to the injury situation, we need to sign a defender on loan or otherwise. It would be wise to sign someone aged 25 and above but to find someone of the quality of Ferdinand and Vidic is a tough ask as most players of that calibre are already at big clubs and are not up for sale. Therefore realistically, it seems that we have reached a dead end. We can get away with one or two games with makeshift defenders but not for long before we get found out.

Overall in January, I would advice my fellow United fans to have realistic expectations in this transfer window as the options are limited and the time frame is short. I do hope that the manager could surprise us all with a temporary signing in defence; Rafael Marquez maybe for 2 months. I am just dropping a name here but the manager would and should know best. Perhaps he is sceptical of signing a player like Marquez who is near the end of his career and used to playing at a slower tempo. Perhaps he is sceptical of signing a player like Marquez who akin to Laurent Blanc could make some costly errors at the back in trying to adapt to the pace in the Premiership. However do take note that the Mexican isn’t that old at 32 years of age and can speak in English therefore communication wouldn’t be a problem for him. Let us all wait and watch to see what the manager has up his sleeve now and carry on our support for the side.

Written by Editor
3 comments
Thoughts On Newcastle Match And United’s Situation
Darren Fletcher: United through and through