With the debate over Manchester United’s first-team goalkeeper raging ferociously, this author steps back and let the statistics do the talking.

Bereft of self confidence and devoid of regular football, David de Gea has been disappointingly underwhelming in his first season as Manchester United’s new numero uno. With seemingly huge boots to fill, the Spaniard’s apparent lack of concentration and slight frame meant that he was a seen as a weak link by every single opposing team, and was subjected to all sorts of physical and aerial bullying.

With de Gea shipping goals like they were going out of fashion, an alarmed Sir Alex began dropping him in favor of United’s older and more experienced Danish stopper, Anders Lindegaard. Lindegaard’s ostensible calming influence and dominance over the 6 yard area have meant that the 28 year old is slowly making that first team jersey his own.

Nevertheless, the issue has been discussed, dissected and dismantled bit by bit by pundits, flimflammers and of course, millions and millions of fans across the internet. Surprisingly, both seem to be commanding equal amounts of loyalists.

With seemingly no end in sight to the war of words (or the huge number of Scousers shouting “David de who?”/”David de Gay-a” with each subsequent fumble) it is time to put the matter to rest conclusively. People say hello to Statistics.

I’m focusing only on games played by both keepers in the English Premier League, so that frequency of games is lesser and hence data collection as well as results should be more accurate. Let us begin:

The following is some basic data and results based on the number of games played. 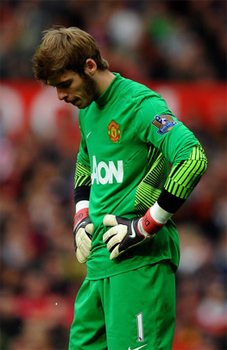 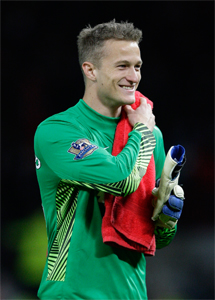 First, notice the huge number of shots that de Gea has been subject to 207 shots in 14 games. That works out to about 15 shots per game. In Lindegaard’s case, the

Dane has faced 70 shots in 6 games, which work out to roughly 12 shots per match.

Considering the virtual barrage of shots that de Gea had to put up with, he saves a pretty decent 78% all shots on target. Now take a look at the Dane’s stats. With 17 saves from 19, Lindegaard has an outstanding save to shot percentage of almost 90%. Only Tim Krul has a better record in the entire Premier League. Lindegaard has also managed to keep the same amount of clean sheets as de Gea, albeit in just less than half the amount of matches. That is, 5 clean sheets in 5 games. I don’t know about you, but to me that is just class.

Again, consider the last statistic. De Gea has, so far, conceded a less than impressive 17 goals in 14 games, at slightly over a goal a game. This is once again in contrast to Lindegaard, who has conceded just 3 goals in all his outings (all of which came against Newcastle) at a staggering 0.50 goals per game. This virtually means he concedes one goal every two games. Commendable. (Although as the season continues and Lindegaard gets more games, I assume the goals per game ratio will even out.)

Regarding what we seem to have seen so far, Lindegaard seems to be having a clear advantage. He saves a greater percentage of shots and concedes fewer goals per game as well. Easy outcome then? Not really. Let’s dig a bit deeper and see where that takes us.

Let us break down separately, how both goalkeepers prefer to save incoming shots:

It is rather astonishing to note that despite the marked differences in the way we perceive the two, they are rather similar. In fact, the only *significant* point of difference I could notice was concerning the amount of saves parried by the two.

Statistics show that de Gea prefers to parry the ball almost 10% more than Lindegaard. Why should this be the case? Possibly, it is because de Gea is still getting used to the frenetic pace of the game, and hence is often unsure of himself.

At the moment, he does not believe enough in himself to dominate the penalty box and “come and get it” as the expression goes.

Lindegaard, arguably the more experienced of the two has both the ability and the fortitude to boss around in the 6 yard box. Ergo, he prefers catching to parrying, as can be gathered.

Again, everything points in the Dane’s favor. I can almost hear you say “Yeah so he’s better in all aspects..He should be first choice.” Erm..not quite.

You see, the key factor is that Lindegaard’s clean sheets all came against weaker teams – Norwich, Sunderland, Villa, Fulham, Wigan – and he conceded 3 against arguably the toughest team he has faced so far – Newcastle (due to a defending horror show).

de Gea, meanwhile has clearly conceded more goals. But when you look at the games in which he HAS managed to keep clean sheets – Tottenham, Bolton, Everton, Swansea and QPR – they are all far far tougher fixtures than Lindegaard has faced so far. And during tight games in which United scraped through, de Gea’s reflexes seem to have massively influenced the results.

Against Everton for instance, the Toffees managed a staggering 17 shots in total, with 8 on target. de Gea managed to withstand all of them. And in retrospect, it was a nasty and tough game for a United side scarred by the wounds of the derby day massacre, a game in which United were pushed hard until the very last call of the referee’s whistle.

Another rather interesting fact is this – Against Norwich, Sunderland, Villa, Fulham and Wigan, Lindegaard faced a sum total of just 14 shots on target. All of which he managed to keep out, thankfully. Now comes the fun part. Against Spurs, Bolton, Everton, Swansea and QPR, de Gea had to stand up to 39 shots at goal. 39. That is a huge difference for two separate 5 match sequences. And the young Spaniard kept out every last one of them.

Another amusing fact is that the in the only game Lindegaard had to face more than four shots on target, he managed to somehow let in 3 (At St. James’s Park). This is in stark contrast to de Gea who had to put up with 5 or more shots on goal against Tottenham, Arsenal, Bolton, Chelsea, Manchester City, Everton, Wolves and Blackburn.

Take a guess as to how many goals he let in, excluding the game at City. No, you’re wrong. He let in just 9.

9 goals in 7 games against arguably the toughest sides in the EPL. That is by no means poor. It is an admirable statistic, especially for someone so young.

It isn’t all Lindegaard now, is it?

Finally, to ram the point home, I take one final example.

Newcastle United is the only team in the EPL that United have already faced twice this season. Since both de Gea and Lindegaard have played against them, let us compare the facts of both the matches. (However I should say that Vidic wasn’t playing when Lindegaard was in goal, and that might have affected the result to some extent).

Here too, de Gea narrowly wins out. He has a higher save percentage than

Lindegaard and the only goal he conceded was a penalty, which shouldn’t have been given in the first place. Lindegaard meanwhile, comes pretty close but just loses out in the end. Against almost much the same Newcastle side that de Gea faced, Lindegaard managed to allow in three goals, the last of which he was partially at fault for.

But the fact of the matter is, in the only game de Gea and Lindegaard can be compared directly head to head, the Spaniard seems to edge out the Dane in almost all respect. Now that is saying something.

AND THE WINNER IS…?! 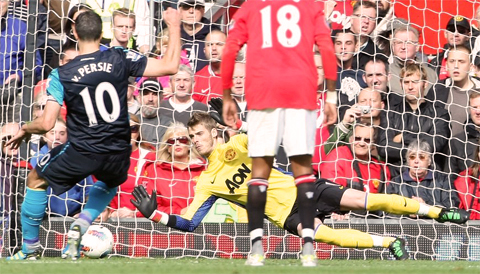 After what has been a very closely fought match, I declare David de Gea as the winner and rightful owner to Edwin van der Sar’s jersey. Barely though, barely.

For all his nervousness and apparent lack of self confidence, the Spaniard has almost single handedly saved our skins in lots of tough matches. Granted he tends to make the odd mistake or two and has sudden lapses in concentration, but you forget the fact that he is just a kid. All he needs is some backing, bulking up and regular football and he’ll be having Sir Alex eating out of his hands.

Against Liverpool and Chelsea especially, de Gea was one of the main reasons we didn’t stumble during early season. During tough matches at Swansea and Everton, his pure instinct helped us scrape through and sneak out another 3 points.

I have no doubts in my mind though, that Lindegaard is the calmer, more composed and more experienced of the two. He also has excellent communication skills as well, being fluent in English. Sadly though, I just don’t think he should be given the first preference. He clearly does not have de Gea’s talent or reactions and against City in the FA Cup and at Newcastle, he looked a shadow of himself. He was erratic, nervous and his distribution was poor. It just served to emphasize my belief about him.

At 28, he is fast approaching the peak of his career and therefore, needs to make the most of all the opportunities he is being given. Sadly enough, he isn’t. How much more magnanimous can Sir Alex be? Lindegaard needs to step up to the plate soon enough, if he’s hoping to emulate the original Great Dane.

As for de Gea, all he needs to do is calm down and carry on and I’m fairly sure he’ll end up at football’s very own Valhalla.