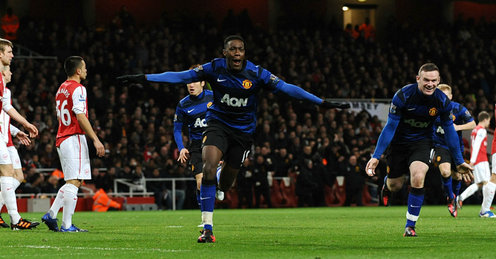 Sir Alex Ferguson proved why he is the best manager ever in the Premier League and earth after beating Arsenal 2-1 in their home at Emirates Stadium. United knew they needed a win to keep chasing leaders Man City and they looked on course for victory when Antonio Valencia nodded home Ryan Giggs’ cross. Arsenal leveled in the second half through Robin van Persie, but their hopes of a point were blown nine minutes from the end when Danny Welbeck steered Valencia’s cross home from close range. Poor Arsenal lost their third game in row while United raise their away victories to eight and close the gap again with neighbors City.

United fans wish Jones and Nani injuries are not serious as this period of the season can’t stand any new injury.