The Cleverley and Anderson partnership

If you ask Man United fans about Cleverley and Anderson partnership, they will be fond of the type of football we played with those two in midfield. However, they’ll also tell you how open we were. I’ve seen a good number citing how we leave too many gaps and won’t work until they strengthen their defensive positioning. These points are fair and good observations. However, I think there’s more to the issue than Ando and Tom and here’s why… 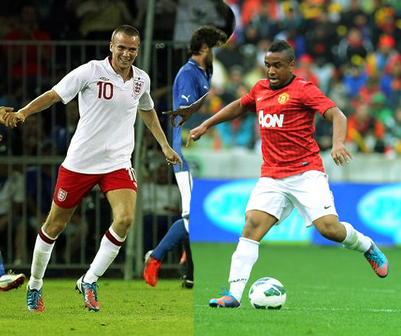 If you ask Man United fans about Cleverley and Anderson partnership, they will be fond of the type of football we played with those two in midfield. However, they’ll also tell you how open we were. I’ve seen a good number citing how we leave too many gaps and won’t work until they strengthen their defensive positioning. These points are fair and good observations. However, I think there’s more to the issue than Ando and Tom and here’s why…

As we’ve seen at the beginning of last season, Tom and Anderson offer a platform for quick interplay and swashbuckling football. It seemed as if Fergie was implementing a new style in the team and I imagine everyone was excited about it. However, as other posters have mentioned, with this partnership, we conceded numerous chances. Many express the notion it is down to Anderson and Cleverley not being positionally disciplined enough, getting caught upfield and being bypassed too easily. While these points are applicable, I feel we aren’t seeing the whole picture.

Personally, I thought Fergie’s claim on playing the youth was not only to show our new style of attacking play but a change to our defensive setup. Unfortunately, this didn’t pan out which I think is a major reason why the Ando-Cleverley partnership didn’t work. I’m not sure how many observed this in our opening games, but our defensive line pushed up more than usual. There were moments where the team executed a high press. In those moments, we were able to win the ball back in our opponents’ half and sometimes close to the halfway line. This allowed us to maintain pressure on the opponent and be more dangerous on the attack as our opponents weren’t able to settle into defensive positions so easily.

There is a problem though. These were only moments and more often than not our defensive line stayed back while our attackers and midfield pushed up. This was especially the case against Tottenham. I believe they were playing 5 in midfield and it allowed Van der Vaart to occupy the space between our midfield and defensive lines. What exacerbated the problem was whenever we lost the ball high up the field, there was already a large gap for Tottenham’s midfielders to run into and we were left very open to the counterattack. It made the game end-to-end and fun to watch. Nonetheless, it was worrying the amount of shots we were conceding. Although, some of these shots were potshots as Van der Vaart kept spanking the ball towards De Gea. We can thank the English media for that! We must also remember we had Phill Jones as center back. While he offered some great last-ditch tackles, blocks, and attacking play, his poor positioning and lack of discipline forced him to make such decisions.

So basically, the issue is two-fold. Rio and Vidic would exacerbate the problem even further as they can no longer rely on their pace to recover from making an error, especially if they’re pushed up. If they did push up, we’d be liable to conceding goals like Chelsea when Arsenal came to Stamford Bridge this past season. By staying back, the gap between our midfield is still there, therefore the need for Carrick to play as holding mid/deep-lying playmaker hybrid.

The solution:
So is it possible for such a partnership to work? I definitely think so. However, it would require 3 things:

1. Defending from the front
2. Defending with the ball
3. Higher defensive line

This is my ideal line-up for such a partnership: 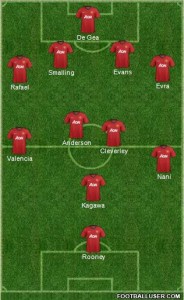 (Note: slight error with backline. Meant them to be higher up)

While this could work, it’s not something I could see happening any time soon (this season). Executing those 3 points above efficiently is not a trivial task for any team to do. It seems like it’s what Sir Alex hopes to do in the future but I don’t see it occurring this season for several reasons. First, it requires a lot of training, repetition, and discipline in order to implement such a system effectively. The last time we were able to imbue such a disciplined performance in the team was in the 2008 semi against Barcelona. If you’ve never re-watched the match, I strongly suggest you do because it offers a lot of tactical insight and epitomizes Quieroz’s handiwork as well as the team’s execution of it (what a night!). Secondly, the team simply hasn’t had enough time together to implement such a system due to injuries and other factors. Additionally, at this moment in time, we do not press well enough as a team and when we do decide to press, it’s not consistent enough nor as thorough as we need it to be. Plus, as others have mentioned, Tom and Ando need to be more tactically disciplined.

Nonetheless, this is the solution I have and I do think it’s something we could definitely move towards. I actually think this is why Sir Alex wants to inject more pace into the team. Then once we get the ethos down, teams will have trouble dealing our pressure. While I do see this line-up system possibly being used this season, I hope Fergie doesn’t try and use it too much. We’re not ready for it yet but it is the way forward. We’re okay with using Carrick for now. However, if Carrick does get injured, this might be an unpleasant option we have to take.

How do you see this partnership?

Written by Editor
3 comments
IN FERGIE WE WILL ALWAYS TRUST!!!
Luis Nani to Real Madrid!?