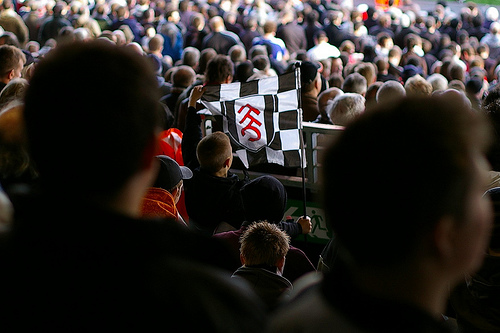 We’ve been in touch with a fan site asking them questions ahead of this weekend’s game. This time Fulham are going to visit Manchester United at Old Trafford and we’ve been speaking to William Paul from HammyEnd.com to see what his prediction is and what they think about both Man United and their own club Fulham FC:

Who do you think are Fulham’s key men this season?

For me it is a holy trio of 3- Brede Hangeland, Mahamadou Diarra and Bryan Ruiz. Hangeland leads a strong defence through example, and a good defence can do wonders in the premiership, boosting you up the table whilst you might not score as many goals as other sides. So for that he is key due to the fact that when he performs well, we do well.

Mahamadou Diarra is a midfield enforcer, who breaks up the play, whilst retaining good passing skills. He, again, is the main cog in our midfield- he works extremely hard, and helps us to retain and distribute possession, which is key for our formation,so that labels him a key man in my eyes. He then directly links with Bryan Ruiz, who sits just behind the striker and plays an attacking playmaker role. Much slated last season, he’s really bulked up and looked fantastic to Norwich, with most of the attacks coming through him, so he finishes off the key holy trio.

Who is the unsung hero or rising star we may not have heard about in Fulham’s camp?

We have a number of rising stars including Marcello Trotta and Kerim Frei (who you will hear about in the next few years) but I’m tipping Alex kacaniklic (or Kaka as we call him) for a big season. He’s a left sided midfielder who’s 20 and was part of the world greatest transfer (Paul Konchesky to Liverpool for 3 million+Kaka and Lauri Dalle Valle). He is quick and puts in a fantastic cross, and you may have seen him score his first goal against Norwich last Saturday, in what was a dominating performance from him. He is the big thing this season for us.

Were you satisfied with Martin Jol new signings during summer?

This is a topic that is causing much divide in the Fulham camp. I think that I would be better suited to answer this after the transfer window closes! But If had to make a decision based soley on players we have got, not what we haven’t, then I would have to say Yes I am. Mladen Petric is a fantastic player, much revered in Hamburg, and has a cracking left foot. He looked extremely good in his debut and I’m excited. Our other Bundesliga signing, Sascha Riether, also looked a very good player, an attacking RB who can put in a cross as well as defend well. I’m a big fan of Hugo Rodallega, he scored over 10 in 2 seasons in a very average Wigan side, so I’m excited to see what his pace can do to our frontline. More signings needed, but happy so far.

Do you think Fulham can finish in better position at the end of this season?

The top 7 is a hard hard place to break into, and I don’t think we have the squad depth to do it right now. Solid top 10 with a good squad, but much hinges on our transfer activity for the rest of the window, and losing key players in January could hurt hard. So no, I can only see a repeat of last season at the moment.

Which Man United player(s) do you think are going to cause Fulham big headache this Saturday?

I was praying that the RVP transfer would drag out, so he didn’t have to make his home debut vs us! That said, he didn’t score agaisnt us last season. If truth be told, I’m a huge admirer of Antonio Valencia. In the top 5 wingers in the prem for my money. He’s quick and puts in a wicked cross- so he’s on my list. David De Gea has been improving massively, and he will be hard to beat, so we’re gonna have a hard time on Saturday. I’m most scared of Wayne Rooney, who I think is just a fantastic player- his ability to change a game in seconds is scary. His goal vs City is still one of my favorite ever. I’m hoping he has some early season blues!

If you could have any United player on your team, who would it be and why?

I’m going to divide this section into reality buy and fantasy buy. My reality buy would be Berbatov- he’s fallen out of face at United in recent seasons, but his sheer ability is saliavating, not to mention him oozing class. Finishing not to shabby either!

In my fantasy section, it would have to be Valencia. I just love him! He’s a real all round winger, and someone who I feel would slot in perfectly in our attacking formation.

What is your perception of United? How do you think we will do this season?

I live in London and so have first hand experience of lots of “United” “Fans”. I’m not going to slate you, as I like you, but some of them are really painful. I daresay real Mancunians are a little more down to earth than these fans and so I’m going to ignore my usual view on them.

I think your a big European club, who have brought well this window, but not in the right positions enough. I do however, think that your ownership is some of the worse in the league (and I think you will agree with me!). I think you’ll come second or third, simply because you lack the depth in defence and the RVP-Rooney could take a little while to spark. Fergie has a knack for the old shocker however, so i’ll tip you for the FA Cup and a run in europe.

We never do well at Old Trafford (or in any away game!) and I’m still going to back you for a win, but only a small one goal win. I reckon with your defensive troubles we can grab a goal, but I can’t see us holding out agaisnt Kagawa/Rooney/RVP away from home.
United 2-1 Fulham

What is your prediction of Tomorrow game lads?!

2 thoughts on “United x Fulham: Q&A with a fan from Craven Cottage”