With the Barclay’s Premiership season 2012 /13 a mere 3 games completed in most teams calendar, of the grueling 38 match campaign. It’s worth having a look at the runner’s and riders in the race at thisearly stage for the prestigious Golden Boot award:

1. Sergio Aguero. Clearly a strong contender having registered 23 goals in just 34 games last season for Manchester City , which was his first season for the Citizens .The quality of David Silva and man – mountain Yaya Toure will create and provide a host of assists for Kun .The Argentine still only 24 a fans favorite of the loyal Etihad faithful. Whom have this strange trait of turning their backs on their team, during a match. Poznan you say! Aguero likely to be right at the top of the table come the season end, should he stay injury free. 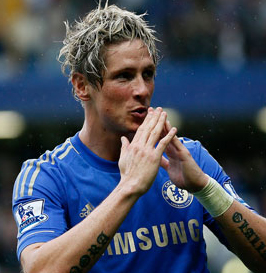 2. Fernando Torres. Season 2011/12 was one to forget for the ex Liverpool £50 million purchase in the Premiership for Chelsea. However winning a Euro’s 2012 medal with Spain and Golden Boot winner of the tournament, an FA cup medal and prized Champions league gong with Chelsea. A more than fantastic haul for the misfiring misfit under the shadow of Didier Drogba. With Drogba now plying his trade meantime in the Far East, is it time for Torres to reignite his career as one of the most lethal hit-men in the Premiership. As he had while in his golden period at Liverpool, players to find him with incisive cutting pass. His fellow countryman in his second season at the Blue’s Juan Mata and Belgium wonder boy Eden Hazard to provide the assists. A dangerous cocktail of quality, that may well come to the party. I don’t expect Hazard to telegraph his veiled cunning passes. Although he will no doubt keeps us up to date, via Twitter. 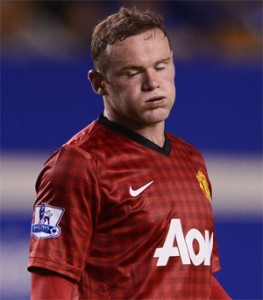 3. Wayne Rooney. Scoring 27 goals in a mere 34 appearances finishing second to the ex Arsenal talisman Robin van Persie. Having previously been charged as the designated penalty and free kick taker, it’s unclear with Rooney’s current absence due to injury if he will continue with these tasks, with the Dutchman on board. Who appears on his two outings to have taken up these duties .Which naturally will reduce Rooney’s total goal haul, come the season end. Rooney needs to come back up to speed to rediscover the form of his early United career. Hit the ground running, and blitz a purple patch immediately to get off the mark with a goal. The signing of the fabulous Shinji Kagawa will along with the Manchester United midfield creativity will always create chances. Manchester United need a Rooney firing on all cylinders, quickly.

4. Mario Balotelli. Okay I hear you say,” That’s nuts why would mad Mario be in a potential Golden Boot list “.He’s a long shot no doubt, but after an excellent Euro 2012 with Italy. Balotelli ultimately showed he does have maverick talent. If, yes it’s a big IF, he can carry this form back to the Premiership, retain his head concentrates on his job as a professional football player he could net a sackful of goals. Roberto Mancini is clearly persevering with the tempera’mental ‘ Italian so while it’s a spurious inclusion in the possibilities for the boot. Not to be discounted at this early stage of his Manchester City career as he continues to entertain us all.

5. Luis Suarez. The Uruguayans 11 goals in 31 league appearances for Liverpool was a poor return, which without a crossbar or goal -posts would have been significantly higher. Rules are rules however. For a player who once had a total goal tally at Ajax of 49 in 48 games he has hit many a low spot in his Liverpool career to date. Brendan Rodgers will be expecting as will the Anfield faithful for Suarez to step up to the plate. With the ex Swansea manager shipping out on loan the £35 million dud Andy Carroll to West Ham for a years sabbatical in east London . It’s time surely for Suarez to put behind him controversy and the profligacy which has plagued his Mersey-side spell. With Steven Gerrard in the twilight of his career to provide the ammunition, slavish support for Suarez, he will not disappoint in his attempt to get the Boot for from Liverpool.

6. Papiss Cisse. There are bargains to be captured in the January transfer window as Newcastle’s capture of the fabulous Senegalese international confirms. Scoring 13 goals in a 14 league games for the Toon and Bagging a whole variety of goals, simple tap In’s incredible volleys, long distant howitzers that were simply unstoppable, with either peg. In tandem with the almost free transfer from West Ham , yes it was the East London outfit that dumped Demba Ba , a sure fire duo to strike fear into any defense . Can Cisse repeat his baptism at the Sports Direct Arena? Com, why not as Mike Ashley has in his self, batted of any predators picking off the stars that Alan Pardew is slowly assembling. Cisse is an outside bet to get the Boot, this forthcoming season. 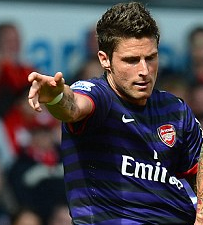 7. Olivier Giroud. Arsenal’s latest Frenchman hired to fill the vacuum left by Robin van Persie last season’s outright Golden Boot winner in hitting the onion sack 30 times featuring in all of the Gunner’s 38 league games. The ex Montpelier star led the Ligue 1 side to their first ever title bagging 21 goals in 36 matches for the understated French outfit. In conjunction with the recruitment of Lukas Podolski from Cologne who netted in 29 appearances for the Bundesliga side 18 times. Is the void left by Van Persie too much pressure for the German and Frenchman to deal with in a league they have no experience of? Particularly with the influential Alex Song allowed to depart the Emirates, and in so lose a goal assist provider, metal in the midfield. It could well be an outsider sneaking in the back-door as Giroud and Podolski are to win the coveted Golden Boot.

But as ever Arsenal balance the financial books firstly , fair-play in addition to the strikers purchased they have added quality in midfield Santi Cazorla with combined investment in the three players £44 million. However a net spend with sales deducted of 300 thousand . Probably not enough for either of the Gunners to win the Boot or a cup! 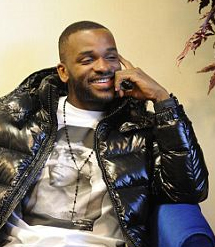 8. Darren Bent: After the ridiculous departure from wear- side while under the care of ex Manchester United legend Steve Bruce at Sunderland. Bents injuries crippled his time at Birmingham under the attack minded tutelage of Alex McLeish. Who almost relegated a great club that is Aston Villa .Can Paul Lambert revitalize Aston Villa and Darren Bent to get back to scoring ways as clinical as he is, to drive the midlands club up the table .At this stage of the season it’s not looking on track for Villa. Darren Bent to get his club career back together or his depleted England International career under the current charge Roy Hodgson. The saying be careful what you wish for springs to mind Darren Bent, fancy a run out at Sunderland again under Martin O’Neil? Bent a low outsider for the Boot while Randy Lerner takes grasping charge of the purse strings at Villa Park. No drive from the heart of the team with love nor care.

Who do you think will win the coveted Golden Boot trophy this season?