Cross roads for Rooney, a puzzle for United?! 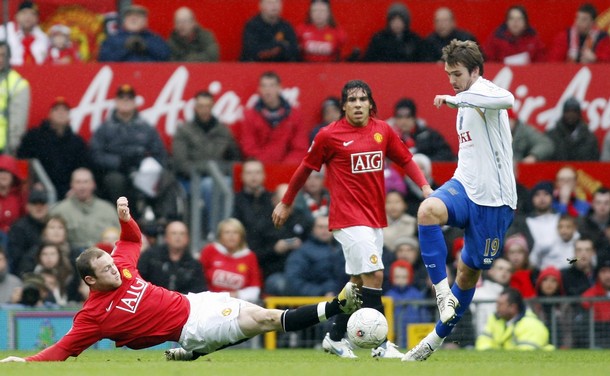 In Rooney’s new book, My Decade in the Premier League he says ” Once I feel I haven’t got the sharpness needed to get away from defenders , I’ll probably drop back into midfield for a couple of seasons .”

He also said after United against Newcastle: “I was involved in the game, the whole game. I’m not one who won’t put the work in and I will do my best for the team. That’s all I can do.”

Are we in fact not now witnessing Rooney operating in that very role? As a midfield play-maker lying deeper, operating from the centre circle to link up play from the rearguard to the attackers, Robin van Persie and Wayne Rooney with a combined Premier league haul last season of 57 goals it should be a nailed on certainty for both strikers to produce. More often than not Rooney drops deep in search of the ball, while Van Persie performs and contributes more when operating as the spear – head attacker.

The chemistry and formation at United has altered radically no longer adopting slavishly a 4 – 4 – 2 system now with flexibility to play in a 4 – 2 – 3 – 1. Where does Wayne Rooney fit into this formation if Robin van Persie continues his excellent goal scoring return at Manchester United, Arsenal last season? Shinji Kagawa will most certainly play behind Van Persie as he did to telling effect at Borrusia Dortmund, and provide goal threat, assists.

Nani or Ashley Young on the left flank with Antonio Valencia on the right wing for the majority of key games, If the Kagawa – Van Persie partnership bares fruit as it blossoms to fruition, Rooney may well have to shift out to the left wing providing more competition for Nani, Young and Danny Welbeck on the left where Welbeck is ineffective.
To add to the conundrum of Wayne Rooney’s likely future starting position Manchester United surely have an over abundance of the spear – head attackers, with Van Persie, Rooney, Welbeck, Hernandez, Macheda and young Will Keane who likely would have had a breakthrough season to the first team on a regular basis but for his injury. Something has to give in this scenario and a player or two sold. As I wrote in the article on Manchester United’s midfield weakness on Truly Reds, there is a glaring imbalance in options not as you can see in attacking players choice, but a world class quality defensive midfield. However Manchester United are linked again to Robert Lewandowski the excellent Bundesliga front – man behind Manchester United’s Shinji Kagawa, from Borussia Dortmund?

The quandary for the manager should be who will be sold or loaned in this January’s transfer window, while spurious links have been raised regarding Javier Hernandez to Real Madrid they can’t be discounted as a possible destination for the Mexican. To free up wage resources on a player who scored 10 goals in his second season ‘ syndrome’ at Manchester United. The funds on any transfer fee generated hopefully directed to add steel, grit and muscle to protect the back four defence line. A player of the mould similar to Newcastle’s Cheick Tiote would fit the bill. Tiote received 11 yellow cards last season and has now featured in the referees’ book 25 times in 50 games. Not what you would describe as a Michael Carrick, Rolls Royce class footballer. Tiote will take the game by the scruff of the neck, strangle attacks. Thou shall not pass!

When it became clear in the summer transfer window that indeed Manchester United were ‘ serious ‘ in signing the world class striker Van Persie and it was not the media creating disharmony at Manchester United. Wayne Rooney was linked to the seriously wealthy Paris St Germain as having an interest in United’s No 10. No came the reply from various sources and mediums, Rooney himself via Twitter pouring scorn on the rumor supported by Manchester United, Chief Executive David Gill.

There is normally not fire without smoke, initially. Yet who has added to the fuel? The Toxteth boy wonder does himself no favors with his off – field shenanigans or on camera out bursts. Nor Manchester United.
This is not ideal for Manchester United’s fourth highest top goal scorer in the clubs history. Rooney has a big season ahead of him, certainly not make or break but his career has stalled from the youth who broke onto the scene in 2002 for Everton at the age of 16. Rooney can no longer be guaranteed a starting berth and has a lot to prove to Sir Alex Ferguson since the contract dispute in 2010 where he was rewarded with a generous contract which retains his services at Manchester United till 2015.

A brief look at Wayne Rooney’s career to date;

Nets against Arsenal the winner, Arsene Wenger lauds him as “Biggest talent I’ve seen since I arrived in England “.

2002 : Displays petulance to follow him through his career , by receiving a red card following a rash challenge on Birmingham’s Steve Vickers a mere 10 minutes after being on as a substitute .

2003 : Rooney debuts for the England national team the youngest ever player aged 17.

2004 : Rooney rejects a new Everton contract . The 18 year old having scored 17 goals in 77 games for the Toffee’s signs for Manchester United. A fee of over £ 25 .0 million secures his signature, the highest transfer cost ever then for a player under 20 years old.

2004 : Scores a hat – trick on his debut for Manchester United against Fenerbahce in a 6 -2 win in the Champions League.

2006: Suffers an injury for the second time in his career with a broken bone in his foot during a 3 – 0 defeat at the hands of Chelsea. United title challenge is over.

2010 : Spectacular performance registering 34 goals in all tournaments . Rooney also collects the Football Writer’s, plus PFA player of the year award.

2010 : Criticizes English fans for ‘ booing ‘ on camera after England were out classed by Germany in the World Cup in South Africa.

2011: Scores the winner in the Manchester derby. An overhead kick voted the best ever Premier League goal.

2011 : Registers a 100th league goal for Manchester United while scoring a hat – trick against West Ham away .

2011 : More petulance swearing into a camera after scoring a goal. Awarded a suspension by the Football Association.

2011 : Barcelona outclass Manchester United for the second time in three years at Wembley . Rooney scores in the 3-1 loss.

2011 : Sent off after a petulant kick during England game against Montenegro in the 2012 Euro qualifying group stages . Rooney misses the first two games in the Euro 2012 finals in Poland and the Ukraine.

2012 : Notches up his 350th game for Manchester United , 500th senior game at home to Liverpool. Returns a single season best ever goal tally of 35 goals in all competitions.

2012 : Rooney becomes the fourth highest ever goal scorer at Manchester United over taking George Best and Dennis Violett. Ahead of Rooney are Sir Bobby Charlton, Denis Law and Jack Rowley in the top goal scorers table.

2012 : Moves to eighth in the all time England national team goal scorers with 29 after netting the winner in the game against Ukraine in the Euro finals.

Allowing Rooney time to surpass Sir Bobby Charlton’s record achievement of 49 goals for the Three Lions . Rooney is now one goal adrift of Nat Lofthouse, Alan Shearer and Tom Finney in the all time goal scoring chart for England.

2012 : Benched for the game against Fulham , preferred choice Robin van Persie starts .Rooney comes on as a sub , he suffers a thigh wound .Sidelined and out of action for the month of September.

How do Manchester United fit in Wayne Rooney going forward?