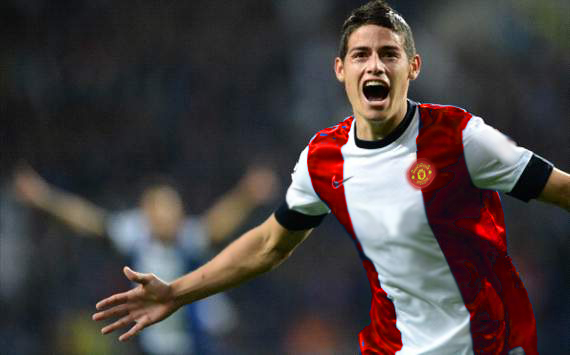 Sources in Portugal newspaper, Abola are suggesting Manchester United are in the process of preparing an offer for FC Porto winger James Rodriguez. The highly valued 21 year old Colombian is allegedly top of Manchester United’s targets.

Rodriguez operates primarily as a left winger, with the versatility to play in the secondary positions of attacking midfield and also the right wing. Rodriguez who is contracted at FC Porto till 30/06/ 2016 will not be sold on the cheap .With a current minimum market value in the region of £16 million. However there are reports suggest FC Porto have slapped a 45 million Euro’s buy-out clause on the much coveted Colombian.

Porto in the summer transfer window sold one of their brightest talents, Hulk to Zenit St Petersburg but will insist that Manchester United also pay a premium price for Rodriguez.

There is speculation that Javier Hernandez may be used as a make weight in the deal with the Mexican now falling behind Wayne Rooney, Robin van Persie and Danny Welbeck in the quest to be the No 1 striker. Nani may also be brought into the equation as he comes under severe criticism from some quarters for his inconsistency and failing to reach his potential at Manchester United.

A return home for Nani as he stalls to reach an agreement with Manchester United to extend his contract beyond 2014 is also a possibility for the Portuguese player to be used partially to finance the transfer of Rodriguez from FC Porto.

James Rodriguez has scored 5 goals in all competitions this season, including a cracker in the Champions League group stages against Paris St Germain. Rodriguez also completed the full 90 minutes for Colombia on Friday in their 2 – 0 win over Paraguay.

The question that needs to be asked, do Manchester United have a pressing requirement for more attacking players. Particularly left sided players however it could well be the writing on the wall for Nani, if this is the case.

Without wishing to pour scorn onto the likely hood of Manchester United signing the talented Rodriguez do United normally buy players in the January transfer window?

If they are highly prized by other football clubs along with Manchester United, they are generally plying their trade also in the Champions League competition, which negates in most cases a January transfer as they are ineligible to play again in the tournament elsewhere. Indeed Rodriguez is top of group A with FC Porto in the Champions League competition. The Portuguese team having recorded two wins out of two, with as previously noted a very handsome win in Paris.

Is this just spurious ‘ media talk ‘ to create interest in a player by his agent on the cusp of being world class, to drum up recognition for Rodriguez. I probably like you, am highly skeptical of transfer links to Manchester United, as there are numerous, from the ridiculous to the vaguely possible.

Very few naturally with the hundreds of players associated to be transferring to Old Trafford reach signing a contract. I firmly believe United do not telegraph ( no pun intended ) proposed transfer targets as this clearly drives upwards the likely cost , invariably resulting in an auction .

They were purchased completely of the radar as these multi million pound deals, take time in private negotiations. Not played out in the public domain, in the vein of low budget soap – opera.

Without meaning to be malicious two recent high profile January window transfer’s that did not have the benefit of a pre – season at their respective new football clubs to enable them to integrate , acclimatize with their new team – mates , and ethos of the club.

Fernando Torres transferred from Liverpool to Chelsea in January 2011 for a record breaking internal British transfer fee of £ 50 million. Good business by which club? Andy Carroll transferred from Newcastle United to Liverpool in a panic stations knee jerk signing for £ 35 million on the last day of the January 2011 transfer window. Good business by which club?

Manchester United have with the summer signing of Robin van Persie added the ammunition in combination with Wayne Rooney to put fear into all defences in Europe.

Do Manchester United need to further strengthen in attack or bolster up the rear – guard to provide protection in front of a stable back four?

None of us United supporters have crystal balls I believe but “all the balls are up in the air” and your view as to who Manchester United need to sign in January 2013 or the summer transfer lottery window?

1 thought on “Why Manchester United will not sign James Rodriguez in January?!”