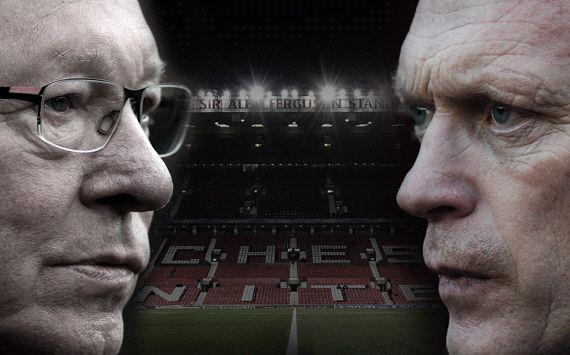 Many Manchester United fans were left feeling somewhat underwhelmed when news filtered through that David Moyes was favorite to replace Sir Alex Ferguson. Ever since rumors began about the departure of Sir Alex the big names in football management were being thrown around from Jose Mourinho, Jurgen Klopp and Pep Guardiola, Any of which would certainly have flirted with the thought of joining the red devils.
Manchester United fans would certainly not want anybody that is not of the same stature (If possible) as Sir Alex Ferguson or capable of producing the same stability and success as him. This was a conundrum. Whilst the likes of Jose Mourinho would certainly bring success he would not bring longevity, one of the factors that makes Manchester United one of the best clubs in the world.

Step in David Moyes. After being confirmed as the new United boss, fans of the club were supportive but doubting his abilities at the top level, questioning his European experience which is warranted as they want the best for their beloved club. Although It is true that David Moyes has small experience on the European scene he certainly makes up for in the Premier League. Moyes has being dealt with very little resources at Everton for many years but still was able to build teams that were able to challenge the ‘big boys’ of the league such as Manchester United, rivals Manchester City, Chelsea and Arsenal.

Moyes also has a similar ethos to Sir Alex in terms of how a club should be run and is keen on producing English youth players whilst also managing experienced players. Jose Mourinho a favourite with most United fans would want to imprint his own style on the club whereas Moyes changing nothing. With Sir Alex Ferguson taking an ambassadorial role at the club if there was any queries David Moyes has, he would certainly go to Ferguson for advice….this is unlikely to have been the case by Mourinho.

To conclude, David Moyes is in my opinion the perfect appointment for Manchester United changing nothing and continuing the legacy that Sir Alex has left.

Tell us your view of Moyes’s appointment as our new manager.

You Also can read:

Our old writer Frank Scicluna predicted from 2010 that Moyes will be United new manager!

3 thoughts on “David Moyes – The Next Chapter of success”