Have Manchester United Not Been Tested Yet?

Gary Neville seems to think so. The ex-Manchester United defender and captain gave his thoughts in a recent interview to Manutd.com.

“It’s going to be tough for United to get into the Champions League and that would be a big achievement. At this moment in time, we’re in the places in fourth spot but we’ll find out where we’re at in the next few weeks.

We’ve not really played anybody really strong yet. I know Everton at home could be classed as being a tough game but, in terms of really tough matches, Chelsea and City will provide a real measure of where this team is at.”

While Neville has a point about these big matches, is it really as simple as he’s making it out to be? If upcoming matches against Chelsea and City are a real measure of where the team is at what were the previous matches? Dress rehearsals?

One of the clichés associated with the English Premier League is “there are no easy games” even though we all know that’s not really true. Yet if we choose to use this cliché then it begs the question what exactly Neville is speaking to. Because if there are no easy games in the league then essentially every game is a test or some measure of the team.

Since, United did win at least one title during this time span, there is some overlap between the two pictures. 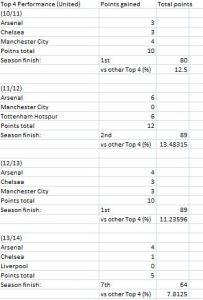 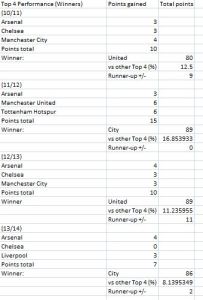 In the age of infographics, viewing numbers on a sheet can sometimes make it more difficult to visualize comparisons. To help better visualize the data, below is a graph which displays the total number of points won by the Premier League winner , the % contribution to the overall points total based on performance against the teams in the top 4, and the point differential between the Premier League winner and runner-up.

The graph shows a level of variability between the 4 seasons, especially in 2011/12 season where it went to the final day and the final seconds of the season to be decided. 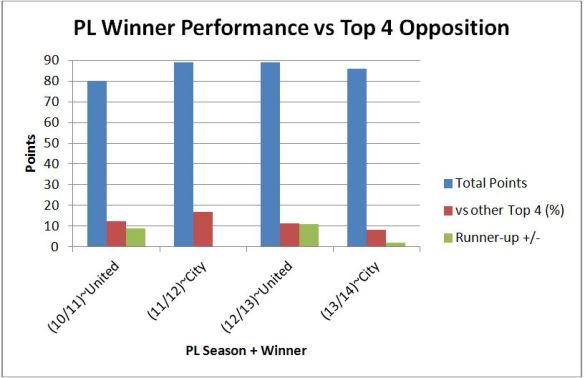 Looking at the following 12/13 season, it gets even more interesting as Manchester United achieved the same points total as the previous season (89pts in 11/12) , performed marginally worse against other teams in the top 4 (10 points compared to 12 in 11/12) and obtained a highly positive point differential against the runner-up (+11).

But wait! It gets even more interesting in the 13/14 season. City won the title with 86 points total, 2+ point differential against the runner-up Liverpool, and the worst % contribution to the points total from games against other teams who finished in the top 4 (8.14%, 7pts of possible 18) across the 10/11-13/14 time span.

What does this mean? Well, if anything it suggests all the frenzy around the big games isn’t necessarily captured in the data. At the very least, it suggests there’s not a consistent pattern one could apply either. One could argue the sample size of teams is too small to account for the local rivalries and other teams which are considered to be competitive for the top spots in the Premier League.

However, the question then becomes, at what point do you draw the line with your surroundings while still not introducing even more variability and complexity which increases the difficulty of drawing any conclusions from what the data suggests?

What we can say from the above data is that Neville’s claim about these type of games (against your Chelseas, Citys) isn’t quite accurate and in fact seems to vary from season to season.

What seems to be the more definitive factor in how a team is viewed is in the ever-changing narrative put out from various media outlets. Henceforth, Manchester United’s game against Chelsea is at the very least, just another game. Yet, as highly emotional creatures, it’s almost impossible to distance oneself from the hype, the narratives, little subplots and other factors which lead to the build-up of a “big game”.

So the next time you’re watching a “big game”, ask yourself, “Is this really a ‘big game’? Or am I choosing to believe in the fact that it truly is?”

Have a good one folks and let’s hope the Reds pull off a shock win!!!

Written by Editor
How does Manchester United’s Defence Compare to the rest of the EPL? (Part 1)
A New Start?