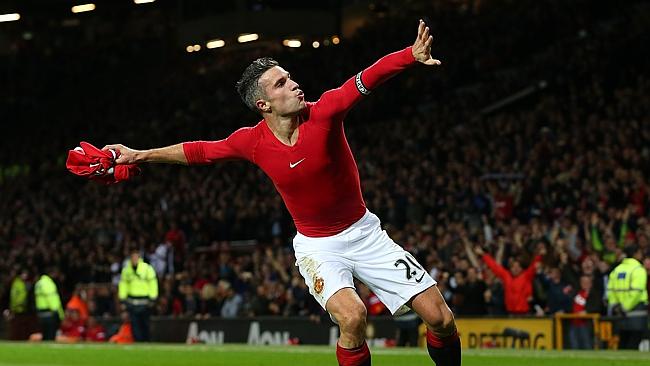 One of the main stories regarding Manchester United’s season is its shaky defence and the need for more quality in the backline. Amidst United fans’ concerns prior to Chelsea’s visit, the odds weren’t stacked in Manchester United’s favor.  And despite conceding the first goal, United grabbed an equaliser late in the final seconds of the game showing the spirit of United comebacks which had seemingly evaded the team in the season gone by.

Manchester United created more chances than Chelsea (MU:15, CFC:9) and had more shots on goal (MU:7, CFC:4) in a tightly gripped match from start to finish. The pairing of Marcos Rojo and Chris Smalling looked comfortable throughout and played their part in helping the team maintain possession, play probing passes, and keeping Chelsea’s attackers at bay.  Gaining a draw against the best team in the league was deserved for a team which put in a solid performance showing signs of improvement.

So with 9 games in, where does Manchester United’s defence stand compared to the rest of the competition? Let’s take a look.

At the beginning of the season, Louis van Gaal told the media to judge him in three months. Perhaps what he did not foresee was the ensuing injury troubles which have caused numerous occasions of reshuffling the backline as the squad adapt to his methods.

As it will be shown in the following image, when it comes to defensive injury occurrences, Manchester United are one of the highest.  If you’re seeking to build a formidable defence whilst the squad adjusts to the philosophy, methods and systems, it would certainly help to reduce the number of injuries present in the squad. Unfortunately, for van Gaal, injuries to the backline have been a re-occurring issue. 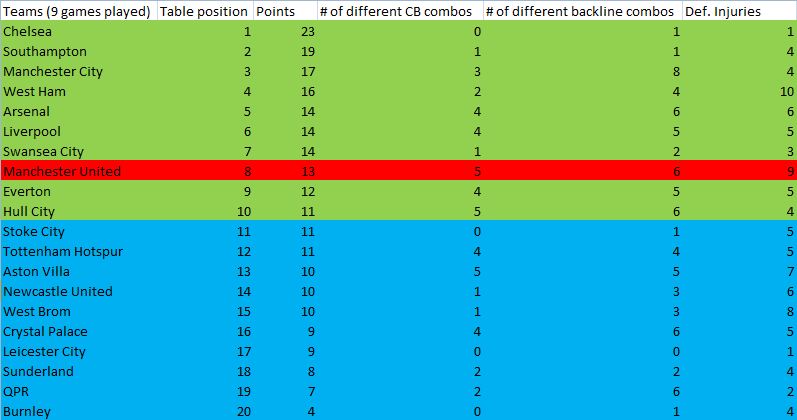 (correction: west brom has 2 CB combos instead of 1)

Here is the following graph with teams sorted by position in the table. 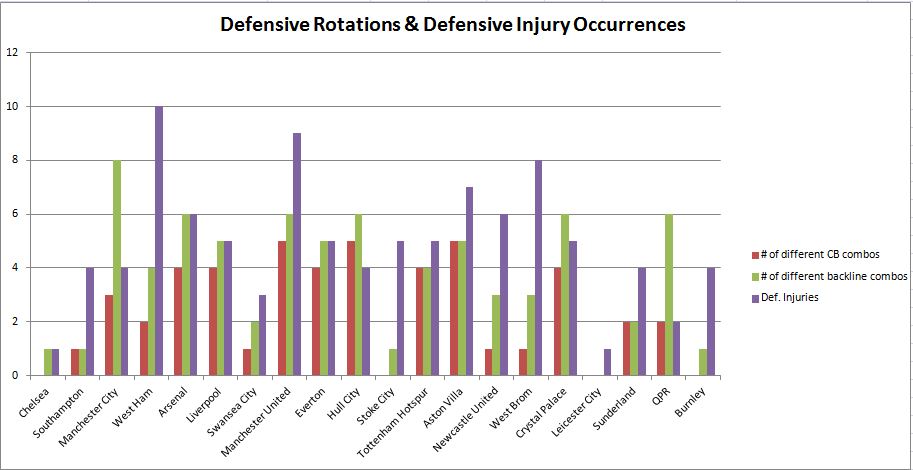 (correction: west brom has 2 CB combos instead of 1)

As you can see from the data above, not only does Manchester United have one of the highest occurrences of defensive injuries (9) but also scores highest on different number of center-back combinations (first few games started 3 CBs instead of 2 CB pair).  From this, one could infer a correlation between defensive stability offered from the backline with the number of center-back combinations used thus far this season.

It is true that the backline within itself doesn’t account for the team’s defending as midfielders and attackers can share the defensive responsibility of the team. However, adding those fluctuations into the data would further complicate the model and for the purposes of this brief study, I wanted to focus on each team’s backline to see what insight could be gained from the data.

1) Manchester City despite not having a lot of defensive injury occurrences shuffled around their backline quite frequently. Demichelis and Kompany formed the favored CB pair, starting most of City’s games thus far which could suggest Pellegrini had more freedom shuffling around the pack when needed rather than making forced changes.

2) West Ham had a lot of defensive injury occurrences yet despite this, have been able to pick up points in the table which currently sees them positioned at 4th.  Once again, the key seems to be able to field a relatively consistent CB pair while reshuffling other parts of the backline when needed.

Therefore, the trend seems to be lower variability of CB combinations along with less defensive injury occurrences leads to higher probability of gaining points. For teams in the upper half of the table, this trend seems to follow quite smoothly. For teams in the lower half of the table, there doesn’t seem to be a general trend which may further suggest not only the level of opposition for these teams faced but also the quality of their defense.

Furthermore, Manchester United fans could say the lack of a consistent CB pair has further accentuated the defensive issues present in the team & slightly hindered the team in gaining the desired results.  However, it must be noted this is only a specific aspect and there are others (tactics, game management, team mentality, etc.) which help to gain a better perspective of the performances seen from Manchester United this season.

What does seem clear is the need for Manchester United to reduce the number of defensive injury occurrences as well as the variability of CB combinations.

Part 2 will further assess how Manchester United compared to other clubs in terms of goals/chances conceded and what that may mean  now and for the future.