How does Manchester United’s Defence Compare to the rest of the EPL? (Part 2) 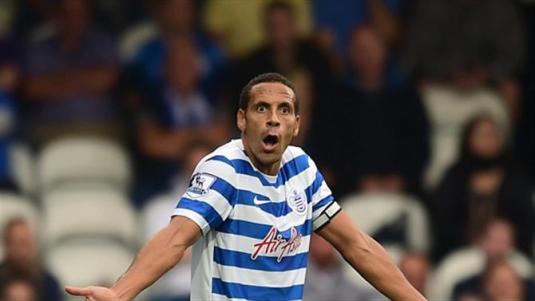 “Are you going to help me defend or what?”

To start off, pictured below is the data set used for the comparative analysis.

Each team was compared between the following categories for the 9 games played thus far:

The next three graphs highlight certain parts of the data and from these, we can make some interesting observations. 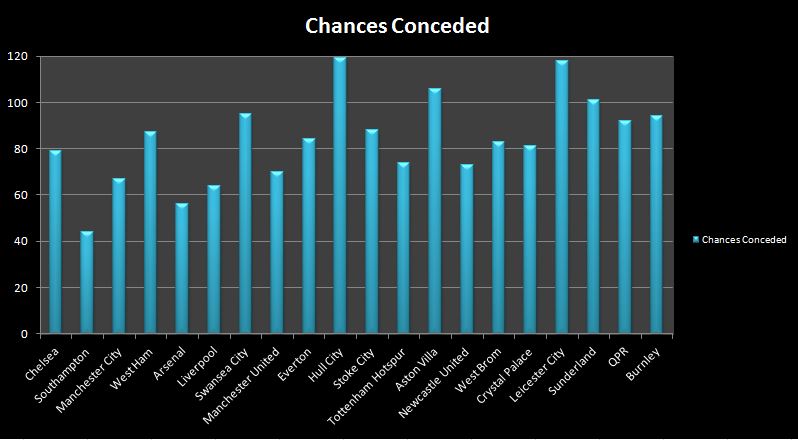 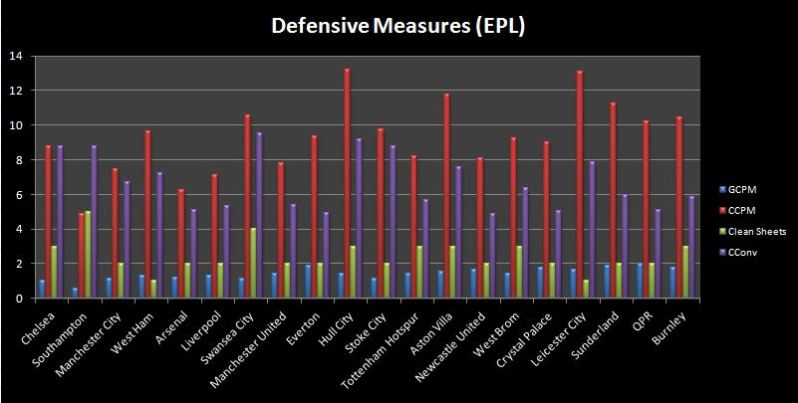 In the first graph, it’s clear to see the lower you go down the table, the higher the number of goals conceded.  While the same could be for the second, there are a couple spikes which catch the eye (namely, Swansea and Hull City).

Relative to the teams around them, Swansea concedes less goals while conceding much more chances, hence why their CConv is higher. Swansea also has more clean sheets which suggests in the games they do win, they are more likely to shut out their opponents and be involved in goalless draws.

Hull City sit 10th with the second highest CConv (9.15) yet conceded less goals and have more clean sheets than Everton.  Due to Hull City conceding the most chances in the league (119), it explains why their CConv is so high.  It also begs the question how their defence compares with other teams around them.

Perhaps using ExpG (expected goals) which better measures the quality of chances created by a team could help settle the case here.  Nonetheless, it’s not a good thing to be conceding a lot of chances as one would guess it means the defenders are being put under more pressure meaning the likelihood of conceding a goal is higher.

Southampton’s form has been one of the stories of the season thus far.  After a mass exodus of valuable players, the Saints were being tipped as relegation candidates. Yet, under Koeman’s watch, they’ve surprised everyone and currently sit second in the table boasting a huge 8-0 win over Sunderland.

On the other side of the table, QPR has arguably the worst defence in the Premier League. They’ve conceded the highest amount of goals (18), thus a GCPM of 2 which is also the highest in the Premiership. Although they don’t concede as many chances as other clubs in the bottom half of the table, they have one the lowest chance conversion (CConv) rates with 5.11.

The lower the CConv, the more likely your club will concede a goal.  Therefore, for the number of goals QPR have already conceded, the expectation is this metric will continue to decrease.

What makes it more disconcerting for QPR fans is they have low defensive injury occurrences and CB combinations but Redknapp has regularly changed the backline with the team still leaking goals.  Unless, Redknapp finds a more cohesive backline and overall team shape to slow the number of goals conceded, it could be ominous for QPR if not already.

Coming back to the top half, what’s interesting about West Ham is despite conceding more chances than teams like Arsenal, Liverpool and Manchester United as well as less clean sheets, they have more points and a higher CConv.

Arsenal have conceded less goals and less chances so does this mean Arsenal has a better defence than West Ham? Perhaps this is the case, but one could argue there is something to be said for West Ham being higher up in the table despite having lesser quality to Arsenal overall.

What’s interesting about Manchester United’s defence is coupled with the fact they’ve had a lot of defensive injuries and backline combinations, they don’t concede a lot of chances but do concede more goals compared to the teams above them.

Therefore, it seems from the chances Manchester United do give up, they end up turning into goals. Hence, a CConv of 5.38 which is higher than Liverpool and Arsenal comparatively who also don’t concede a lot of goals or chances.

Since we know Manchester United already boasts a great attack, the most improvement would need to be seen in the CConv metric if they seek to climb up the table. Giving up chances but making sure they aren’t quality ones which increase the likelihood of conceding goals.

The analysis raises some interesting questions. What can we learn about teams who don’t seem to defend well but make up for it through the attack? Should this be factored into the analysis of defences? How do the figures change when factoring in save percentages of goalkeepers from each team? What does the ExpG of the opposing team add to the discussion of analyzing how well a team defends?

Written by Editor
Derby Day Defeat
How does Manchester United’s Defence Compare to the rest of the EPL? (Part 1)