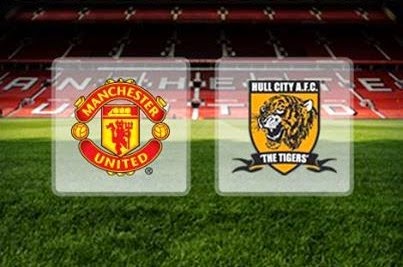 After the euphoria of United collecting their first away win of the season last week against Arsenal, it was time to return home and welcome to Old Trafford Hull City and their manager, ex United captain Steve Bruce. Bruce was a wonderful servant to our club and totally deserved the warm reception he received from the home fans on his 700th premier league game as a manager.

In his pre-match press conference Louis van Gaal gave the fans encouraging news on the injury front, especially about Marcos Rojo, but sadly confirmed that Luke Shaw would be out for 4-6 weeks, at the same time poking fun at United’s twitter account about how they miss reported Daley Blind’s injury.

The United starting eleven included the quick return from a shoulder injury of Rojo in defence along with Valencia, Smalling and Young on the left, in midfield  Di Maria, Carrick, Fellaini, and a return to the starting line up for Mata. Up front the two strikers were Rooney and van Persie.

This was a big match for Robin van Persie who has received criticism from many people about his lack of commitment, especially against Arsenal last week, and with Falcao on the bench the pressure was on him. Last but certainly not least De Gea in goal.

All the planning done before the game came to a halt after only 9 minutes when United were again unlucky with an injury when Di Maria pulled up with what looked like a hamstring injury, and was replaced by Herrera, playing his first game since his rib injury. 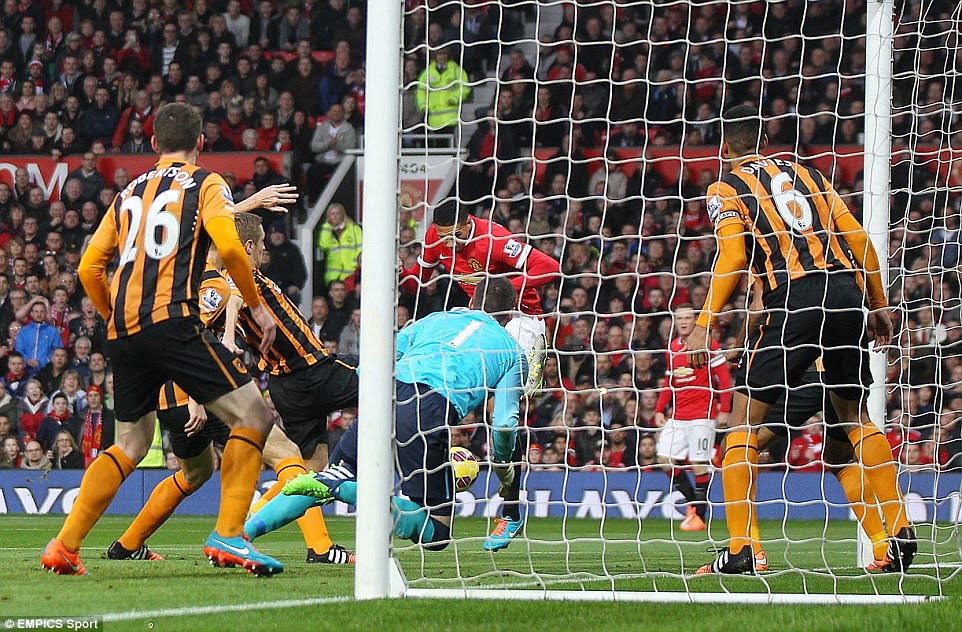 The early breakthrough for United came in the 15th minute from an unlikely source, Chris Smalling, whose shot from close range was bungled over the line by the Hull keeper McGregor. Smalling played a very positive game in the first half moving forward at every chance and could even have had a second on the half hour with a shot that wasn’t too far away.

United’s second came on 41 minutes when Rooney combined wonderfully with van Persie and found the net with a fine strike from outside the box. 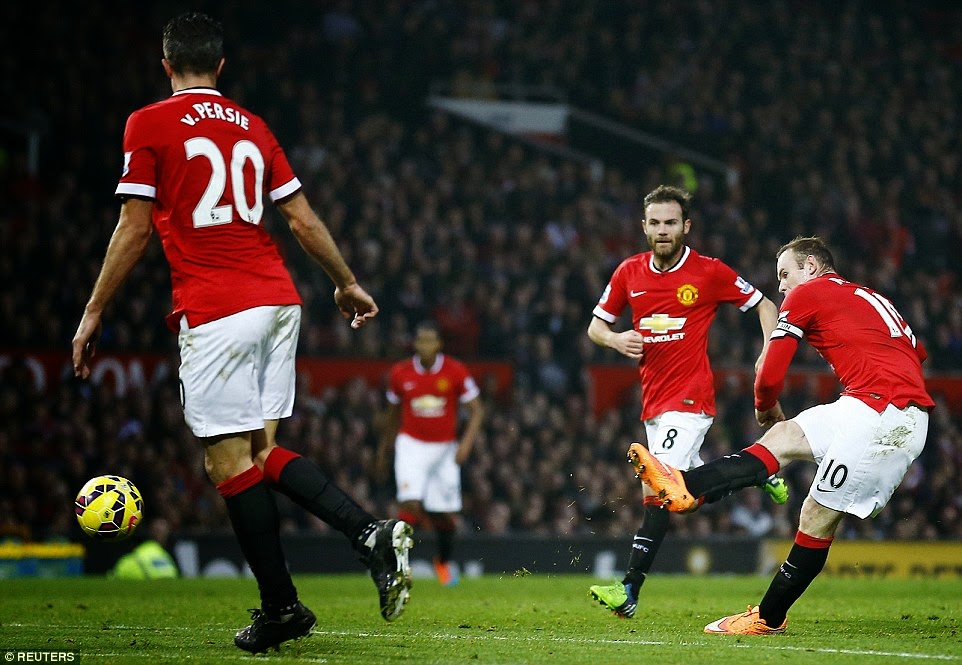 The second half continued in the same vein as the first with United having almost all the possession, and the fans were in fine voice filling Old Trafford with renditions of the annual Christmas song dedicated to Eric Cantona, who signed for Man United this week back in 1992.

Robin van Persie almost added a third with a copy of his flying header for Holland, this time it was saved and judged to be offside, but it was great football with a pin point pass from Michael Carrick, who with Fellaini had total control of the midfield. 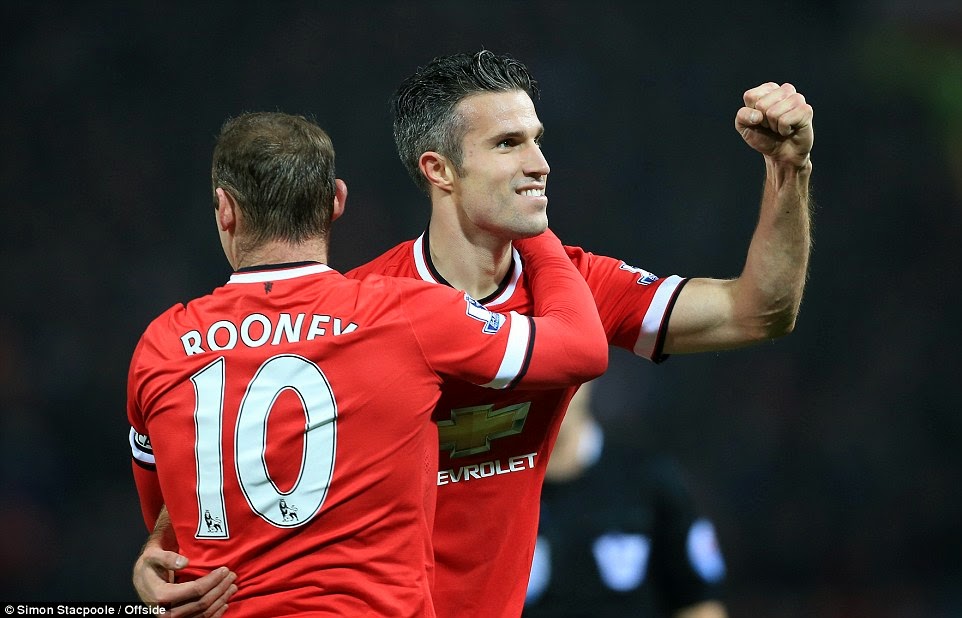 Then in the 66th minute van Persie answered his critics with a superb strike with his left foot into the roof of the net from the edge of the box to make it 3-0. That was to be his last action of the day as he was replaced by Falcao.

I wonder if van Persie saw Falcao stripping off and decided to go out with a bang. Falcao could have got on the score sheet at the death had it not been for a goal line clearance.

Even though our defence didn’t have much to do as Hull’s attack was toothless, I thought Chris Smalling had an outstanding game and could have scored a hat trick, someone must have taken him aside and had a serious talk with him, as his performances have vastly improved in the last two matches. Rojo performed well on his return and had an exceptional pass rate. 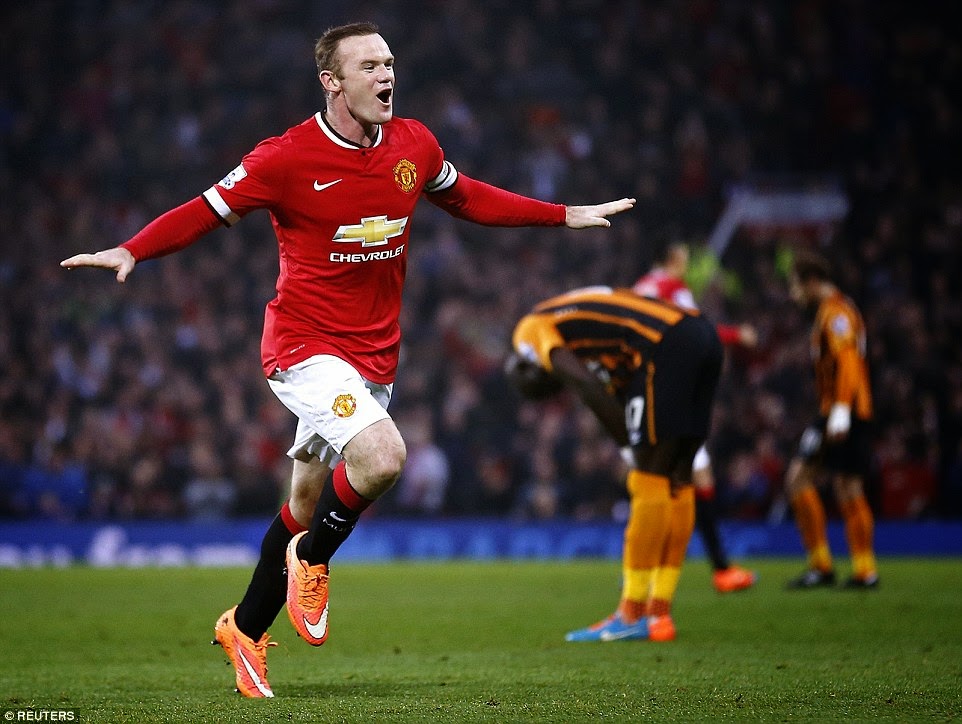 The man of the match for me was captain Wayne Rooney, who never stopped running and completed a total of 66 passes, topped with a well taken goal. He looked to be struggling at the end and hobbled off at full-time. I hope it’s not too serious. Herrera also impressed after coming on for Di Maria and should keep his place against Stoke City.

This was very much a routine win for United as Hull didn’t offer anything close to a threat, and at times it was a chance for United to improve on their passing as Hull couldn’t get a hold of the ball.

A third straight win is exactly what United needed to maintain a run of form that keeps them heading in the right direction, and to keep the confidence high as matches are now coming thick and fast, with another home match against Stoke City on Tuesday night, followed by a difficult away trip to high flying Southampton.

Then we enter the busy Christmas period with games against Liverpool (h), Aston Villa (a), Newcastle United (h) and Spurs (a). It will be imperative that we have a full squad available and hope we don’t succumb to more injuries.

I firmly believe that come the New Year we will be up into the top three of the league, and we can start to finally put the nightmare of 2014 behind us and look forward to the second half of the season and 2015.

Thanks again for taking the time to read my thoughts.

Written by Editor
Why Didn’t Manchester United Go for the Jugular?
How United did against Hull last season