How United did against Hull last season

Saturday afternoon sees Hull City visit Old Trafford, a game that saw a 3-1 win for the home side last season. Interim boss Ryan Giggs gave home debut starts to two forwards, 20-year-old Welshman Tom Lawrence and teenager James Wilson, the younger man rewarding the Manager with a brace in a game he’s unlikely to forget. It was a game tinged with drama, as the home side bid farewell to captain Nemanja Vidić and Giggs himself made an appearance on the pitch, to make those of us old enough to remember pine for the days of the Player-Manager. 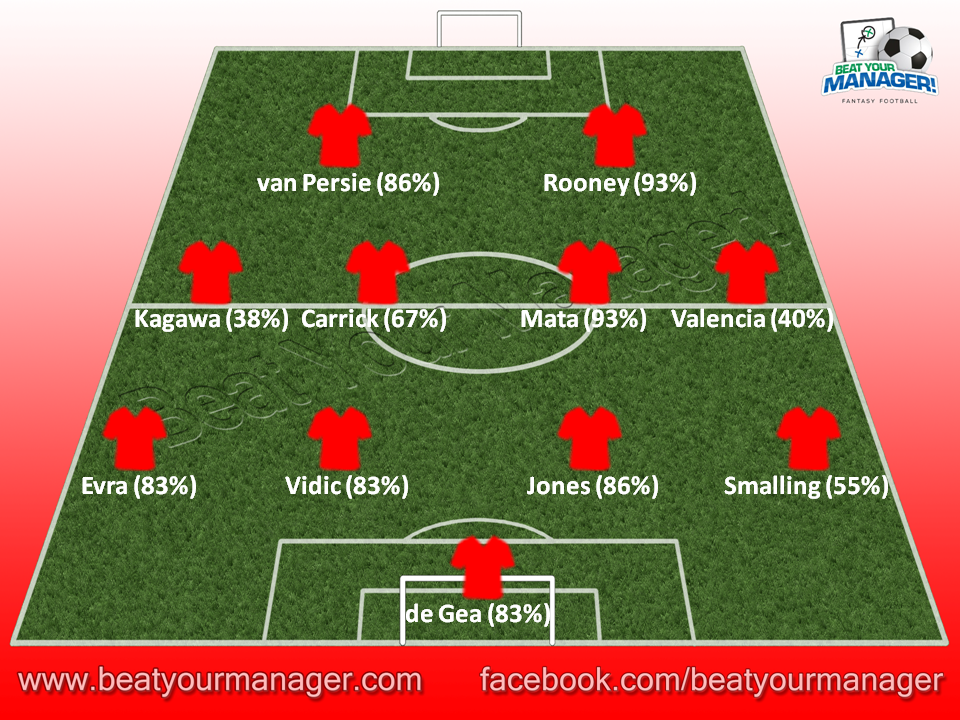 To see how MUFC fans may be thinking about this game, we looked at the Beat Your Manager! Fantasy Football data from this fixture last season, to see what players were picked for the lineup by the average fans last year.

Beat Your Manager! Fantasy Football is a game similar to “Football Manager”, but applied to live football, where you manage your favourite Club and pick lineups, bench, formations and substitutions, all in real-time. When fans play the game, the Beat Your Manager team can measure the popularity of different players, by looking at how frequently they are selected for the starting lineup, substitutes bench or not selected at all.

The app ran for the 2013/4 EPL season and is currently inactive while the developers are creating a redeveloped version – we’ll keep you posted on when it’s going to re-launch.

Formation: 4-4-2 by far the most popular choice

An overwhelming 45 per cent of the Old Trafford faithful went for a 4-4-2 formation for this game last season, with a more attacking 4-3-3 much further behind in second place, selected by only 17 per cent of fans.

No surprises in goal with 83 per cent of MUFC fans selecting David de Gea for the lineup, making him United’s 5th-most popular player for this match. Giggs agreed with the fans and de Gea lined up between the posts.

Defence: Giggs makes lots of changes in the back four

United fans had three clear fan favourites in defence for this game, with Phil Jones the club’s most popular defender and jointly (with van Persie) most popular player on an 86 per cent rating for the lineup, with Nemanja Vidić and Patrice Evra very close behind, both on 83 per cent.

After Evra, approval ratings for United’s defence dropped drastically; with Chris Smalling (55 per cent) just edging out Rio Ferdinand (50 per cent) for the fourth spot.

Giggs went for a radically different back four, fielding Antonio Valencia instead of Vidić and Alexander Büttner (only 10 per cent fan rating) instead of Evra, but keeping faith with fan-picks Jones and Smalling

Juan Mata was United’s most popular midfielder and jointly most popular player, with a 93 per cent rating approval from fans.

Michael Carrick was substantially behind Mata, on 67 per cent, with Valencia selected for the midfield lineup by only 40 per cent of fans and Shinji Kagawa close behind on 38 per cent.

Wayne Rooney and Robin van Persie fit were the clear favourites upfront for MUFC fans for this game, with their respective 93 per cent and 86 per cent scores making them the 2nd- and 3rd-most popular players.

Giggs opted to start van Persie on the bench while Rooney did not even make the squad, the gaffer instead giving a start to two untested forwards Lawrence and Wilson, both of whom did not get a single fan vote for the lineup. Wilson rewarded his manager with a goal in either half and was eventually replaced by van Persie, who capped the day off with a third goal for the home side 4 minutes from time. 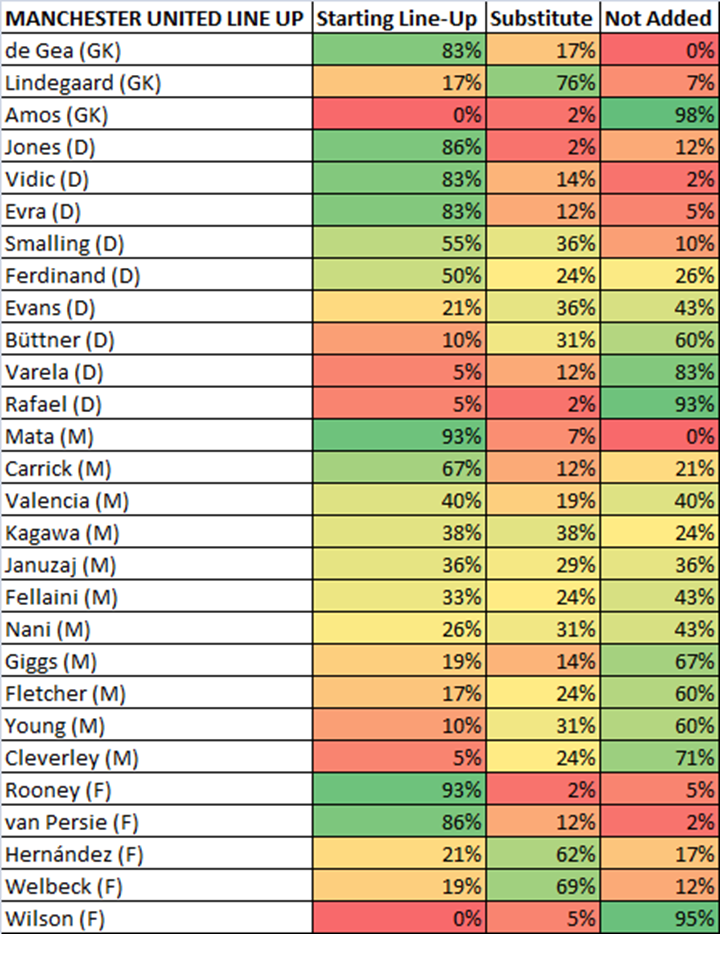