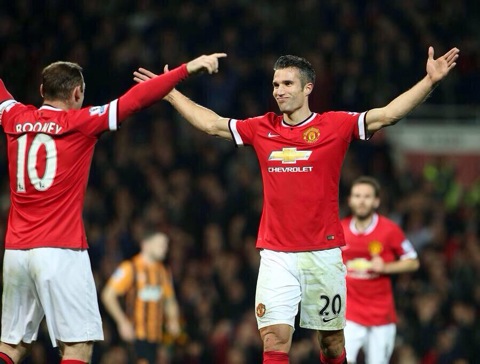 Redemption!! Robin van Persie abated all criticism when he scored a sumptuous goal to take Manchester United’s lead to 3-0 against Hull.

But instead of pouring on even more attacking impetus, United eased off the gas pedal as it moved Hull all over the place. Maintaining possession but also creating openings for more goals to be scored. While United still attacked with some verve, it was clear to see the same intent of directness was not there.

As fans, we love to see a big drubbing, but what’s important to remember is that we are the fans. We largely come to the spectacle of these games because of the entertainment and to be further associated with the club we are emotionally committed to.

So while this is true for us, it’s a completely different world for players and most importantly, the manager.

Not only is the manager responsible for preparing the game plan for the most recent game but he/she also has to keep the next game in mind and the game following that as well. Hence, we find the importance of opposition analysts as they can help the manager make these future plans so that the team is better equipped for that eventual clash.

Now, that brings us to the concept of game management. An underrated tool among fans, but a paramount one for managers. If there’s one thing managers would love to have more control of, it’s more control of their players having more control of managing the game.

If a team likes to play possession-oriented football, problems occur when they don’t prepare for a team who won’t respect their form of possession football. It’s like watching positional chaos as the team who endears to possession football, cluelessly runs into pressing traps, gives up the ball in cheap areas yet continues to make the same mistakes again and again. What was that Einstein quote about insanity again?

Below I will list some reasons as to why NOT going for the jugular was the right decision:

“Won’t players get injured anyway?” you ask. Well of course, it’s entirely possible. However, that does not refute the notion of attempting to minimize the risk of injuries for your team as the game becomes effectively decided.  Especially when the next game is within 72 hours of the last one.

van Gaal is one of those managers who takes little for granted. So there should be little surprise when you see his team ease up after obtaining a comfortable lead.

Now, what I wish to address is that all the above points were made in relation to the fact, Manchester United have a game on Tuesday following a match they played on a Saturday.  So if there was no midweek fixture, perhaps being a bit upset that the team didn’t push on after taking a commanding lead would have more weight.

However, in this case, with injury concerns, players coming back, getting adequate rest, communicating the game plan for the next team and tying all these factors among others together, you can start to see why van Gaal wanted the team to be more cautious in their exertion.

And let’s not forget within this period of easing up, Falcao almost scored the fourth goal. I say this to make the point “hindsight is 20/20”.