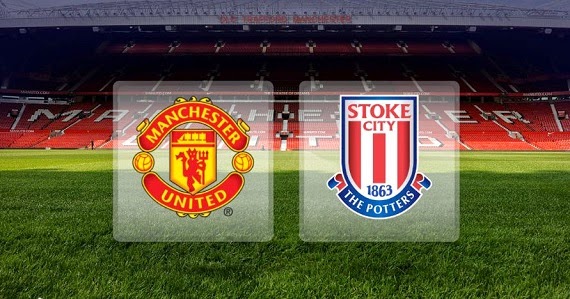 There is no rest for the wicked as Manchester United welcomed Stoke City to Old Trafford on Tuesday evening three days after the convincing 3-0 win over Hull City.  Once again we saw another United legend return as opposition manager, this time it was the turn of Mark Hughes to try and do what Steve Bruce couldn’t manage on Saturday.

Much talk prior to the announcement of the starting eleven concerned whether or not Louis van Gaal would tinker with the team that beat Hull City so easily on Saturday, or not. Di Maria wasn’t available after picking up a hamstring injury during that match, Herrera continued in his place where he had given a man of the match performance against the Tigers. The main news was that Wayne Rooney was not to take part, and in his place the young striker James Wilson, who celebrated his birthday this week, was given a chance alongside Robin van Persie. Once again Falcao was to start on the bench. Michael Carrick was named as captain for the match in the absence of Rooney.

As the first half progressed it became clear that Stoke City would be harder to break down than Hull City had been. The first real chance fell to Herrera who blazed over when set up by van Persie after a mistake in the Stoke defence. But Herrera would redeem himself after 21 minutes when he sent a looping cross over from the left, which was met by Fellaini, who rose majestically to power a header in to make it 1-0. 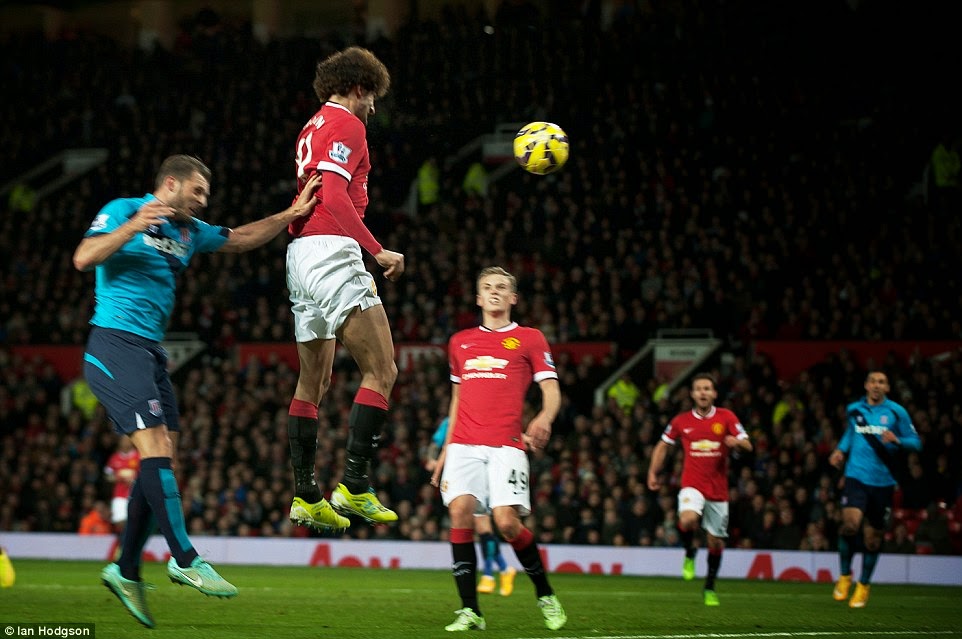 That was Fellaini’s first goal at Old Trafford and he clearly enjoyed it. United pressed for the second, but after 39 minutes Stoke pulled level through Nzonzi after Fellaini went down under a soft challenge and lost possession. United’s defence were slow to close down Nzonzi and he struck well to leave De Gea with little chance. To their credit, United immediately tried to grab a second before half time with Fellaini coming the closest, however his shot lacked any power.

The second half had United pressing for the second goal, but they had to wait until the 59th minute when they were awarded a free kick. Mata delivered from the right and it sailed into the far corner of the net. Both Mata and Rojo wheeled away in celebration, with Rojo claiming he got the final touch, but on closer inspection Rojo didn’t manage to get his head to it. 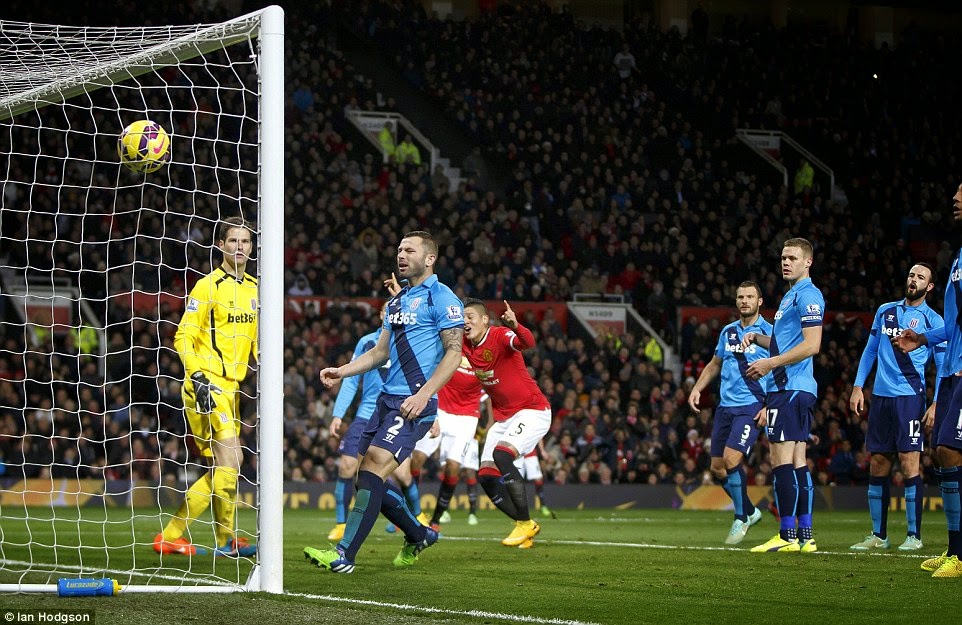 After the goal the match became a little lackluster with few chances falling to either side, and it looked as though United would see the match out comfortably. Then in stoppage time all hell broke loose in the United penalty area with David De Gea making two point blank saves and a goal line clearance from Ashley Young. 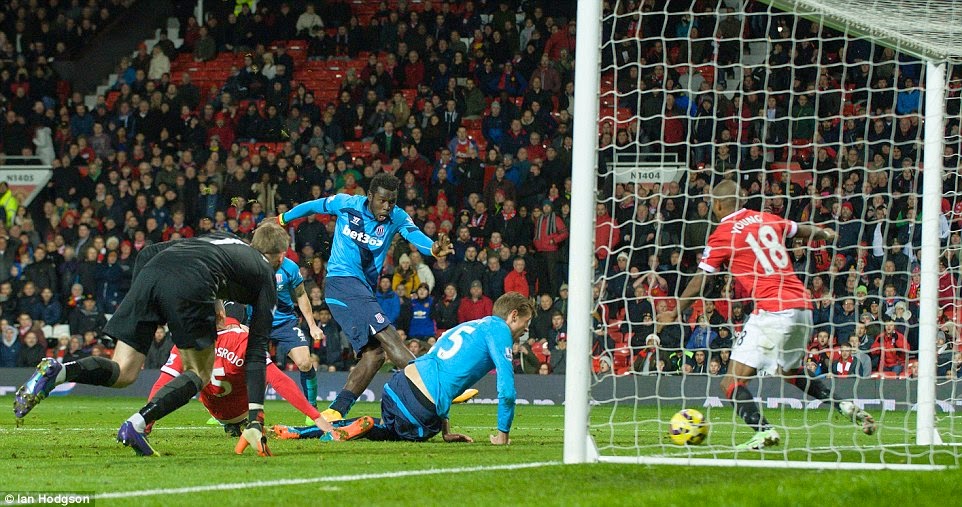 Why is it that United continue to put their fans through such drama? The hearts of the fans missed more than a few beats for the last minute or so, but once again the PFA fans player of November, De Gea, came to the team’s rescue, proving that he is surely the number one keeper in the world at this moment. 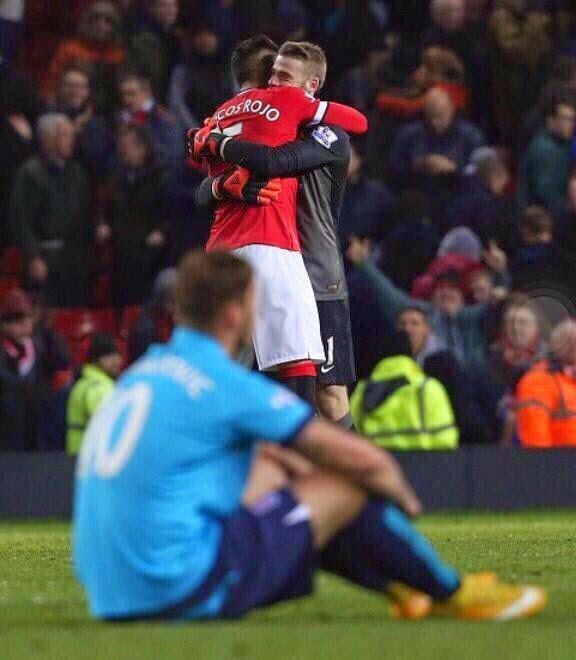 James Wilson looked a little out of his depth at times, and struggled to get into the match until later in the second half when he had a good chance to make it 3-1. It was great to see him have the confidence to go it alone and try to score, even if a pass to van Persie would have been the better option. But he is a young talent who will certainly get many more chances to show his immense goal scoring ability. He would have welcomed the opportunity to gain valuable experience and it was no surprise to see him replaced by Falcao after 78 minutes.

This was a performance from United that should send a warning to the rest of the league, and it’s that van Gaal’s men are finally playing as a unit, and looking like a team that is delivering on his philosophies. It wasn’t a great spectacle but United worked hard and ground out the result. My choice of man of the match is Juan Mata. The Spaniard worked tirelessly for the team, he always looked to try and get the attack moving and of course scored the winning goal. This was the club’s fourth straight win, and confirms their place within the top four of the league.

On now to next Monday, and the start of a busy schedule over the coming weeks, with United set to visit Southampton, who are enjoying a fine start to the season under new manager, Dutchman Ronald Koeman . They will be looking to bounce back in front of their own fans after a 3-0 home defeat by Manchester City, and I fully expect a difficult match, but I believe United will continue their momentum and come away with all three points in readiness for the next match, the big one, Liverpool at Old Trafford.

Written by Editor
The Red Devils go marching on.
Why Didn’t Manchester United Go for the Jugular?