Hi and welcome back to my review of Manchester United’s 2014. 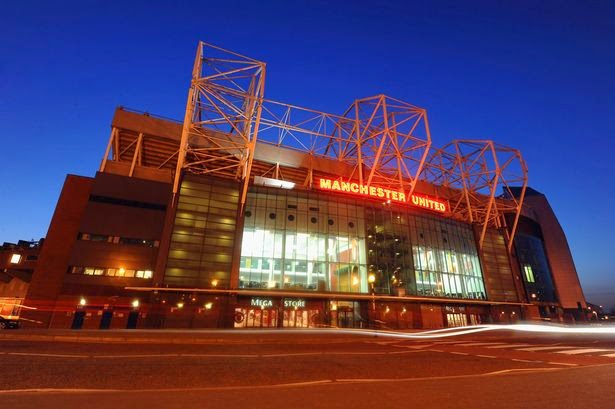 On the 19th of May 2014, it was confirmed by the club that Louis van Gaal would replace David Moyes as Manchester United manager on a three-year deal. Ending speculation that had surrounded the club since the removal of Moyes.

The appointment of the Dutch coach seemed to generate a very positive feeling among the fans. Social media was buzzing with the news. We all new of his pedigree as a manager, and the success he had brought to his previous sides. Champion at Ajax, Barelona, AZ and Bayern Munich. 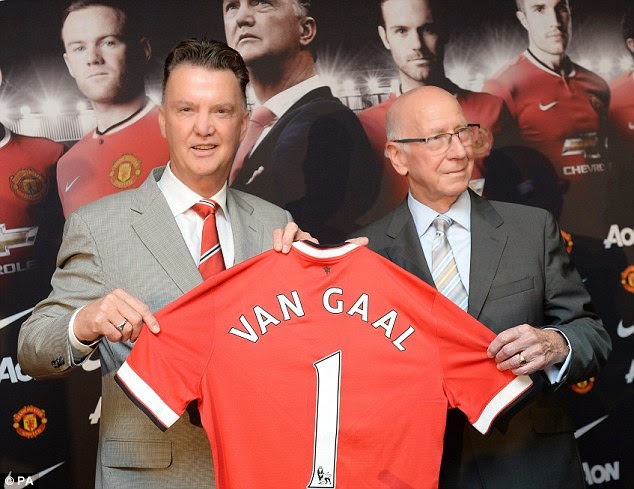 He was known as a very strict disciplinarian, but also a manager who brought the best out of his players, players that had nothing but respect for him. Here was the personality that United needed to pick the team up and move them forward.

One question remained though. Was there a place in the new set up for fans favourite Ryan Giggs? Was he even in the plans of van Gaal? The answer quickly arrived. Following a meeting between the two men over in Holland, Giggs was named as the assistant manager. This was a very shrewd appointment by the new manager, as Giggs was not only his link to the history and tradition of United, but most importantly the fans.

There was only one stumbling block to van Gaal joining United straight away, and that was the small matter of him managing the Dutch team at the World Cup in Brazil. The day to day running of the club was left to Giggs and CEO Ed Woodward.

In their first match at the World Cup Holland destroyed Spain 5-1. United striker Robin van Persie scoring the first with a header that seemed to defy gravity, as he started the rout that had United fans drooling with the thoughts of what we could expect from our new manager in the coming season.

While van Gaal was enjoying himself over in Brazil,  back home in Manchester new signings were arriving. Two players that had been rumored to have been courted by Moyes, Ander Herrera and Luke Shaw, were unveiled as the first signings under van Gaal. Many people argued that the deals were already in place well before van Gaal’s appointment. However, the Dutchman confirmed that he had given his approval.

Herrera joined from Athletic Bilbao on a four year deal thought to be around £28 million. Luke Shaw’s transfer from Southampton made him the most expensive teenager in the world at 18. Another four year deal at £30 million. The Summer was getting off to a good start.

Holland comfortably won their group at the World Cup by winning all their matches, and  entered the knock out stage. They defeated Mexico and Costa Rica before being eliminated by Argentina in the semi final on penalties. A great performance from the team under van Gaal’s guidance. But now it was time for Manchester United to welcome their new saviour with arms wide open.

There was a small matter of who would be the new club captain under van Gaal. Some were calling for van Persie, highlighting the Dutch connection, others were pushing for Carrick or Rooney. The manager chose Rooney, citing that an English club needed a British player to lead the team. Darren Fletcher was given the role of vice-captain. Which would change to Michael Carrick towards the end of the year, as Fletcher wasn’t getting enough playing time.

At the end of July van Gaal took his team on a pre season tour to the USA. During that time they won all their matches, beating LA Galaxy 7-0 in van Gaal’s first match in charge.

That was followed by victories over Roma and Inter Milan. What a start to his career with United, and better was to come with victories over Real Madrid, Liverpool and Valencia. That was all the evidence the fans needed to be sure that in the coming season we would be strong competition in the Premier League.

When the team returned to cooler weather back in Manchester there would be more news on the transfer front, and what news it was. Marcos Rojo joined from Sporting Lisbon. A utility defender who could fill in at left back or in the center. Then the big one, Argentine winger Angel Di María bought from Real Madrid on a five-year contract, the £59.7 million fee setting a new record for a signing by an English club, and taking the club’s summer spending to a reported £130 million.

Then on transfer deadline day there were two more additions to the squad. Daley Blind, who had played for van Gaal’s Holland team in Brazil, joined from Ajax to bolster the midfield. The last signing was a coup. Radamel Falcao came to United on a season long loan from AS Monaco. Falcao had had a terrible year with his knee injury, but when fit what a goal scorer. 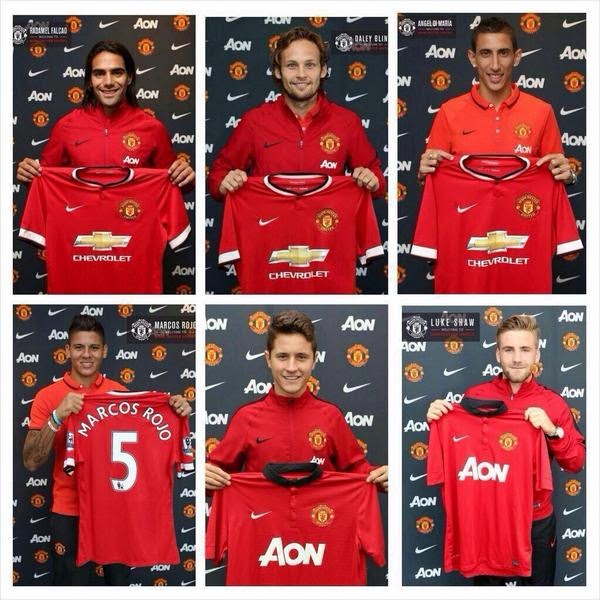 As the new players came in it was time to say goodbye to a player who had come through the ranks at Old Trafford, Danny Welbeck. He joined Arsenal for a bargain £16 million. Some fans, ex-players and pundits, spoke of the death of United’s soul. This is ridiculous, in the reserves were the likes of James Wilson, who has the pace and eye for goal that we need as back up.

Anyway, who would they rather have, a world class proven striker in Falcao, or a player who in all honesty never lived up to the hype that surrounded him. I never thought Welbeck was up to scratch as a goalscorer, and I for one was not sad to see him depart. This was not a case of van Gaal ripping up the tradition of United’s youth policy, but simply him saying that Welbeck wasn’t good enough for him.

So, on the eve of a new season the stage was set for United to put all the problems behind them, and with a new manager and squad challenge once again for the title. Van Gaal asked the press to judge his progress after three months. After the pre season results, and quality signings, the atmosphere at Old Trafford for the season opener was bouncing with excitement.

Unfortunately, Swansea City hadn’t read the script. Van Gaal lost his first official game in charge, a 2–1 home defeat to the Swans. Then United lost 4–0 to League One side Milton Keynes Dons in the second round of the League Cup. It wasn’t until the fourth match of the league season, a 4–0 home victory over Queens Park Rangers that Van Gaal won his first competitive game.

The main problem to the poor start was down to injuries, especially in defence. The team were already missing the experience of Vidic, Ferdinand and Evra. Also, the players were finding it difficult to adjust to the new system of three at the back and five across the midfield, with wing backs supporting the defence. The philosophies of the Dutch manager were not getting through to the players, but it was early days.

United didn’t have the distraction of the Champions League which meant the team had the luxury of resting between matches. It was not a good sight to see other teams battling it out over Europe without United involved. The main target for the season ahead was to return to the illustrious competition.

After 10 league matches, United were in ninth place with 13 points and two victories, their worst start to the season since 1986–87. They were also suffering from injuries, including to new signings Herrera, Rojo and Falcao. These injuries and suspensions opened the door for two of United’s youngsters to show their qualities. Tyler Blackett, and especially Paddy McNair, were given the chance by van Gaal, and they both performed well. Showing that the youth system was thriving.

United’s first away win of the season came in the capital defeating Arsenal 2–1 at the Emirates Stadium to ascend into a lofty fourth position. The match was a smash and grab win, but a win all the same. This seemed to generate a new found believe within the sqaud, and they embarked on a nine game unbeaten run , 7 wins and 2 draws, right up until the last match of the year at White Hart Lane.
That run included a 3-0 win at home over dreaded rivals Liverpool. The good times were returning.

The last match of the year against Spurs was the first time United had fielded the same eleven players in consecutive games for over two years.

The man of the season so far has to be our No.1 David de Gea, whose performances have been world class. At times his saves have prevented the team from losing. No more so than in the match against Everton at Old Trafford. Not only did he save a Baines penalty, but in injury time athletically got his finger tips to prevent a certain goal attempt by Everton’s Oviedo. United won 2-1. Thanks mainly to him.

With rumours surrounding Real Madrid’s interest, it really is imperative that United get around the table to discuss a new contract for de Gea as quickly as possible to squash any chance of him returning to his homeland.

Two other players that deserve a special mention for their performances are Fellaini and Carrick. Fellaini has looked a totally different player compared to the one who flattered to deceive under Moyes. From a player who looked like his future lay somewhere else to an important cog in the middle of the park alongside Carrick. It’s no coincidence that United haven’t lost a match since Carrick returned from injury. He has shown his class both in midfield and defence. 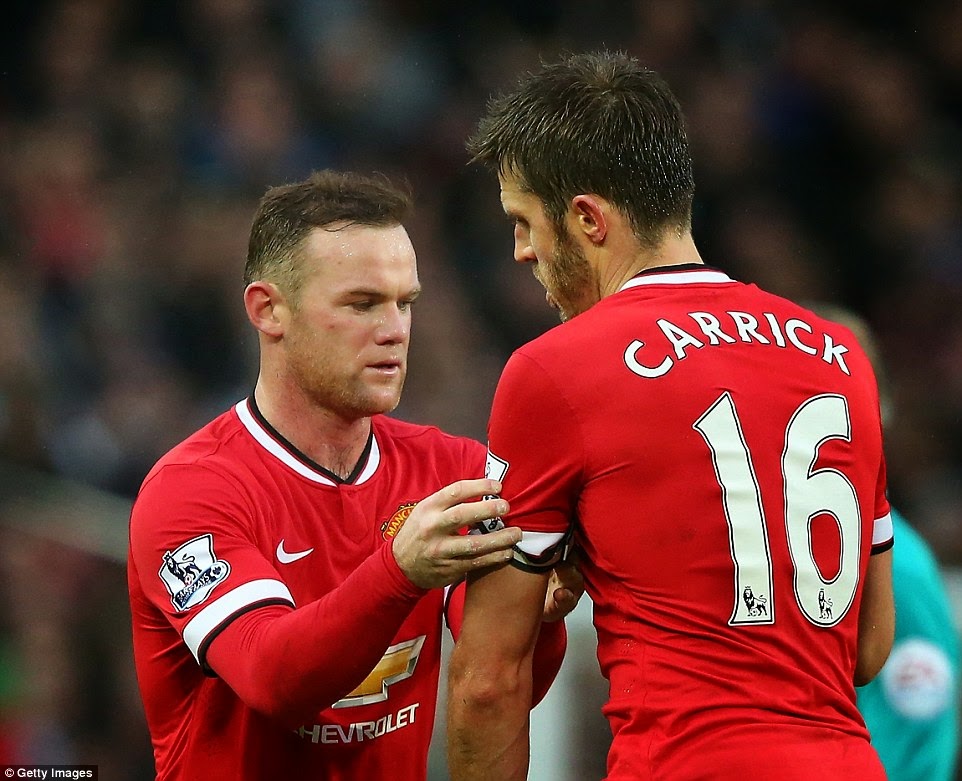 Ending the year in the top three and unbeaten for two months certainly shows the progress that is being made. Van Gaal has had to cope with an unbelievable amount of players being injured, including the Summer signings, who have all suffered from varying degrees of shoulder, knee, ankle, rib, and pelvis problems. However, once they all return and play together, other teams beware.

There you have it, a year which started and finished poles apart. Twelve months that has ended with the Red Devils riding high where they belong. In a position to challenge for the top honours.

A year in which the supporters had to endure the worst season in the club’s illustrious recent history, fans who also had to put up with the ridicule that came with that, but who never stopped following the team home and away. Getting behind the side through the tough games, and most importantly, never stopped believing that the good times would return once more.

Not so much a phoenix rising from the flames, but more akin to a sleeping giant waking from its slumber ready to trample all over any team that stands in its way.

I hope you have enjoyed reading my Manchester United 2014 year review. Please continue to follow my blogs throughout the remainder of the season.