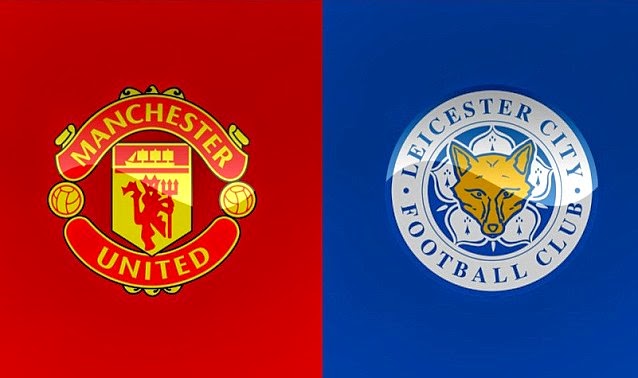 The last time these two sides met it produced a match filled with goals, eight in total, an early entry for goal of the season, defensive mistakes, baffling referee decisions, two penalties, a red card and a win for Leicester City. What would today’s match have install for everyone?

That match was back in September. It was, as van Gaal described it, his darkest moment as manager of Manchester United. Now Leicester are propping up the Premier League and the 5-3 defeat of United seems an age away for the blues, but for United the embarrassment is still fresh in the memory, therefore today was a perfect opportunity to put the record straight.

The last match at Old Trafford was the deflating defeat to Southampton followed by two away games, first came the scrappy win away at QPR then the depressing scoreless draw in the 4th round of the FA Cup at Cambridge. A positive response was needed by the team to lift the fans and themselves.

The main team news prior to the match was of a muscle injury to Michael Carrick, which is likely to sideline him for around four weeks. The United starting XI van Gaal put out comprised of: De Gea, Valencia, Jones, Rojo, Shaw, Blind, Januzaj, Rooney, Di Maria, van Persie and Falcao.

No place for Fellaini, Herrera and Mata who would all start on the bench presumably with one eye on the FA Cup replay coming up in mid week.

The players wore black armbands as a sign of respect for the Munich victims who will be remembered this coming Friday the 6th of February. 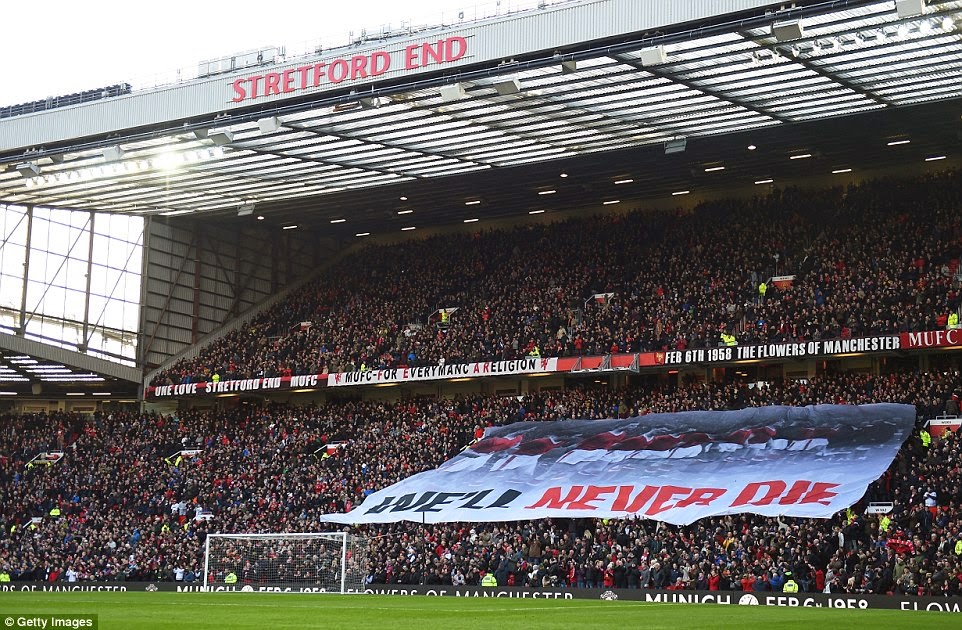 As the match got underway Robin van Persie started as brightly as the weather as he tried to latch onto a couple of through balls over the top. In the opening minutes it became obvious that Leicester were more than happy to sit back and let United have the majority of the ball and defend in numbers to limit the amount of chances the home side would have. It was a tactic that seemed to be working.

In the first twenty minutes only a tame effort from Di Maria from outside the box was all United had to show for their possession. Then van Persie had a chance following good work by Luke Shaw who crossed from the left but the Dutchman uncharacteristically totally miscued his shot.

Then in the 27th minute van Persie’s persistence paid off when Blind hit a ball over the top of the defence which the striker did well to hit home first time to put United 1-0 up. A true case of ‘Double Dutch’. The goal seemed to give the home side new found confidence which spurred them on to score again after five minutes.

Robin van Persie turned provider as he laid a delightful pass into Angel Di Maria who let loose a shot which Mark Schwarzer in goal could only parry into the path of an on rushing Falcao who got in-between two defenders to toe poke the ball home from close range. 2-0 ahead and cruising.

Once again Di Maria and Falcao linked up well as they searched for a third goal but unfortunately Di Maria’s final ball to the Colombian was behind him and the move broke down.

A minute before half-time and United won a corner on the left which was taken by Rooney, yes that’s right Rooney not Jones, as the ball came over Blind flicked it on with his head and the unfortunate Wes Morgan managed to put it in his own net.

The end of the first 45 minutes and United were in total control leading 3-0.

As the second half progressed United passed the ball around with ease as Leicester seemed to have given up any hope of getting back into the game. Adnan Januzaj was beginning to shine on the left as in one particular moment he went past ex-red Simpson as if he simply wasn’t there.

Rojo was playing with a growing assurance and Daley Blind hardly put a foot wrong. Blind’s anticipation of the play was outstanding and he was definitely having his best game in a red shirt.

David de Gea had had nothing to do until yet another mistake in a match from Phil Jones who after a poor back pass allowed Leicester striker Ulloa a run on goal. Thankfully the Spanish keeper was alert enough to get a hand to the ball just before the striker could do any damage.

Louis van Gaal showed his intentions on 70 minutes when he replaced van Persie for defender Paddy McNair, a clear sign that he wanted to sit on the 3-0 lead. Then Valencia made room for Mata and Wilson came on for the remaining ten minutes at the expense of goalscorer Falcao.

Then as United were coasting Leicester scored a consolation goal in the 80th minute when Wasilewski headed in at the far post from a Drinkwater cross. I’m certain van Gaal will be less than pleased with the lack of marking to allow the visitors their only goal from their only attempt on target.

United offered little in the way of chances with the only clear opportunity falling to the record signing Di Maria who did all the hard work to put himself in a great scoring position then inexplicable ballooned the ball way high.

It ended in a 3-1 run of the mill win for United and a valuable three points which moves them up into third place in the league.

Many positives can be taken from the match. For example the displays of Blind, Rojo, Di Maria and Falcao, and the two strikers scored a goal apiece. Having said that, I was a little disappointed that we didn’t go for the kill in the second half to cement our total dominance of a poor visiting team.

The match was won in the first 45 minutes, but I would have liked United to have stepped up a gear and not let Leicester have any glimmer of hope. At times the reds were a little too complacent and against stronger sides we will be made to pay.

On a side note with Carrick out for the next month I wonder why van Gaal went with Januzaj and not Herrera in the midfield diamond formation. A role which I believe the Spaniard is better suited to more so than the Belgian youngster, who once again let the game go on around him without stamping any authority on the play.

The transfer window has been relatively quiet with more activity on the exit door than the entry. Long serving Scot Darren Fletcher looks set to complete a move to West Ham after giving his best years to United, Brazillian Anderson is likely to put an end to his misery with a move home to Internacional and Ben Amos has joined Bolton on a month loan. As regards players in, at the time of writing, only defender Sadiq El Fitouri has been signed from Salford City.

Even though Louis van Gaal stated in his press conference that no new players will be signed in this transfer window the rumours surrounding an offer for German international Mats Hummels still persist as do the reports still linking David de Gea with Real Madrid, the sooner we tie the keeper down to a new contract the better.

Next up is the FA Cup replay with the visit to Old Trafford of Cambridge United who fully deserve their moment in the spotlight, but that’s all it should be, a moment. I fully expect United to knock them out convincingly and set out a marker that the side want to win the oldest cup competition. With the teams that are still involved, or more to the point not involved, the cup is United’s best chance of silverware. Here’s hoping the team and the manager feel the same.