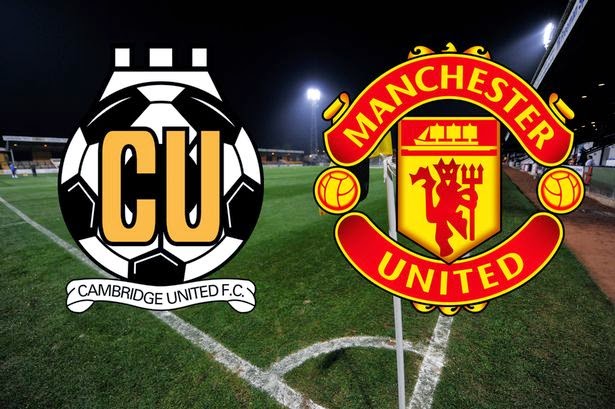 An FA Cup 4th round tie between two sides, one of which is struggling in their league to find any cohesion and rhythm and with no realistic chance of ending the season as champions, the other was Cambridge United.

There was a big question following the victory over QPR last week. Would Louis van Gaal succumb to the shouts of the fans and keep a back four or prove his stubbornness and start with his favourite 3-5-2 system?

Van Gaal admitted this week that he was ‘twitching his ass’ when watching his side play the 4-4-2 formation, I have the same feeling watching 3-5-2 with Evans, Jones and Smalling at the back.

All was revealed when the starting line-up was announced. A strong line up that consisted of De Gea, keeping his place in goal over new boy Valdes , Valencia, Jones, Rojo and Blind at the back. Carrick, Di Maria, Fellaini and Januzaj in midfield with Falcao and Wilson up front. So the majority of the fans got their way.

A first start for Adnan Januzaj since the beginning of November. There were no places for captain Rooney and Mata in the squad, most likely being rested. Robin van Persie, Shaw and Herrera all started on the bench.

The first half kicked off with the sides playing with a pink ball which gave the match a comedy feel, little did I know how unfunny the match would turn out to be. As expected United started the tie looking to take control. However, it was Cambridge who won the first corner quickly followed by a free-kick. In both set pieces the home side pushed their big players up into United’s box, but on both occasions nobody could connect with the ball.

United’s first chance came in the 10th minute with good link up play between Blind and Januzaj down the left with the keeper Dunn saving from Blind’s effort. If Blind had crossed before shooting Falcao was in a superb position in the six yard area. From the resulting corner bafflement again as Phil Jones took responsibility as he had done against QPR, the result being a poor delivery. I really can’t understand what that is all about.

As expected Cambridge went heavy into the challenges especially in the middle of the park but to a man United’s players certainly didn’t shirk away from any of them especially Marcos Rojo who was putting in a solid display at the back.

United were struggling to get any momentum going, this wasn’t helped by the poor distribution from the back. The main culprit was Jones, who once again just didn’t play with any quality. Januzaj had a tame effort from inside the box after good work from Valencia down the right. Fellaini picked up the first yellow card of the match for a needless challenge after 26 minutes.

On the half hour mark the home side almost took the lead from a corner as a header from Coulson was just inches over the bar. What a let off for United as the defenders were standing around watching the ball. LvG’s bum must have been twitching uncontrollable. Cambridge player Donaldson looked very lively and was causing United a few headaches every time he had the ball at his feet.

Towards the end of the half Angel Di Maria managed a shot on target which the Keeper almost fumbled. That was it as regards chances.

The first half from United was extremely poor with a distinct lack of ideas across the pitch. Boring is not a word I would usually associate with the Red Devils, but that’s exactly what the first half was.

James Wilson hardly touched the ball in the whole 45 minutes and once again Phil Jones didn’t exactly fill anybody with confidence. Adnan Januzaj was once again flattering to deceive. The biggest problem was that Cambridge were well marshaled in defence and limited United to speculative shots from distance as well as nullifying the threat from midfield.

The second half got underway with no changes on both sides. Man United appeared after receiving an earful from van Gaal and you could tell as they started with a more positive look. They went on the attack with Januzaj at least starting to be more direct on the left by winning an early corner, which was once again taken by Jones, and once again came to nothing. I always believed when a player who was taking a corner raised his arms it meant the ball would be delivered deep into the danger area, obviously to Jones it means something completely different.

A couple of high balls into the Cambridge penalty area came to nothing as Falcao stood no chance in the aerial battles against the taller defenders. He did come very close to scoring when through on goal but his effort was well saved by Dunn.

Wilson’s first and last impact on the match was to be shown a yellow card shortly before being replaced by Robin van Persie after 66 minutes. At the same time Herrera came on in place of Fellaini. Could Herrera repeat his heroics of the last round against Yeovil?

Van Persie almost had an immediate impact after he came on with a left footed effort flashing over the bar. Since the two substitutes came into the match United picked up a gear with Herrera linking up with Valencia on the right, but their crosses into the danger area were poor.

For the final 15 minutes ex-United player Luke Chadwick made an appearance for the home side. Would he be able to write a fairy tale ending by scoring the goal to send his old team out and his hometown club through?

Herrera was definitely the busiest of the United players. He combined well with Di Maria to prise open the home defence with a delightful one-two, but again the defenders were up to the task and cleared. When Januzaj finally crossed a decent ball into the danger area there were no white shirts in the box. Phil Jones headed clear from a dangerous Cambridge cross in the six yard box, another let off for the visitors.

Louis van Gaal’s final change of the match came in the 85th minute with Luke Shaw coming on for Blind. Cambridge hero Dunn pulled of a double save from Januzaj and Di Maria as they tried their luck in the dying minutes. That was the last of the action as the match finished 0-0.

All credit to the home side for holding United to the draw, but I must admit this was probably the worst performance from the Red Devils this season and there have been a few. Cambridge fully deserved the draw and the money spinning replay at Old Trafford. They will earn an expected £1.5 million from the match. With that much revenue maybe their manager will allow his players to swap shirts with the United stars after the replay.

On the bright side United are still in the competition and should deal with Cambridge when they meet at Old Trafford. For me the problem is the style of play, or lack of it that is. I understand it was a difficult pitch and the size of the ground made the atmosphere more intense, but please with all the expensive talent on display United should have dispatched Cambridge with ease. No excuses.

Let’s be honest this is not the first match where the team has underperformed and not been beaten. There are cracks appearing in the manager’s philosophy that can’t be papered over any more. Those cracks are the players and as the transfer window is nearing it’s end something has to be done quickly. We nearly blew our only realistic chance of silverware at Abbey Road. Imagine four months of only playing for a top four finish.

Next up is the visit of Leicester City to Old Trafford in the Premier League. Time to dish out a little revenge after they defeated us 5-3 back in September. I’m hoping the team can put on a performance that will give me something positive to write about.