Back to the drawing board. 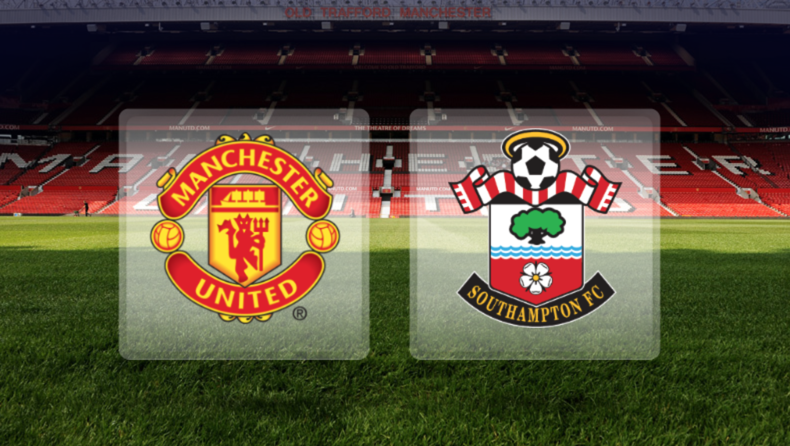 “Unbelievable!” was Louis van Gaal’s answer when asked about the injury situation in his pre-match press conference this week. An expression he could have used for the outcome of this match.

This was Southampton’s first win at Old Trafford in the league for 27 years, and only the second time United have been beaten at home this season. Sadly, it was the weak manner in which they lost against Southampton without even having a shot on goal that riled the most.

The first time the manager has had a fully fit squad to choose from in five months. That is apart from Ashley Young. On Friday in his press conference van Gaal seemed to enjoy the headache he would have in selecting a starting eleven. On Sunday evening he would have a headache for completely different reasons.

In the end he chose a Manchester United starting XI consisting of: De Gea, Valencia, Jones, Smalling, Shaw, Blind, Carrick, Rooney, Mata, Di Maria and Van Persie. To be used in his preferred 3-5-2 formation. There was no place for Falcao, who was not involved in the squad at all. Angel Di Maria was chosen to play alongside Robin van Persie in attack, clearly for his pace. Daley Blind was recalled to play with Smalling and Jones at the back.

It was no surprise to see Robin van Persie head the forward line as he has netted a total of six times against the Saints, while at United, including two goals in this reverse fixture in the win at St. Mary’s in December.

Angel Di Maria’s pace would be crucial in attack today, but after only playing a limited amount of minutes in the last month or so, the worry was whether he would last the pace.

All in all this United team seemed to be strong enough to get the three points and move closer to Man City who only drew on Saturday.

The opening to the first half saw Southampton enjoy the early exchanges, and in the first seconds Southampton’s Clyne had a chance when United’s defence didn’t react to a through pass, but luckily for United he pulled his shot wide.

From the fifth minute United took control and started to put some neat passes together. Di Maria floated a delightful ball across the box, unfortunately nobody reacted quickly enough to make any contact.

In the 14th minute Rooney chipped a pass to Mata who just couldn’t get past the last defender, but at least the chances were starting to develop. Rooney was controlling the play from his midfield role, spraying passes left and right and generally finding his men. One of those passes was intercepted by Alderweireld, but as he did he pulled up and had to be replaced. As the substitute was waiting to come on Di Maria tried his luck from the edge of the box but fired his effort wide.

Chris Smalling got it into his head at one point that he was a classy center back, and tried to dribble the ball out of defence only to lose it, then he lunged in on the Saints player. He was lucky to escape a booking. It’s mistakes like that which have proven costly for us this season. Likewise, Phil Jones kept joining the attack only to give the ball away when an easier choice was available.

On the half hour mark wing back Valencia went on a powerful run down the right, but he was matched for pace by the defender who managed to block the cross for a corner. Another Valencia run was illegally checked, and from the resulting free-kick Di Maria’s delivery was woeful. 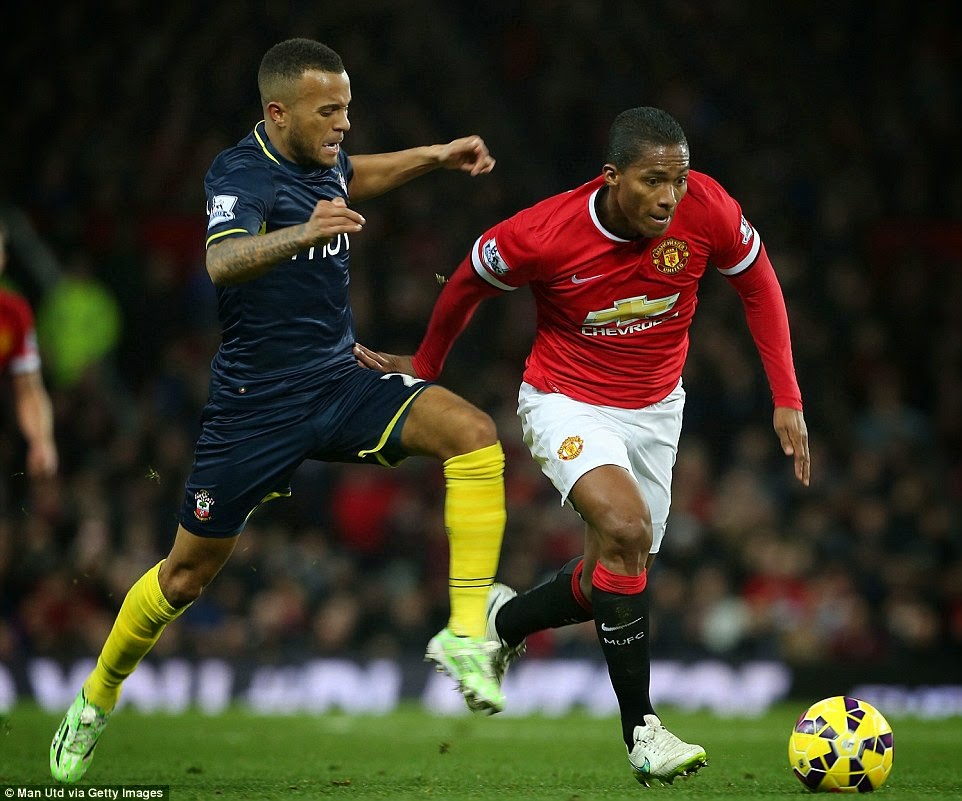 A great chance opened up when van Persie put Di Maria clear. However, the ball drifted a little too wide for a shot, so Di Maria attempted to pull it back across the box, but the keeper beat Mata to the ball. Chance gone. A second clear chance came when van Persie had a shot in the box which seemed to hit a defenders hand. Mata was busy protesting when he should have been busy challenging for the ball. Chance once again gone.

United were on top throughout the first half without scoring. Lots of half chances, but you did get the feeling that Southampton were more than capable of grabbing a goal. So United needed to turn up the heat in the second half and put this match to bed as quickly as possible.

The second half got under way with no changes for United, who were attacking the Stretford End. Again, as in the first half Southampton had a chance to open the scoring within seconds. On this occasion United defended well to put the ball out for a corner.

Di Maria showed the quality of his pace as he chased a speculative long ball from Valencia down the right channel. He managed to reach it but once again his pass to van Persie was poor. The match was the same at both ends, half chances for both sides, but each time the last ball was dreadful.

The match was crying out for somebody to get a grip of the game, take it by the scruff of the neck and produce a match winning performance.

United were starting to get things together down the left with Blind, Shaw and Di Maria causing headaches for the Southampton defence. Once again all the effort wasn’t being turned into any clear- cut openings. Frustration was beginning to be felt around the stadium, and out on the pitch as van Persie needlessly picked up a yellow card.

After an hour of play Ander Herrera replaced Robin van Persie, which meant Rooney was moved back up front as the main striker, and in turn Herrera took over the captains midfield role. Straight away Rooney had a chance but failed to get his head to a cross.

The second substitution came within a few minutes of the first as Shaw was taken off. Clearly still feeling a knock from an earlier defensive interception. Tyler Blackett came on in his place.

United continued to probe away but Southampton were proving a tough nut to crack. Then in the 69th minute the Saints cracked United. After hitting the post the ball rebounded out to Dusan Tadic. He in turn slotted home the opener through a penalty area strewn with five United defenders. Once again second-rate defending from United. 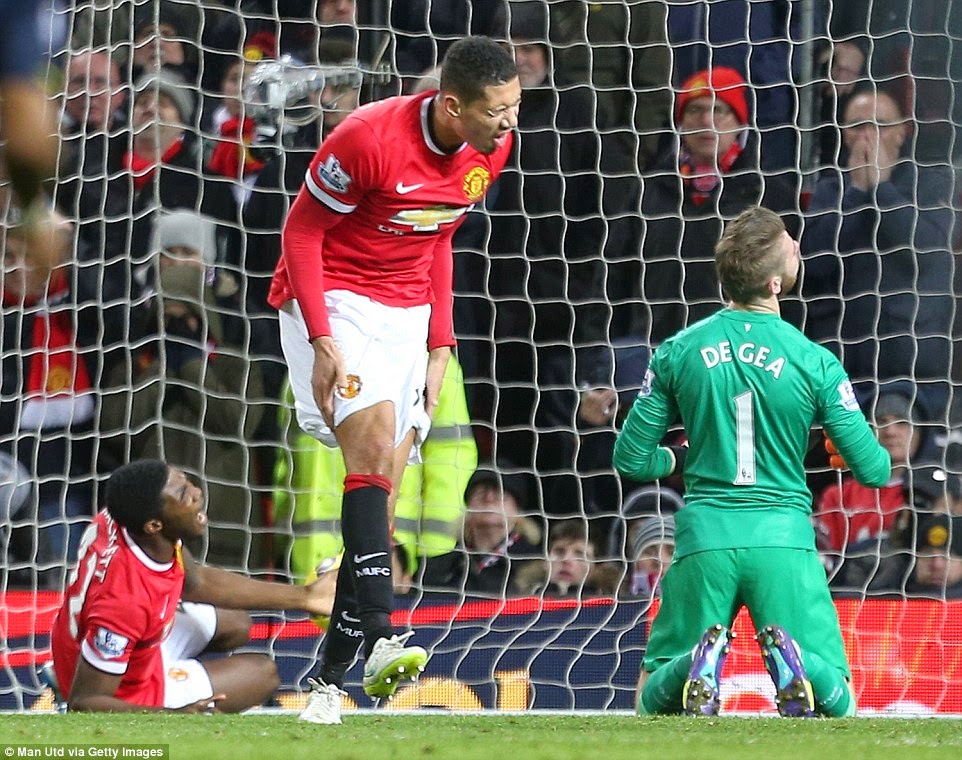 The last throw of the dice from van Gaal saw Fellaini come on for the ineffective Di Maria, for the last twenty minutes, a sentence I never thought I would ever write.

The dismal mood of the day was summed up on 76 minutes when Michael Carrick was booked for a professional foul that halted an attack by Southampton.

Mata went the closest three times in the last twenty minutes. First he had a shot across the area which traveled wide of the far post, then the Spaniard put a close range effort over the bar, lastly he attempted a drive, which was deflected for a corner. It clearly was not going to be United’s day.

When the fourth official held up 5 minutes of extra time you just didn’t get that feeling of excitement from knowing United always grabbed a goal at the death. So bad was this display you felt that it gave Southampton time to add a second on the break.

In the end this result was a huge disappointment. A loss that dents any dreams of United winning the league. This was a very poor showing bearing in mind United were back to full strength, and with the attacking quality we had on display, not to manage one shot on goal is just unacceptable. 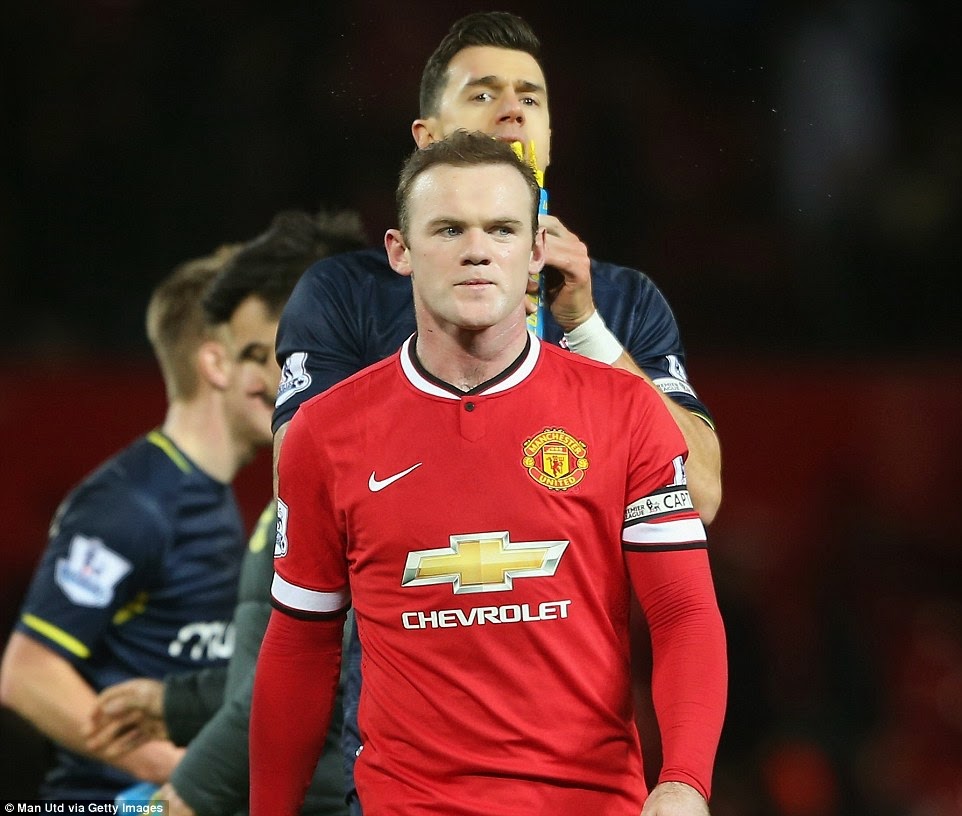 Falling to our first defeat in 12 matches the team needs to pick themselves up and start again on a run to cement a top four position. United’s next 7 premier league matches are against QPR(a), Leicester(h), WHU(a), Burnley(h), Swansea(a), Sunderland(h) and Newcastle(a). Matches that before today’s debacle seemed to hold no worries, but now take on a feeling of uncertainty.

As I’ve mentioned in past articles, our best chance of silverware has to be the FA Cup. Next up is another tricky away fixture at Cambridge United. Similar in size to Yeovil Town with a stadium of the same capacity this will not be easy, but definitely winnable.

Lastly, a big United welcome to Victor Valdes who officially joined the Red Devils this week. Now all United need to do is get David de Gea to sign a new contract and we will have a couple of World class keepers on the books. Sadly, it probably spells the end for Anders Lindegaard, if so, I hope he finds a team and gets the playing time he deserves.

Until next time thanks as always for reading.