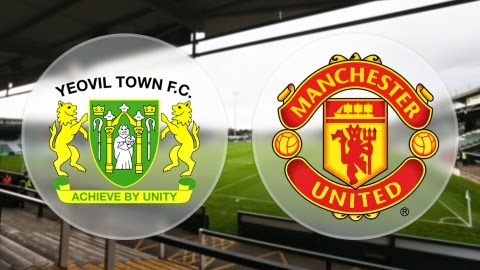 The last time Manchester United won the oldest cup competition in world football was back in 2004. On that day only one player from the present United squad collected a winners medal, Darren Fletcher. Other players in the side have won it with other teams including Robin van Persie (Arsenal 2005 vs Man Utd) and Juan Mata (Chelsea 2012)

So, for most of the players facing Yeovil Town today this was new territory. A walk around the museum at Old Trafford would enlighten the players as to how United hold this cup close to their hearts. Sharing the record with Arsenal of 11 wins. Sure the Champions League has taken over as the most prestigious cup competition in football, but there is something special about the FA cup that will never die.

The romance of the competition continued this season as United were picked to play away at Yeovil Town from League 1. David versus Goliath.  However, on this occasion David failed to defeat the giant that is Man United.

The last time these two teams met was also in the FA Cup in 1949. The match was played at Maine Road, Man City’s old stadium, as Old Trafford was still undergoing refurbishment after the WWII bombings. United won comfortably 8-0 with Jack Rowley scoring five in front of over 81,000 spectators.

The team news showed that Louis van Gaal was taking the match seriously. DeGea, Smalling, McNair, Blackett, Rafael, Fletcher, Herrera, Rooney, Shaw, Wilson and Falcao. A strong side with Di Maria and Mata on the bench.  James Wilson was chosen ahead of van Persie to lead the attack alongside Falcao. Rooney continued his stint in midfield alongside Fletcher. Michael Carrick was given a well earned rest.

Yeovil spent the first 10 minutes trying to bully the United players and remind them that this was an FA cup tie. De Gea was clattered in the first seconds and Luke Shaw took a blow to the head as did Rafael. This was starting out to be a bruising affair. United’s first effort came from McNair who tried his luck from outside the area but skyed his shot high.

There were 2,025 United away fans, out of around 9,000 in total, crammed into the small ground, who were continually singing and trying to spur the team on. Unfortunately to little effect.
As usual this season, United took their time getting into any sort of rhythm. After 14 minutes Rooney did try a curler but misjudged his shot after nice interplay with Wilson. Chris Smalling spent the first quarter of an hour trying to set a record of hoofing the ball out of the ground.

Yeovil’s plan was to put high balls into the United area knowing how poorly United’s defence have performed this season. A succession of Yeovil corners gave the Red Devils a few headaches, literally for McNair after a nasty clash of heads with Yeovil’s Moore, but generally they defended them well, even Falcao came back to help out. McNair needed treatment to his head wound which included staples to close the cut.

This was turning out to be a real cup tie with the United defence gifting corners, Herrera and Fletcher made some errant passes, and the side were not creating anything in the attacking third. Darren Fletcher wasn’t keen to get stuck in and his passing was that of a man who knows his career is coming to an end. Blackett was showning no urgency in his play strolling around the defence. Generally the first 30 minutes was poor from United.

Just afer the half hour Herrera played a great ball to Wilson, who should have done better with his effort. His poor shot summed up the start for United. This was confounded a few minutes before half time when Herrera himself had a woeful effort well wide of the goal.

A first half that lacked conviction from Man United. Again performing poorly away from home and making the bottom of the League 1 side look better than they are. Careless passing from the midfielders mixed with poor concentration, and again no confidence in the defence. At no point did United force the Yeovil keeper, Steer, into a save. This was an embarrasing 45 minutes in which United looked more intimidated than the home side.

Changes would have to be made at half time by van Gaal or it could turn out to be another MK Dons nightmare. The substitutions were made at the beginning of the second half, not for tactical reasons, but as we would find out after the match due to even more injuries.

Juan Mata and Jonny Evans replaced the wing backs Shaw and Rafael. This means that in one week we have lost four players who play in those positions: Young and Valencia and now Shaw and Rafael. A nightmare scenerio.

The first job Evans had to do was to clear his lines after a Yeovil cross into the box. Again rather shaky defending gave Yeovil the impetus to attack. Their forward Moore had a great chance to put the hosts in the lead, but luckily for United fluffed his shot by underhitting it straight to a grateful David de Gea, by far the best chance of the match after 55 minutes.

Another change was made by van Gaal on 58 minutes. Enter Angel di Maria for Radamel Falcao. Falcao had had a tough time and didn’t really have any chances. United needed pace up front as the Yeovil players understandably started to tire and they would have trouble keeping up with the pace of di Maria and Wilson. 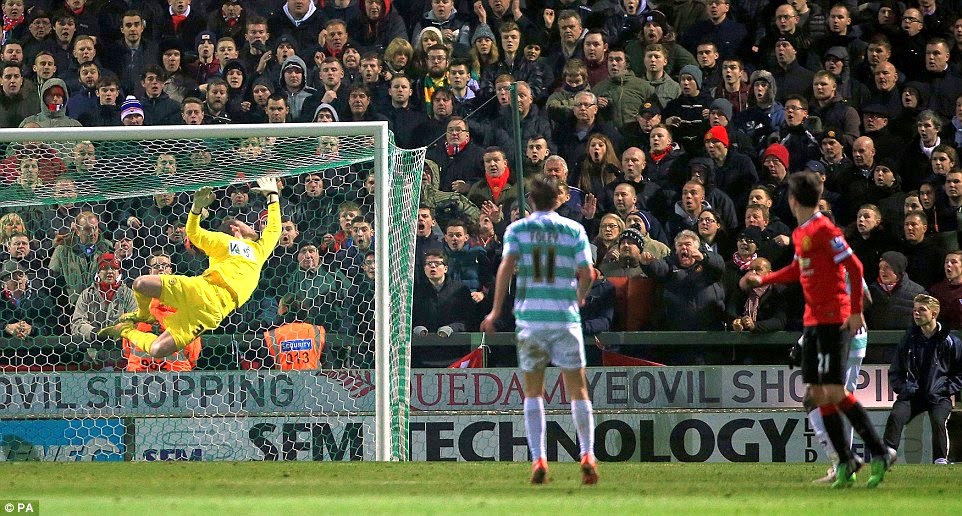 Then in the 64th minute Herrera scored a wonderful goal. Rooney started the move by squaring the ball to Fletcher, who in turn nearly lost possession, but the ball came to Herrera prowling on the edge of the area, with his back to goal he turned and hit a delightful shot into the top corner from 20 yards, a brilliant strike and exactly what United needed to relax. The one downside was that Herrera was booked for over celebrating with the away fans.

The goal seemed to give United the lift they needed. Rooney fired a free kick just over. At the other end di Maria cleared an effort off the line following a Yeovil corner. It was all for one as United hung on for the win.

On 75 minutes Rooney had another chance from a McNair cross, but couldn’t do much with it. Di Maria also tried his luck from way outside the area but pulled the ball well wide of the goal.

Angel di Maria finally settled the tie in injury time, The Argentinian added the second as he raced onto a through ball and gave the keeper no chance when one on one by chipping a shot into the net. Breaking brave Yeovil’s hearts.

United were playing against a side 60 odd places below them in the league, but all credit to Yeovil for a gritty and valliant effort. In no way did they let themselves or their club down. It was definitely not a walk in the park for van Gaal’s men.

On the way back to Manchester Louis van Gaal has to convince the directors to give their rubber stamp on any new player, or players, he requires. Quite clearly some more new additions are needed if United want to move forward in 2015. Time and again I’ve said that our defence is a shambles, I understand we didn’t concede today and are now unbeaen in 11 matches, but some of our players out there were so very ordinary.

It was another disaster on the injury front with a possible fractured cheekbone for Rafael and an ankle injury to Luke Shaw. This is why they were both replaced at half-time. Both players having only returned in the last week after lengthy spells on the sidelines. I can’t remember a season that’s been as bad as this one for injuries. I hate using the word unlucky, but it is just that.

The positive from today is that we are in the draw for the 4th round tomorrow. The way our away form has been lately I’m praying for a home tie.

Next week it’s back to the Premier League as United welcome Southampton to Old Trafford. Who knows, by the time we next play we could have some new players on the books. God knows with the injury list and unconvincing performances from some players we need them.