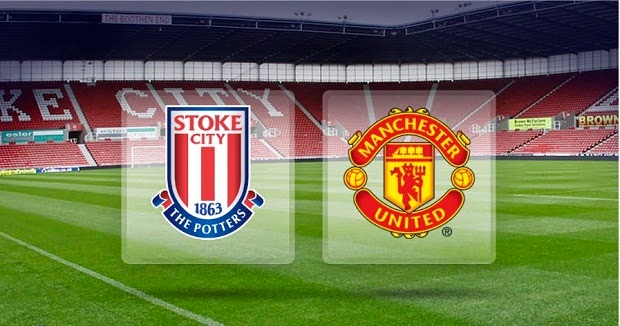 Man United started the New Year as they had ended the last one by only managing a draw away from home.

The last time we visited the Potteries was a 1-2 loss back in February. How times have changed. New manager and new players, third in the league and unbeaten in the last nine games. Things were definitely looking up for the Red Devils as we entered 2015.

The Britannia Stadium has always been a tricky place to get results and today was no different, as the wind blew across the pitch making high balls hard to defend. Former United favourite Mark Hughes had the extra height of Peter Crouch in attack to cause havoc with the ball in the air. This was going to be a real test for United’s defenders

When the team was announced I cringed at the thought of Smalling, Jones and Evans together at the back, as something usually goes wrong, and after only 1 minute 45 seconds it did just that.

From a corner Crouch, unchecked in the box, rose to head towards goal, it was smacked into the net by Shawcross. The worst possible start for United as the defenders were found napping in the box. Van Gaal had said before the match that he wanted his players to dream of matches beforehand, here they were actually sleeping during play.

United must have known about the threat Stoke posed from set pieces, why they had so many players in the box doing nothing was totally unacceptable. I guarantee van Gaal, the perfectionist, was seething on the touchline that his side had conceded such an early goal in that manner.

It took 8 mins for United to win their first corner, but the delivery by Mata was not good enough, and Begovic collected easily. The second corner from Mata had exactly the same result. He again took the responsibility to take the third corner, which again was poor.

When you have an opposition keeper as tall as Begovic, what is the point of lofting crosses into the box that he’s going to eat up all day. I remember a time when Robin van Persie was taking the corners on the right in his first season with better results.

The uneasiness in the United side was summed up on the quarter hour by an over hit pass down the wing from Young which was meant for Falcao. Young is best suited playing on the left as has been proved with this match and the away match at Villa. he is quite simply wasted on the right.

United won a free kick on the edge of the Stoke area which Rooney took control of, but his effort was high and and not so handsome. You began to get that feeling it clearly was going to be one of those unfortunate days. Not much was going right for the team in blue. 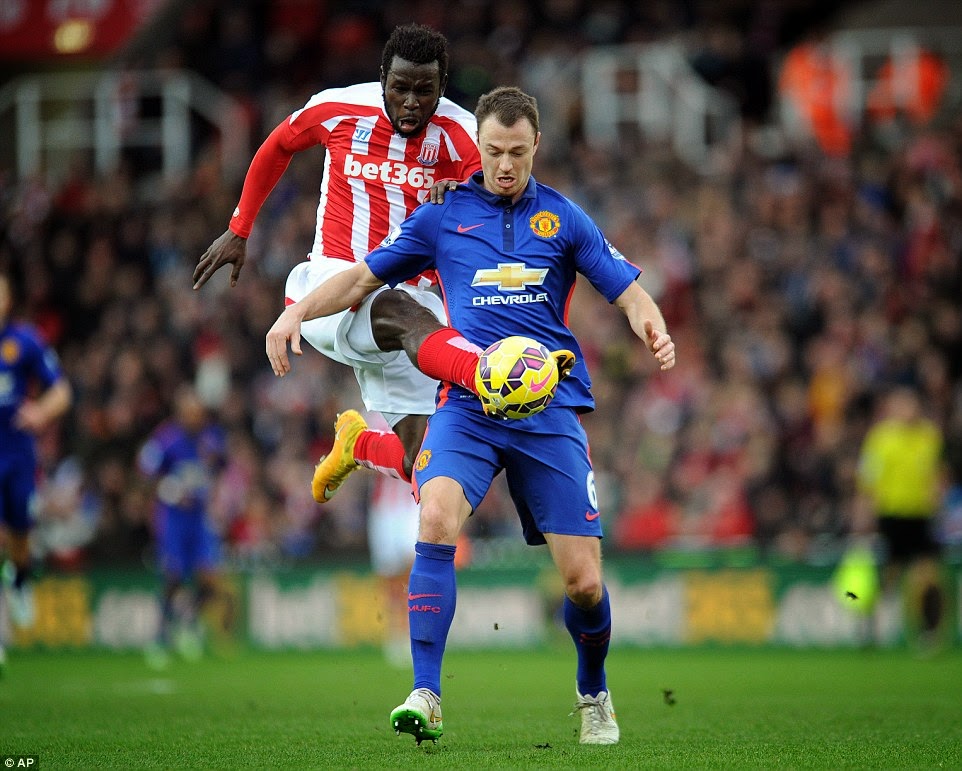 The first mistake from Evans was on 18 minutes. He was out hustled and bustled off the ball by former red Diouf. Luckilly for Evans, Diouf pulled his effort wide when he should have done a lot better. Maybe David de Gea’s performances made him panic into shooting too early. That was big let off for Evans and the team. This is not the first time Evans has put the team in danger this season, and I have to question his reliability.

United’s equaliser came in the 26th minute when a Rooney corner from the left was heade on by Carrick’s through to Falcao, who swept the ball into the net. A goal from nothing but welcome all the same. That was Falcao’s third goal for United, and it came at a perfect time in the game.

After the goal United started to take control of the game more. The only real threat from Stoke came from the height of Crouch, and that unforgiving wind. Stoke had a slight chance as an inswinger from their left confused all in the penalty area until Shaw miskicked the ball over the crossbar for a corner.

The Stoke keeper Begovic angered van Persie by showing his studs as he kicked out his leg in the Dutchman’s direction. Van Persie was rightly incensed, but the referee Michael Oliver and his assistant didn’t see what happened. On closer inspection Begovic was lucky he didn’t make contact with the forward or it could have been very nasty indeed.

The away fans were in fine voice out singing the home fans who had long given up booing United’s every touch of the ball.The first half ended all square at 1-1.

The second half got under way with no changes in the United side. With Young still on the right and Shaw on the left you got the feeling that United were going to struggle to create chances. Stoke were closing down quickly and our midfield trio of Carrick, Rooney and Mata failed to stamp their authority on the game. Poor passing and dwelling too long on the ball gave Stoke a self belief, and they started to play the better football.

United had a look of uncertainty about their play and really needed to have a spell of keeping the ball, but Stoke were not giving them any time to settle into a rhythm. Just after the hour mark, van Gaal made a double change. Bringing on Ander Herrera and Adnan Januzaj for Falcao and Shaw. I totally understood the confused way Falcao looked as he was substituted. Not sure why he was the fall guy when others around him were just as equally under performing.

There was a moment of controversy after Jones had headed behind from a Stoke cross. From the resulting corner the ball struck Smalling on the arm, as the home fans screamed for a penalty the ref waved play on. A minute later the same thing happened to Smalling again, once more Michael Oliver angered the locals by showing no interest in their claims for a penalty.

From the resulting clearance, United  broke down the left only for Januzaj opting to shoot when a cross would have been the wiser choice. Shortly after, van Persie nearly managed to convert a lobbed shot, but sadly for him pulled it wide.

Crouch was causing all sorts of problems for United. In a two minute spell Stoke hit the post and Diouf had a blast from the edge of the box, which only just flew over the crossbar. 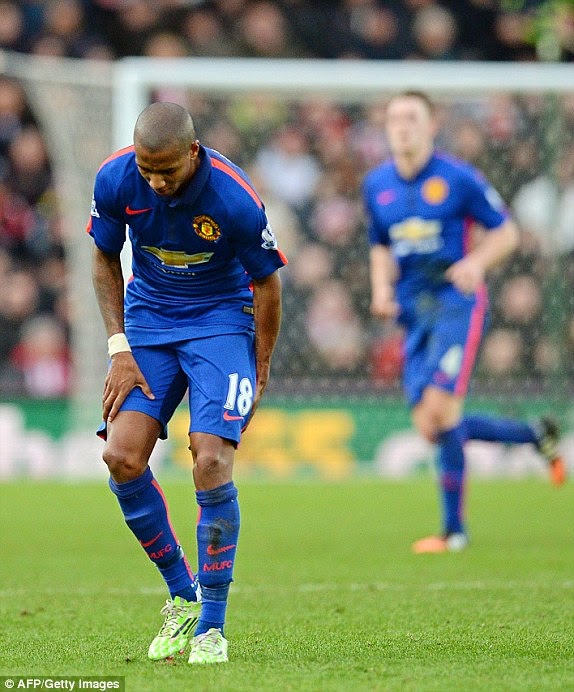 This was proving to be a tough New Years Day for the visitors. There was no urgency in our play and no chances were being created. Then, as Young galloped away on a counter attack, he pulled up sharply with what looked to be a hamstring problem. This meant that Rafael made it on in Young’s place. Another injury to add to the list.

In the last 20 mins United had their own appeal for a penalty waved away, when Rafael looked as if he had been impeded. Maybe the referee was addressing the balance. When Januzaj did deliver a cross from the left, van Persie just couldn’t quite convert it at the near post.

United finished the match on the attack with a flurry of corners and crosses, which in the end didn’t result in any clear cut chances to grab a winner. It ended all square. Our poor performance made Stoke look the better side in the second half.

This was not the type of start to 2015 that everyone expected from Manchester United. It meant that van Gaal was still waiting for his ‘perfect’ match. From the look of things it will be a long time before he gets it. The side were short of ideas and lacked the balance from the last few weeks.

Valencia was missed today, as when he and Young played out wide there was a cohesion in the side. Now that Young and Valencia will be missing for the foreseeable future the need for other players to return is imperative. We desperately need Di Maria and Blind to make a speedy return and start winning again. On a positive note, United are now unbeaten in the last ten games.

The transfer window opens this weekend and as I’ve said many times this season the defence is our biggest problem area. We desperately need someone at the back with the experience to bring stability. How many points have been dropped by our inept defenders? To say that Smalling was the best defender on show today doesn’t exactly fill me with confidence. Smalling, Jones and Evans are our own ‘Bermuda Triangle’ as strange things happen when their together. 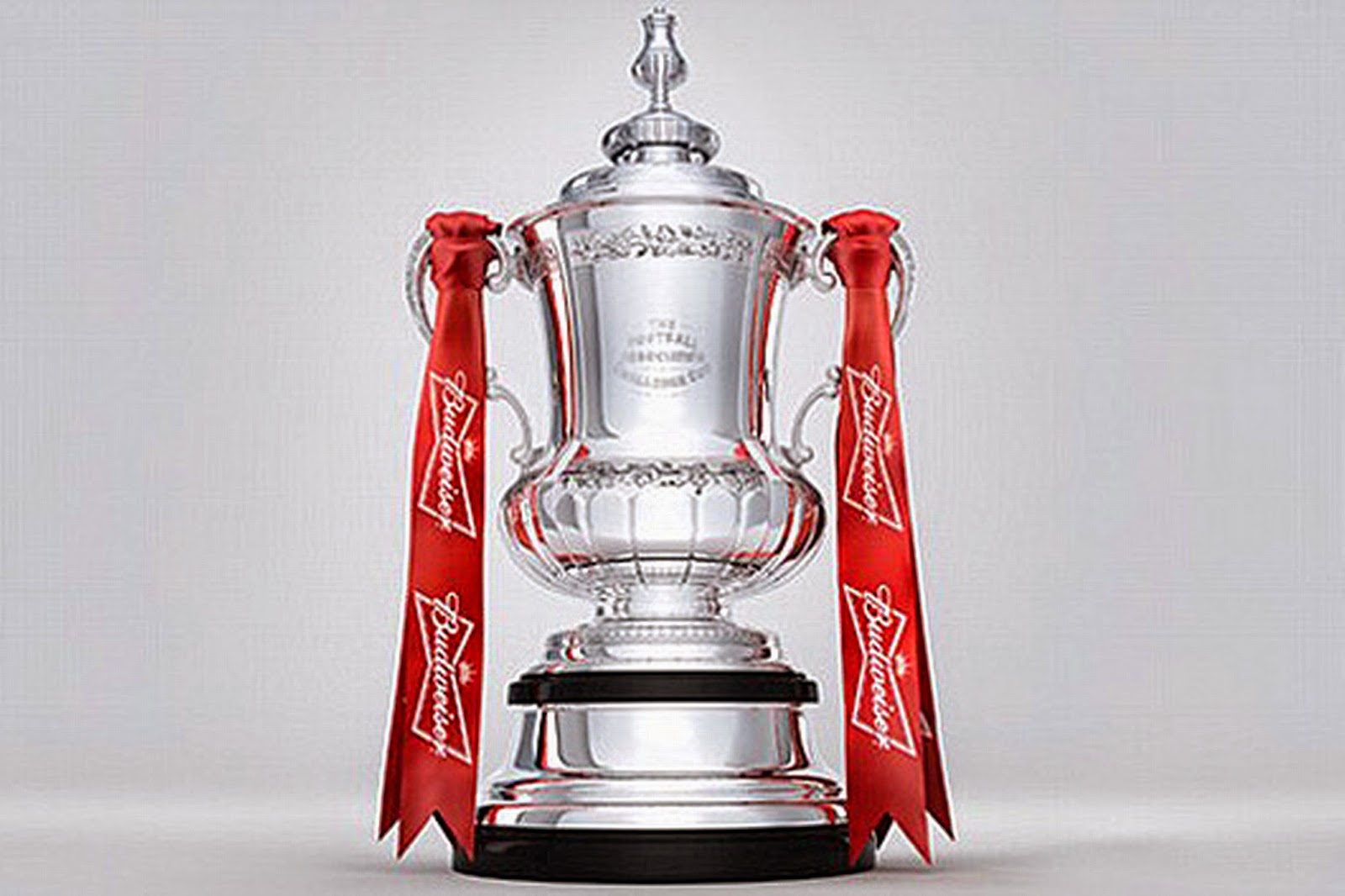 Next up for United is the 3rd of the FA Cup in which they will face League 1 outfit Yeovil Town. The main hope is that van Gaal approaches the match differently to the loss against MK Dons back at the start of the season. I’m hoping for a good cup run as it could be our only realistic chance of silverware this season. The last time we lifted the old trophy was back in 2004, so it’s well overdue.

United have faced Yeovil twice before, both matches in the FA Cup. The first was at Old Trafford in the 1937-38 season in the 3rd round that was won by United 3-0. The second match was in the 1948-49 season. This time it was in the 5th round. United played the match at Manchester City’s ground, Maine Road. United netted 8 goals without reply. Incredibly the attendance that day was 81,565, amazing.

The first match of 2015 has ended rather disappointingly, but there is still a lot to look forward to, I’m sure.

Thanks for checking out my thoughts.