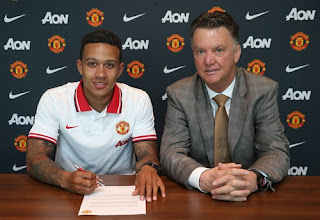 After what has seemed like an age Memphis Depay has finally put pen to paper and signed for Manchester United.

He is one of the hottest if not the hottest young talents in European football, a player that has been sought after by a host of top clubs all over the continent.

He seems to be the type of player ideally suited to the United way. He’s young, talented and not short of confidence as he is quick to tell everyone exactly how good he is.

But who is the player that Louis van Gaal agreed to sign before the transfer window even opened in order to beat off the advances of PSG?

Memphis was born on the 13th of February in 1994 in Moordrecht, Netherlands. His father is Ghanaian and his mother is Dutch. His parents separated when he was only four years old so he uses the name Memphis rather than his surname.

At the age of nine Memphis played for Sparta Rotterdam, then came the chance to move to a bigger club three years later in 2006. That club was PSV Eindhoven and he spent time working his way up through their system until he finally made his first team debut in September 2011. It was a Dutch cup match and the opponents were amateurs but all the same he marked his debut by scoring a double.

Memphis had to wait a little while longer to make his league debut which came in February 2012 when PSV beat rivals Feyenoord 3-2 at home.

At the end of the season, Memphis featured in the KNVB Cup final on 8 April 2012 which PSV won 3-0 against Heracles Almelo. Although not on the scoresheet Memphis had done enough to warrant a professional contract which he signed on the 29th of June 2012. It was a long-term contract that would keep him at PSV until 2017.

The following season proved to be his breakthrough season and one in which people took notice of this young Dutch talent. It was also the season that he broke into The Netherlands senior squad making his first full appearance in 2013 which would eventually lead onto the 2014 World Cup Finals in Brazil. Of course, the national team was coached by the future Manchester United manager Louis van Gaal.

In the 2013/14 season, Memphis made his European debut for his club and although PSV didn’t end up qualifying for the group stages he had shown Europe a glimpse of his immense talents. For example, in their second group stage match in the Europa League, Memphis scored a stunning goal by curling the ball into the net from outside the area as PSV beat Chornomorets Odesa 2–0.

After a very successful 2014 World Cup, Memphis was linked to a number of clubs, including Manchester United. However, he stayed at PSV and for them thank heavens he did. His goal tally of 22 went a long way to securing the 22nd Dutch Championship for his club.

In was in the last month of the season that both PSV and Manchester United announced that they had reached an agreement with the player to move from Holand to England. The transfer would be official on June 1st. It was then that Louis van Gaal informed everybody the reasons behind pushing through the agreement. Memphis was hot property and someone had to make a move and quickly.

The player enjoyed an emotional farewell in front of his adoring PSV fans as he signed off with one of his trademark long-distance free kicks. A fitting way to end his career at the club. 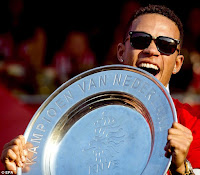 Once the dust had settled Memphis spoke of his desire to play in the English Premier league and that it was his dream to play at Manchester United. He also cited the huge influence and no doubt the Dutch connection of Louis van Gaal behind his decision.

So what is in store for the United faithful next season? Well, Memphis is a speedy winger who enjoys taking on defenders and is certainly no lightweight, comfortable on the ball with both feet and of course as he has shown he has an eye for the goal, especially with free kicks. He has excelled in recent internationals for Holland including unwittingly scoring a goal with his face against the USA.

At 21, he has a long career ahead of him and I am sure that he will build on his undoubtable talent under the guidance of Louis van Gaal and go on to have a bright future at Old Trafford and help the club to get back to winning trophies.

He left Holland as a champion let’s hope he ends his first season at United the same way.