United Need to Toughen Up! 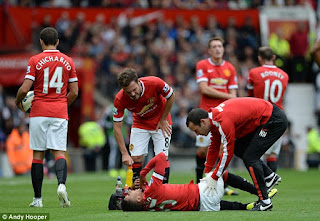 Following United’s top four finish to the season it is critical that Louis van Gaal and his backroom staff strive to solve the injury problems that blighted last season as next season’s campaign will put a heavier burden on the players with the Champions League returning to Old Trafford.

It was well documented throughout last term the problems that United had with injuries, but it also highlighted the lack off strength in depth within the squad. Louis van Gaal has been on record saying that he would like to have two players for each position which is all well and good if those two players aren’t sidelined at the same time.

Let’s take a look at some facts from last season. United’s squad suffered the most injuries of any other team in the Premier League with around 70 injuries compared to the champions Chelsea who had around 45. At one point in the season, United had a total of 10 first-team players sidelined through injury. These statistics had a strong bearing on the side’s season.

What is the reason so many players suffered with some kind of injury last season? It can’t be all be put down to bad luck. Could it be that the training regime van Gaal introduced took the United old-guard by surprise after the less stringent Moyes system and one that the new signings were also not used to at their previous clubs where they had it a lot easier.

Upon arriving at Carrington after a successful World Cup the new manager looked at his squad on the USA tour and quickly decided, for example, that Luke Shaw was nowhere near match fit and didn’t include him until absolutely necessary and it became clear why as Shaw was United’s most injured player last term, sustaining at least seven setbacks since his move from Southampton.

Michael Carrick started the season late but ended it early and his absence had a negative effect on the team as did that of a number of other casualties including Blind, Rojo, van Persie and Di Maria all missing at differing and vital times during the season.

As regards Angel Di Maria, he seemed to be affected by every knock he received during a game but I wonder how much of that was psychological.

I understand that modern players’ bodies are not built for the rough and tough style of play England is known for but having said that, they are fitter than players in the past so the recovery time is quicker these days. The manager never likes to rush players back into the side following an injury lay-off as he always speaks about the fact that players need the time to recover not only from the problem but also to regain their fitness, which makes sense if the squad was big enough to handle any absentees.

At the beginning of his debut season van Gaal had to cater for players that had been involved in a long hot World Cup Final tournament in Brazil, I’m not including the England players here. The likes of van Persie and Blind both of whom laboured towards the end of the season, Di Maria and his teammate Rojo who when played gave his all but also suffered for that gung-ho spirit of his.

The only player from the World Cup who didn’t have a problem was Fellaini but I put that down to him starting the season later than most, his first start came in October, and his style of play is that he dishes it out more than he gets.

It’s no surprise that the players who were not heavily used in the World Cup, if at all, lasted well into the season. For example De Gea, Herrera, Mata, Smalling and Young.

Falcao was signed on loan but after his well-publicised knee operation he was nowhere near the player he once was and looked decidedly off the pace in the matches he was involved in.

The Premier League is the most demanding in the world and puts a lot of stress on the bodies of the players add to that the new signings who arrived from leagues that are a lot less formidable than the English Premier League then of course it would have been a minor miracle if they all had remained match fit all season.

With no major tournament this summer and a shortened pre-season tour to the USA, Louis van Gaal has a great chance to get his players to the peak of fitness and at the same time adding valuable new blood to the squad ready for the demands of the busy season ahead.

United are blessed with the best training facilities money can buy and you never hear of players complaining about the training sessions at Carrington.

So, in the end, let’s put the last twelve months down to a bedding in process for all players and staff involved and one that should provide the springboard for success to return to this great club. Providing, of course, the players remain fit!