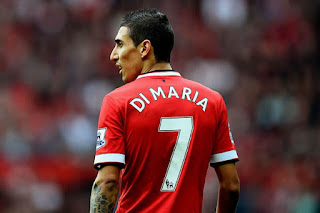 He came, He saw, but He didn’t conquer. Hopes were high last summer when it was announced that Louis van Gaal had secured the services of Angel Di Maria from Real Madrid for a record fee of close to £60m.

The news got all the fans excited in anticipation of what the Argentinian would bring to the team. Fast forward 12 months and all that hype and promise has turned sour as United have offloaded the star to Paris Saint- Germain at a loss of around £15m.

So what went wrong? Why did Di Maria turn out to be an expensive flop like his fellow countryman Juan Veron?

There are a number of contributing factors, but many will point to the fact that van Gaal didn’t exactly know which position best suited Di Maria or whenever he did play the team seemed disjointed and performed better when he wasn’t included. Or maybe it was a case of the player’s head and heart was just not in Manchester and when the going got tough he decided to hightail it away to pastures easier and new.

It had all started so brightly for Angel when he made his United debut at Turf Moor against Burnley in front of just under 22,000 fans packed into a small stadium a million miles away from what he had been used to at the Bernabeu. The match ended all square at 0-0, but Di Maria showed glimpses of what the fans could expect.

Next up was Queens Park Rangers and a chance for Di Maria to show the Old Trafford faithful exactly what all the money had been spent on. He delivered on all the hype and scored the first in a 4-0 win. Everything was going to plan and the fans had surely found a new hero to wear the famous No.7 shirt.

Then came a match away at Leicester City in which he scored an early contender for goal of the season by collecting a pass and upon entering the penalty area delivered an exquisite chip over red legend Peter Schmeichel’s son Kasper in the Foxes net, but at the end of that match, United had inexplicably given away a 3-1 lead and lost 3-5.

His next goal came in the home match against Everton in October which United won 2-0 with another of the summer signings Falcao grabbing the other, but the match would belong to David De Gea who performed heroics in goal that day.

Di Maria remained an ever-present in the side until United beat Hull City at the end of November then he was hit by an injury that made him unavailable until he was named as a substitute one month in the draw away at Aston Villa.

He missed all the Christmas fixtures, but did come back as a substitute in the 3rd round of the FA Cup away at lowly Yeovil Town in which he scored a late goal to wrap the game up 2-0.

Di Maria went on to start in the next 12 games which included a mixed bag of results, losing at home to Southampton and Swansea in the league plus being knocked out of the FA Cup by Arsenal at Old Trafford.

During that period it was revealed by the club that Di Maria and his family had had the scare of a home invasion earlier in the season which must have been all the more terrifying as they were in the house at the time. This clearly had an effect on him as he had to uproot his family and move into a hotel.

From March onwards Di Maria hardly featured in the side and if he did it was usually alongside Falcao on the bench as an unused substitute. When he did make it onto the pitch it usually only lasted a few minutes with an injury forcing him to leave the field.

It was clear to many that something was not right with the Argentinian as when he did play he just didn’t seem that interested or focused. The rumours of a rift between him and van Gaal started to do the rounds in the media leading to speculation that all was not well.

In his first and last campaign at United he made 32 appearances, 8 as a substitute and scored 4 goals and he also held the record for the most assists, 11, in the team.

At the end of the season the news grew of an interest from French outfit PSG but while on Copa America duty Di Maria promised the United faithful that he would return to Manchester and prove himself in his second season. However, the situation turned sour when he failed to report for pre-season training with the squad on tour in America on July 25th.

That turned out to be the last straw for van Gaal and the club and the decision was made to cash in on the player for as much as they could get from PSG, which turned out to be a reported £44m.

Angel Di Maria has an undoubted talent, of that there is no question, but he is a player who will be discussed by many fans who that feel let down and they will debate the how’s and why’s of his fall from grace as a Red Devil.

It proves that even the best players can find it difficult in the Premier League compared to other less competitive leagues. One thing is for sure Di Maria wasn’t the first and will not be the last to be found out.