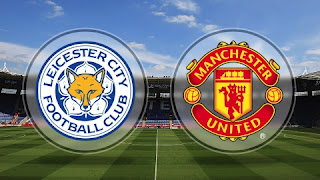 Who would have thought at the start of the season that United would be playing Leicester City for the top spot in the Premier League at the end of November, but here they were.

It was a day that a long standing record was broken and that was when Bastian Schweinsteiger became the first German player to score for Manchester United.

Following the failure to score and, therefore, guarantee qualification from their group against PSV it promised to be a tough match against lead leaders Leicester especially when you consider the latest players to join the injured on the sidelines. Lingard’s hamstring and Rojo’s unspecified problem meant that once again United was left short-handed going into battle.

LvG gave his backing to Rooney in his press conference stating that he had faith in his captain to come good, however the more he drops deep the less effective the team becomes and after the numerous 0-0 draws this season we need him in the attack or not at all.

Carrick made a welcome return from injury to replace Schneiderlin in the middle, Mata started for the injured Lingard and McNair was handed a rare start in defence in place of Rojo. Memphis would have to accept a place on the bench once again alongside two academy players Borthwick-Jackson and Rashford.

United’s team sheet indicated that van Gaal would revert to his favoured 3-5-2 formation with Young and Darmian occupying the wing back roles and that is how the away side began the match on a wet night in the East Midlands.

It was an open start to the game as both sides tried to get a feel for each other and it wasn’t until the 7th minute that United got behind the home defence as Darmian won the first corner.

A change of tactics at corners has been noticeable as the team seems to have dispensed with the short pass and at last started to deliver the ball into the danger area where the most damage can be afflicted.

A gasp rang around the stadium following a mistake by Carrick that allowed Vardy a run on goal but all he could manage was to win a corner.

Young collected the first booking of the game on the quarter hour as he brought down Mahrez in the centre circle. Then Young tried to make amends with a nicely constructed break for United that ended when he delivered an overhit cross from the left, which was clearly aimed at Fellaini, problem was the Belgian was sat on the bench.

It was Martial’s turn to try and open the defence when he squared for Schweinsteiger whose effort was deflected from danger.

Records are there to broken and so it came to pass as Vardy collected a defence-splitting ball in the 24th minute and whipped a shot across De Gea’s goal to put the Foxes in the lead. That would be the first and last shot on goal for Vardy but quality finishers only need the one chance.

The goal came from a break following a United corner and it caught the defenders totally wrong-footed as they struggled to cope with the speed of Vardy.

The question was how United would react. The answer was poorly as their passing was awful and thus provided Leicester with the impetus to attack and if not for De Gea it would have been even worse as he produced a wonderful save from Okazaki.

Darmian and McNair were having a dreadful time of it at the back as they struggled to contain Vardy and Mahrez.

Martial had another of his typical twisty runs on the byline and fully deserved more than the corner he won. When the ball was delivered Rooney must have wished a hole would have opened up as he totally misjudged his header which he directed into the ground. Summed up his season.

De Gea and Vardy exchanged angry words as the forward caught the keeper late as he collected a through ball, but true to form the English darling received no word of warning from the referee.

United ended the half on the front foot and were rewarded in the first minute of injury time when Schweinsteiger got his head on a well- delivered corner from Blind to not only score his first goal for the club but to drag United back into the match at the perfect time.

The determination the midfielder showed to even get anywhere near the ball was immense as he was almost wrestled to the ground by his marker.

At the break it was 1-1 and it has to be said the away side struggled yet again with the three at the back system which gave the home side the belief that every time they attacked they had a chance. 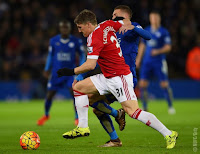 However, what a time for Schweinsteiger to score and hopefully that would provide the stimulation his side needed for the next important forty-five minutes.

Van Gaal made no changes at the start of the second half and it was the scorer Schweinsteiger who went close to adding a second as he met a Young free-kick with a thundering header that Schmeichel saved with a reflex stop that his dad would have been proud of.

The German’s goal on the stroke of half-time clearly had the desired effect as United looked the side most likely to get the breakthrough.

Leicester had offered nothing since scoring and you got the feeling that they were there for the taking if only United would press more on their defenders and deliver quality balls for Rooney and Martial to get on the end of.

The Foxes did have a great chance to score as they countered, but Ulloa’s shot produced a fine stop from De Gea with his foot from what seemed a certain goal.

Fresh legs in the attack were needed and right on cue van Gaal replaced the under performing Rooney with Memphis for the final twenty minutes. If ever United needed the young Dutch forward to step up to the plate it was now.

An instinctive turn and snapshot inside the area by Mata was only just deflected away for a corner after good play from Memphis.

The play had become slightly predictable from both sides. As they entered the final ten minutes it was clear United wanted the win more, but the home defence remained firm as they repelled all that was thrown at them, including a chance from Memphis at the far post when he fired over the bar under pressure from Morgan.

Darmian had the last chance of the match to be the hero as he fired a shot on goal from the edge of the box but his effort sailed over the bar.

It ended in a 1-1 draw and both sides will be angry after they both squandered the few chances they had to top the league. None more so than United as not for the first time this season they struggled to breakdown the opposition and too many players performed to a below par standard.

On a day records were broken it was Bastian Schweinsteiger who deserves to grab the headlines as he scored his first goal for the Red Devils and he could have possibly scored at least one more if it hadn’t been for Kasper Schmeichel in the Leicester goal. The German worked hard in the midfield and with four efforts on goal, which was three more than Vardy, he fully deserves the man of the match award.

The busy Christmas period is almost upon us as we enter December and the main hope for United will be that the injured players make speedy returns as van Gaal will need all hands on deck to get through a month with six games that starts with West Ham and ends with Chelsea with a small matter of a make or break Champions League tie in between.

Written by Editor
Should United stick with LVG?!
United Back on Track at Goodison