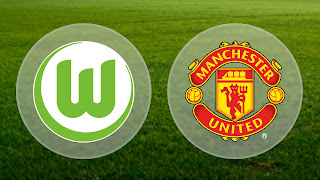 Disaster in Germany as Manchester United crashed out of the Champions League as they were beaten by a vibrant Wolfsburg and will now enter the Europa League as the third placed team in their group.

Going to Germany with the majority of the first team under doctor’s orders meant that van Gaal had to call on all his vast experience in European competitions to guide the Red Devils through the group stage. In the end ıt turned out to be not enough and wıth another poor showing from United they were resigned to the fact that they are just not good enough to feast at the table of the European elite.

The starting XI that van Gaal chose as the players to get the job done was as follows: De Gea, Darmian, Smalling, Blind, Varela, Schweinsteiger, Fellaini, Mata, Lingard, Memphis and Martial.

Varela was handed his first start for United at right back following his league debut as a substitute against West Ham at the weekend. Fellaini retained his place in the side despite a rather mixed performance on Saturday, but there was a return to the starting lineup for Memphis to once again try and warrant his place in the team.

United got the match underway inside a very noisy Volkswagen Arena.

The home side had a great chance as early as the third minute when former Chelsea player Schurrle found himself open inside the area, but he inexplicably fired his shot way over the bar. An early let-off for United and a sign that they were not going to get an easy ride.

United’s first effort on goal came from a Mata shot which Fellaini got in the way of but luckily for him he was adjudged offside to spare his blushes.

The opening goal came on ten minutes when Mata was involved again as his defence-splitting pass fed Martial who confidently ran into the area and planted a shot past the keeper to give United the all important lead.

However, it was a lead that only lasted three minutes as the home side immediately attacked and were rewarded when Naldo got in front of the defenders to volley home the equaliser. A soft goal and a rare lack of concentration by the usually tight United defence. 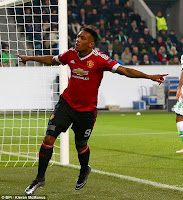 An open twenty minutes with both sides not afraid to attack which for a neutral must have been entertaining. A corner by Blind was met by the head of Fellaini, but it was well saved by the keeper right on the line. At this point of the match, it was all the away side as they looked to regain the lead before half-time.

Then on the half hour disaster for United as Wolfsburg took the lead through Vierinha after the away defence were once again caught cold by the home side who literally passed the ball into De Gea’s net.

Once Wolfsburg had taken the lead it seemed that the stuffing had been knocked out of United as they tried in vain to regroup and find a way back into the match. Passes went astray and heads went down. Even the reliable Schweinsteiger was guilty of giving the ball away, but he must have been grateful to see De Gea save from Draxler.

Another injury blow for United as Darmian limped off to be replaced by debutante Borthwick-Jackson just before half time.

Controversy on the stroke of half-time as Lingard’s superb effort from distance was ruled out for offside after it seemed the protests from the home side influenced the linesman’s decision.

Half-time and the main point of concern had to be the state of the defence as they allowed themselves to look so ordinary to gift the German side two soft goals. In 45 minutes, they had conceded the same amount of goals as their previous nine matches put together.

United offered no width in attack and with the poor contribution of Fellaini who looked uninterested in chasing back and apart from one header he didn’t offer anything of substance in attack as at times he didn’t look sure in what position he should be playing.

The second half got underway with no changes made by van Gaal.

Memphis was, at least trying his best down the left as he attempted to pick out Fellaini’s head with some good crosses. Unfortunately, the Belgian wasn’t up to the task of converting the chances.

After ten minutes the match had become stale and the only hope for United would be if the Russians of CSKA could manage a win away to PSV over in Holland. A tall order, but United would take help from any quarter.

On the hour mark, Bengali made a flying save to deny an acrobatic scissor kick from Memphis. Then Mata squared a free-kick to Schweinsteiger whose shot was almost diverted into the net by Mata and Lingard.

United was pressing more, but it was the home side who almost increased their lead when De Gea went walkabouts close to the edge of his area and when an attempted lob looked to be goal bound the keeper somehow managed to scamper back and reach the ball in time.

Martial had an effort straight at the keeper then at the other end De Gea twice denied the home side with a couple of outstanding stops.

Carrick and Powell were the final throws of the dice from van Gaal as they came on to replace Mata and Schweinsteiger for the final twenty minutes of a game that was looking to slip away from the Reds. It was a surprise that Mata was sacrificed rather than the ineffectual Fellaini.

United won a free-kick right on the edge of the box which was just powered wide from Memphis. It has to be said that was a great chance for United to get back into the game.

News filtered through that CSKA had taken the lead in Holland so as it stood United would go through even though losing. As the away fans started to show their excitement at the news, PSV equalised.

As the game entered the last ten minutes it looked increasingly clear that United had to find a piece of luck from somewhere and they found it from a corner which Fellaini headed into the ground and Guilavogui headed into his own net.

At 2-2 United definitely looked good to go through then heartbreak as Naldo restored Wolfsburg’s lead and PSV also went ahead in Holland. How fortunes can change in an instant.

Full-time and United bowed out of the Champions League after being outplayed by the hosts who showed the type of spirit that was needed more by the visitors as Wolfsburg twice turned the match on its head after United had scored.

It is difficult to put into words how depressing it is to see Manchester United succumb to a defeat in the fashion that they did in this match. Everything they did was at best ordinary, a word that is not usually associated with this great club, but one that is warranted judging by their displays of late.

The blame has to rest squarely at the feet of van Gaal and his coaches who obviously got their tactics wrong. After taking an early lead then to squander it so quickly is poor to say the least and showed a lack of concentration that is paramount when playing in Europe.

Those lapses in concentration in the defence can possibly be put down to the fact that they hadn’t played together as a unit and it showed itself to be true at precisely the wrong moments. However, excuses can’t change the result.

Now it is the reality of the dreaded Europa League and Thursday night football. In all honesty, the failure of qualification wasn’t decided in this match it was in the failure to beat PSV a fortnight ago at Old Trafford and in failing to do so put United in a position they shouldn’t have found themselves trying to get out of. The bottom line is they only have themselves to blame.

Thanks for reading on such a disappointing night.

Written by Editor
Pressure Mounts On United.
United Plucked By The Cherries.