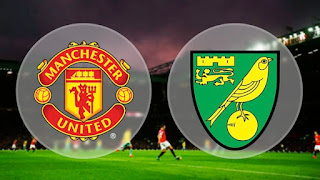 It never rains but it pours.

Rain lashed Old Trafford couldn’t provide a hiding place for Louis van Gaal and his side as the Canaries flew in and stole all the three points to pile the pressure on the Dutchman’s broad shoulders.

It should have been a welcome return to the comfort of Old Trafford for United. Unbeaten at the Theatre of Dreams in the Premier League this season they hosted newly promoted Norwich City who started the day in the bottom three so they couldn’t possibly have posed a serious threat to United’s aspirations.

Wait a minute! That’s exactly what everyone said last week prior to the away match to another promoted side Bournemouth and we all know too well what happened there. It is the first time in 69 years that United have lost back to back matches against promoted sides.

This time round, things looked a lot rosier for the home team prior to the match with the return to the side of Smalling, Jones, Young and Rooney, who made a landmark 500th appearance for the Red Devils.

The expectations from all quarters were high in a fixture that United had won at Old Trafford by the same scoreline, 4-0 on the last three occasions the teams had met.

United started the match in an attacking frame of mind and with Young filling in at right wing-back it provided an option the team haven’t had in the last few matches with his forays down the right wing offering width to the play.

The home side thought they had taken the lead as early as the ninth minute after some nice interchanging play on the left-hand side of the visitors penalty area that ended in Rooney sticking the ball in the net only to be ruled offside. However, the intent was there from the home team for all to see.

Carrick was the holding midfield player which was a fairly easy job as Norwich lacked conviction going forward which allowed Fellaini and Mata to be involved in every attack.

As Norwich had clearly come to defend and wait for the counter it was an opportunity for United to push numbers forward to look for that confidence boosting opener.

If anything, United became a little over ambitious in attack with some players rushing the forward pass rather than taking the time to deliver a quality final ball.

As the match approached the half-hour it had all been United who had enjoyed the lion’s share of possession and was performing better than in recent outings all they needed was a cool head to steady the ship in the final third.

Blind worked well down the left-hand side and provided some excellent deliveries that in all fairness, both Smalling and Fellaini should have done better with.

Rooney almost played Memphis in on goal with the pass of the match so far with a delightfully curled ball into the penalty area. Then a corner from Blind somehow evaded three forwards who were all waiting to pounce inside the visitor’s six-yard box. The Reds were getting closer with each attack.

Then five minutes from half-time Norwich proved that they clearly hadn’t read the script and caught United flat footed at the back as Jerome fired the visitors into a lead that nobody saw coming but could not be completely surprised by.

If one player should be blamed for the goal, then it has to be Phil Jones, whose rash lunge into an attempted tackle while Norwich attacked left his side in all kinds of disarray. He really didn’t need to commit himself into the challenge and his basic error cost his team and it’s not the first time he has been shown up in that way.

Half-time and there was a deflated feeling among the faithful as boos rang around the famous ground as the players trudged off the pitch heads hung, but in all fairness, this had been a better display from United and surely all the forward momentum would pay dividends in the second half to turn the match on its head.

Attacking the famous Stretford End United started the second half in the rain with a point to prove and that was if they had the desire, belief and commitment in themselves to turn things around.

It was the visitors who started the half with a spring in their step as if they had a new found belief that United was there for the taking and it was that man again Jerome, who rubbed salt into United’s wounds by feeding his teammate Tettey who toe poked a strike past a despairing David De Gea to put the visitors into a two-goal lead.

Once again part of the problem was Jones who was woefully caught out at the back and was left wanting as Rooney lost possession on the half way line.

An uphill struggle had turned into a mountain to climb for van Gaal’s side one that they didn’t look like achieving based on recent outings.

The hour mark saw the introduction of fans’ favourite Herrera in place of the disappointing Fellaini. A change that was met with huge cheers.

Six minutes later Martial pulled a goal back for United after he had fought well in the box to win the ball and smacked it into the back of the net. After the ball landed at his feet from a Rooney flick the French youngster showed great ball control to work himself a shot that gave the home side a new belief.

Since the introduction of Herrera, United looked a more dangerous side with the Spaniard providing the spark that was needed while his side were on the attack. His compatriot Mata came agonisingly close with a free kick that looked for one second that it would bend low into the net until the keeper Rudd managed to beat it away.

Norwich almost made it three and would have if it hadn’t been for a save by De Gea low down to his left following an effort from Mulumbu. At the other end, it was the same old sad story of overhit crosses and wayward passes that blighted United’s chances of finding a leveller. Smalling did have one last chance to grab a late point, but it wasn’t to be.

The game was a lost cause for United and it now throws up a serious doubt about not only their title credentials, but also on the state of the team and where they go from this point on.

It’s hard to put a finger on what the problem is but the pressure seems to be clearly playing on the players’ minds as they struggled to break down yet another defence and seemed bereft of ideas which have to stem from the training ground.

Not only are the forwards still struggling to find the net, seven shots on target in their last four Premier League home games, but now the usually reliable defence has started to leak goals. Granted, they had the liability of Jones playing at the back, but even so something is not right when a team of internationals can’t beat Norwich at home.

This was United’s third defeat in a row and now they are without a win in the last six games it doesn’t bode well for the upcoming final fixtures of 2015 Stoke City away and Chelsea at home.

Thanks to all my readers and I wish you all a very Merry Christmas.