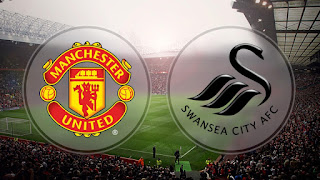 Manchester United began the year in a positive mood with a hard fought victory over Swansea City at Old Trafford.

Goals from Martial and Rooney, the first time they have scored in the same match, ensured that United kick started 2016 with a much-needed win and a valuable 3 points.

United’s first match of the year and it couldn’t have been against a trickier opponent than the team from South Wales, who have held a certain jinx over the Red Devils and van Gaal.

Swansea had won four out of the last five meetings between the two sides in all competitions and were the team that welcomed van Gaal to the English game when they beat his side at Old Trafford in his first match in charge.

So, in United’s current predicament of not having won in the last eight games of 2015, the Swans would certainly provide a stern test for United.

Van Gaal decided to make one change from the side that performed to a level that deserved more than the point they obtained in the goalless draw against Chelsea and that was to recall Jones into the defence in place of Darmian.

Swansea got the game underway at a rain-soaked Old Trafford but the weather didn’t dampen the home fans voices as they got behind their players from the start. It was Herrera, who almost worked his way into a shooting position within the first minute only to be denied as he readied to pull the trigger.

The home side started the match as they had left off against Chelsea on the attack with Blind and especially Young providing openings down the wings.

The visitors sat back looking to attack on the counter, which they did when Ayew found some space but failed to make good use of the ball. Something that United would have to be wary of.

Swansea set up to put pressure on United whenever the home defenders had the ball which seemed to unsettle Smalling and his defenders who tended to rush the play out of their own half.

At the other end, United lacked ideas as to how to break through the back four as they tried to play their way through the middle when the width provided by Blind and Young would have been the better option to get behind the defence.

A cross delivered from Young fell to the unmarked Rooney at the far post, but his weak effort hit the side netting. Having only scored a handful of goals in 2015 that was a perfect chance for the captain to start the new year with a bang.

With thirty minutes on the clock, it was the same old familiar story of United being unable to break their opponents down and produce the goals that would not only lift the players but also the atmosphere within the Theatre of Dreams.

De Gea was made to work as he caught an effort from Routledge at full stretch. Martial was bundled off the ball on the edge of the box and it was the quick thinking Herrera, who took the kick quickly and played in Mata. His first effort was blocked then the keeper Fabianski saved the poor follow up shot far too easily.

Another cross from Young looped into the area and was met by the head of Rooney. Unfortunately, he was surrounded by three defenders and even though he did well to rise above the rest he failed to find the power needed.

Schneiderlin was having an off day as he was guilty of under-hitting his passes and on a couple of occasions was lucky to get away with handball decisions that could have easily gone against him.

Mata came close to grabbing the opener as he let fly with a shot inside the area, however, Fabianski collected the ball low on his line.

The only outlet for United was on the right wing as Young continued to play some great balls into the danger area. Just before half time, Smalling was cautioned for a foul on Ayew. There was one more chance for Rooney to head towards goal from yet another Young cross, but Fabianski was well placed to save on the line.

Half time and it was back to the mundane play that has dogged United for the last two months as they lacked inventiveness in front of goal and seemed bereft of confidence and ideas to put the dire situation right.

As the players trudged off the pitch they did so to a chorus of boos from the restless faithful that would surely spur them on to perform better in the second half.

United got the second half underway as they attacked the Stretford End with the one change being made by van Gaal and that was Darmian replacing Jones in defence.

Rooney forced a corner within seconds of the start with a deflected shot. Blind, the main corner taker, delivered a ball that the Swansea players put behind for another corner. Young picked up the clearance and sent over a cross that eluded Rooney, but there was Martial to power home a header to give the stadium a huge lift. Just the start that was needed from the Red Devils.

Young was proving to be the main tormentor of the visitors as he created chance after chance for United.

The goal within two minutes of the restart was exactly the tonic United needed and it also had the desired effect around the ground as the young French striker once again proved what a great goalscorer he is.

The home side seemed to have an air of confidence about their play winning tackles and being first to the loose balls. Rooney almost made it two when he managed to get a shot on target despite being marked by three players.

If anybody deserved something for his hard work it was definitely Young, who was running his socks off down the right wing and playing some delightful football, maybe he was the only one not to indulge too much over the New Year.

On the hour mark, Herrera side footed a shot over the bar and at the other end there was a warning as De Gea could only watch as Ayew headed against his near post.

Mata and Martial played a brilliant one-two inside the area, but the Frenchman’s touch was a little heavy in the end. That style of play is exactly what has been missing over the last few months and was a welcome sight.

Martial obviously buoyed by his goal was proving to be a handful for the visitors as they struggled to contain his runs.

Then in the 70th minute, all the hard work was undone as Swansea grabbed an equaliser when Sigurdsson headed home unchallenged in the box.

Now it was all about how the home side would react to the setback after they had played so well prior to the equaliser.

React they did and in the 77th minute after some brilliant approach play by Martial United grabbed the lead through Rooney, who skillfully flicked the ball home after Martial showed great footwork to get past the defenders on the byline and played the ball into the path of his captain.

That goal puts Rooney in the outright position of second in the United all-time scoring record with 238. Only Sir Bobby Charlton is ahead of him.

Once the second had been scored van Gaal made his next change of the match by taking off the exceptional Young and replacing him with McNair.

Five minutes before the end, Blind clumsily brought down Barrow in a dangerous area and was booked for his troubles. 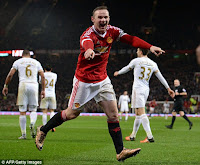 With the minutes ticking away the nerves were palpable around the great stadium as Carrick replaced Herrera for the four minutes of added time. It was great to hear the cheers from the crowd in recognition of the work that the Spaniard had put into the match.

Carrick was making his 400th United appearance and immediately joined his teammates as they watched his keeper make his usual breathtaking stop from an effort at the death by Williams. The last action of the match saw the Swansea keeper push up for a corner which he headed just wide of De Gea’s post.

Full time and, at last, a win for Man United that ended their dismal run and it was certainly nice to hear the cheers from the crowd as they made their way down the tunnel. Overall, it wasn’t a performance that will be remembered, but the way they grounded out the result surely bodes well for the future. At times, they looked unstoppable, but as usual, they made hearts flutter with some nervy defending.

There were a handful of players who stood out including Mata and Herrera. Rooney, who spearheaded the attack where he should always be, Young never stopped digging out crosses from the right, but it has to be that man Martial who deserved the man of the match plaudits after not only scoring the opener and providing the assist for Rooney’s winner, but he was a continual thorn in the Swan’s defence for the whole 90 minutes.

All credit to the team who didn’t buckle under the stress of conceding the equaliser and let’s hope this victory can provide a platform for a decent run over the next few weeks.

The transfer window is now open and the opportunity to reinforce the forward line and defence with players who can add quality and ability to the current squad is of paramount importance if United are to mount a challenge on three fronts.

This week saw striker Will Keane recalled from his loan spell at Preston to help shore up United’s attack. This was all well and good, however, it does beg the question why van Gaal allowed James Wilson to go out on loan? Keane has managed 2 goals in 20 matches compared to Wilson’s 2 from 8.

Next weekend sees the return of the FA Cup to Old Trafford with the visit of Sheffield United. It would be great for the manager and players to take the competition seriously as it has been far too long that the club have held up the old trophy.