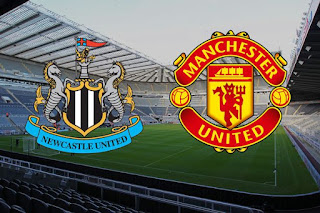 United boring? Not on this evidence.

Manchester United let a two-goal lead slip through their fingers in a night of drama and controversy at St. James’ Park.

Having done what they had failed to do on numerous occasions by scoring not one, but two goals in the first half of a game United then proceeded to shoot themselves in the foot by allowing Newcastle to fight their way back into the match after Rooney had looked odds on to have sealed all the three points with a wonder strike.

Paul Scholes noted after the weekend victory that United were boring to the core and was happy he wasn’t playing in the current side. The fact is that United aren’t exactly filling their fans with confidence even though they have won the last two games, just. Boring is not a word that can be used for this match which produced goals, debatable penalties and even an animated Louis van Gaal.

There was no rest for the wicked and that was the case for Man United, who on the back of their late, late win over Sheffield United in the 3rd round of the FA Cup were off to the North East to tackle Newcastle United in the Premier League looking for their third win in a row.

Managed by former United coach Steve McClaren the Magpies have had a torrid time this season and are rooted in the bottom three of the league and were knocked out of the FA Cup at the first time of asking by Watford.

Earlier in the season, The Magpies frustrated the hell out of the Red Devils at Old Trafford holding out for a 0-0 draw. Since then it seems that Man United has gone on to frustrate everybody with their style of play including former players.

The biggest problem remains a lack of goals which stems from the lack of chances being created in the final third of the pitch. Former United player Ray ‘the crab’ Wilkins would have loved to play in the current midfield as sideways is the latest United tactic.

To address the goal scoring problem van Gaal made three changes from the side that scraped through in the FA Cup out went Mata, Schweinsteiger and Borthwick-Jackson in came Young, Schneiderlin and Lingard. The starting XI: De Gea, Darmian, Smalling, Blind, Young, Schneiderlin, Fellaini, Herrera, Lingard, Rooney and Martial.

A minute’s applause for the recently deceased former Magpies goalkeeper Pavel Srnicek preceeded the kickoff and this seemed to have a positive effect on the home side and their fans as they had the majority of the ball in the opening minutes.

Fellaini, playing alongside Schneiderlin in the midfield, started the game by conceding a few free kicks, then his ungainly style resulted in a rare first-half goal for the Reds as referee Mike Dean controversially turned the game on its head by awarding the visitors a penalty in the 9th minute after Fellaini had made a nuisance of himself in the opposition penalty area and Mbemba was adjudged to have handballed the Belgian’s header.

It was captain Rooney, who coolly and calmly stepped up to slot home his third goal of the new year and his 240th goal for United to make sure his team started on the front foot.

A soft penalty to say the least, but United will take anything that goes their way at the moment.

The goal had the desired effect on United as they used the width of the pitch to stretch a suspect home defence with Martial looking the liveliest on the right-hand side of the attack.

Fellaini was booked after a foul in the Magpies’ area after it looked more likely another penalty would be awarded for a handball by the defence.

Rooney went close to scoring his second after he was played through by Lingard but his effort went agonisingly wide. That was immediately followed by a great chance for the home side as once again De Gea, making his 200th appearance, saved his side this time with his legs from what would have been a certain goal by Wijnaldum.

Just before the half-hour mark, Herrera became the second United player to be cautioned for a clumsy tackle. This was followed by a penalty shout for the home side as Lingard clattered clumsily into Janmaat. Thankfully the referee waved play on. Then in the 38th minute, the United youngster made a name for himself at the right end when he finished a smart United move to make it 2-0.

The interchange saw Herrera feed Rooney, who after a clever switch played the ball brilliantly into the path of Lingard, who in turn finished off the move in some style by placing the ball through the keepers’ legs then celebrated with a bit of ‘Dabbing’. 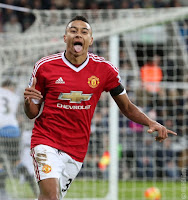 Of course, it wouldn’t be a United game without a slip up at the back and it came three minutes before half-time when Wijnaldum pounced on a poor Fellaini headed clearance to put the home side back into contention.

Newcastle’s Coloccini tried his luck from distance and thankfully his blast went over De Gea’s bar, then the ever lively Martial had a great opportunity to extend the lead on the stroke of half-time but after doing all the hard work he pulled his shot wide of the mark.

Half-time and after so many first halves without a goal United had two and it really should have been more as the home defence struggled with the visitors pace in attack.

Rooney was having one of his better matches of the season playing in the position where he should always be. He was aided by Lingard and Martial who at times made the defenders look pedestrian in comparison.

The second half got underway with van Gaal having made no changes to his side as they looked to build on the positives of the first half and put the game to bed as soon as possible without allowing the hosts back into the match.

De Gea once again proved how invaluable he is to the side when he was made to block a one-on-one effort by Sissoko. He must wonder at times what his defence is up to as they were easily deceived by the twists and turns of the Newcastle forward.

Van Gaal showed a rare moment of emotion on the bench as his anger boiled over when Lingard missed what has to go down as a sitter from a fantastic unmarked position inside the penalty box. The creative play from Herrera and Martial in the build up deserved a better ending. What a miss but hopefully it wouldn’t come back to haunt Lingard.

On the hour mark, it was end to end football as both sides went in search of the all-important goal for different reasons. A Rooney run ended with him losing the ball before he could manage a shot and then the home fans leapt to their feet as Fellaini seemed to have brought down Colbeck. At this point, the match resembled a classic cup tie rather than a league game.

Van Gaal made his first change of the match when he replaced Lingard for Memphis. Hopefully, it wasn’t for the miss a few minutes earlier if so, that would have been harsh.

Following the change, Newcastle attacked and were awarded a very debatable penalty when Smalling was penalised for wrestling Mitrovic to the ground. Up stepped Mitrovic to convert the spot kick to bring the scores level.

Maybe Mike Dean had thoughts of making up for his award of a penalty to United as it was a case of two players scrapping in the box. The forward quite clearly was doing the majority of the tugging as he had his hands round Smalling’s throat at one point and looking at the defenders ripped shirt it was the wrong decision.

After the equaliser, it was Newcastle who could smell the fear within United’s defence. They even managed to score a third, however, luckily for United it was disallowed for offside.

How would United react after seeing their two-goal lead evaporate in unfortunate circumstances?

Van Gaal had a plan of his own as he replaced Mata with his compatriot Herrera for the last fifteen minutes with the hope of dragging the visitors back into the lead. It certainly had the desired effect.

In the 79th minute Memphis collected the ball on the left wing then cut inside where he tried a shot which was only cleared into the path of Rooney, who rifled home a 20 yard drive to restore the visitors’ lead. What a strike it was and it came at the perfect time to knock the stuffing out of Newcastle who were full of confidence following their penalty.

Fellaini had an excellent chance to put the game beyond reach, but his close range shot at the far post was saved by keeper Elliot.

The brilliant away support was in superb voice as they told Alan Shearer to cheer up and cheer up he did as his side equalised with a deflected strike by Dummett in the last five minutes to make it level at 3-3 and break the visitor’s resolve.

Both teams ended the match looking for the winner but it wasn’t to be and the final whistle blew on an intriguing game where the spoils were shared.

The missed chances that fell to Lingard and Fellaini did in fact come back to haunt the Reds as the match ended all square. It was a definite case of two points dropped by United after letting the lead slip through their fingers which was a shame as they had finally found a way to score but at the same time concede.

It really doesn’t seem to be going van Gaal’s way at the moment and there is a small matter of a trip to Anfield to face arch rivals Liverpool and their latest coach Klopp. Let’s hope van Gaal and the players can build on the positives of this match by the time next Sunday comes around. At least man of the match Wayne Rooney has found his shooting boots after a double and an assist.