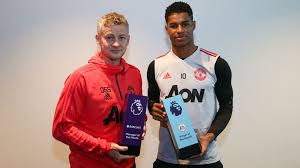 Solskjaer and Rashford best in the Premier League for January

Ole Gunnar Soslkjaer and Marcus Rashford have been the best in their job in the Premier League for the month January.

Manchester United earned 10 points from 12 available with wins over Newcastle United, Tottenham and Brighton and a draw with Burnley during the month.

Solskjaer was the only manager to get three wins in January and he totally deserved the Manager of the Month award.

Ole was full of praise for the backroom staff that he has around him and said that it is an award for all of them:


Honestly, I’m a little bit against individual awards for a team sport, but it means we’ve been the team of the month, so this is both for the staff and the players.

Opinions are being thrown about in that office and in the end I’m the “lucky one”that has to make a decision on who to leave out or to play. We want to be winning games. We want to move up the table and this is the start of it.

Marcus Rashford won the January Player of the Month award, as the 21-year-old England international scored three goals in four league games, including winners against Spurs and Brighton.

Rashford continued his excellent form in February as well, as he netted the only goal in United’s 0-1 win at Leicester. This is what Rashford said for manutd.com when he was collecting the award:


It’s always good to pick up individual awards but I think the way we’ve performed as a team has been very good over the last few weeks. The aim for us now is to just continue it, but we have to take it game by game and one step at a time.

Consistency is something you always want to improve and, for a young player, it can be difficult but I think over the last two months we’ve got it right.

Marcus Rashford was the first Manchester United player to win the award since Zlatan Ibrahimovic in December 2016.

Manchester United “won a double” for first time in eight years, as Sir Alex Ferguson and Dimitar Berbatov were Manager and Player of the Month in January 2011.

We would like to congratulate Ole and Rashford for the awards and hope they will continue with the excellent work they are doing in the past few weeks.